Why was Ephesus important to Christians

Dedicated with gratitude to my doctoral supervisor Prof. Christoph Burchard on the occasion of his 70th birthday.

Ephesus is an Ionic colony whose beginnings go back to the 2nd millennium BC. Go back BC. According to legend, Androklos, a son of King Kodros of Athens, founded it on the basis of an oracle.

At the time of the apostle Paul Ephesus, which translates as the "city of the queen bee", had around 200-250,000 inhabitants. This made it the fourth largest city in the Roman Empire after Rome, Alexandria and Antioch in Syria Ephesus the Pergamoner from 190 BC, then the Romans from 133 BC, who made the metropolis on the Kaystros the capital of the province of Asia Minor (Asia Minor) The most important excavations were found on the slopes of the Pion and Nightingale Mountains , where Lysimachus, one of Alexander's generals, rebuilt the city.

The city once owed its wealth to its important port, which later increasingly silted up. In addition, the 6th century temple of Artemis, one of the seven wonders of the world, was an important source of income. Artemis (Latin "Diana") was a hunting and fertility goddess who was also known under the name "Astarte" in the eastern Mediterranean. Here at this sanctuary began the conflict about which the Acts of the Apostles tells us, and in which Paul is actually more of a marginal figure:

The unrest was triggered by a silversmith named Demetrius, who obviously feared for his income as a manufacturer of small artemisian statues. It can no longer be said with certainty whether he is identical to the member of the temple board of directors of the same name who is recorded in writing. He accused Paul of having damaged the business of the silversmiths with his monotheistic preaching. In addition, the apostle had reduced the reputation of Artemis, whereupon the angry crowd chanted "Great is Diana of the Ephesians!"

The Macedonian travel companions of Paulus Gaius and Aristarchus are dragged into the 22,000 seat theater, which is only a few hundred meters away from the Artemision. It is remarkable that Paul is absent from this second scene. It is possible that it did not appear originally in this story and was only added secondary by Luke. The fact that it is not he but his disciples who are prosecuted can be seen as a typical case of aggression shift: If the guilty party is not within reach, one lets one's anger out on a substitute object. 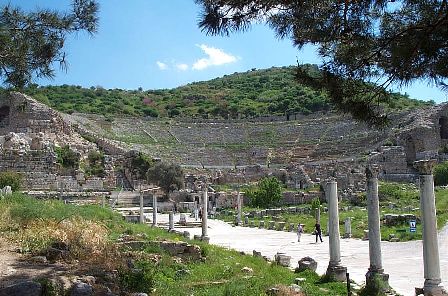 It is also noticeable that the Jew Alexander also speaks in the theater, but is shouted down by the raging mob. What he was trying to say can only be guessed at. Did he want to distance himself from the preaching of the apostles? But actually the message of the apostles was well Jewish. The prophets of the Old Covenant had already proclaimed that the gods made with hands are not gods. In any case, it is clear that outsiders still clearly perceived Christianity as an internal Jewish group. The hatred of the crowd is directed against both! In Ephesus, both fell victim to anti-Semitism, which was widespread in antiquity and which was based on an explosive mixture of xenophobia and social envy.

What the Acts of the Apostles fails to mention, but emerges from Paul's letters: the conflict had unpleasant consequences for the apostle, despite the intervention of the Asiarch, who broke up the crowd: He was thrown into prison where some of his letters were written (the so-called Captivity Letters, including Phlm and Phil). Other letters, too, probably go back to Paul's stay in Ephesus, which lasted about 3 years: Romans, 1 + 2 Cor and possibly also Gal.