Why can't you run underwater quickly? 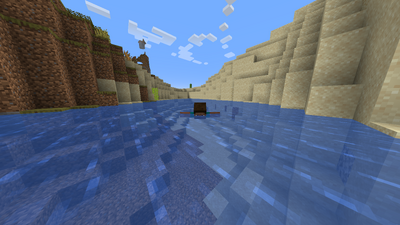 A player swimming in the water 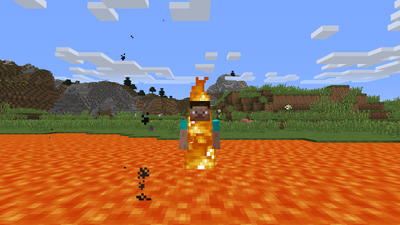 A player swimming in lava

swim is the horizontal movement in water or lava. Diving is vertical locomotion under water or lava. Drown is the damage you take underwater after a while, and the associated death.

Swimming and diving with the player

If the player walks into water or lava, he will sink. Movements are slowed down under water or lava. You can walk or dive on the bottom of the body of water or the lava lake. Emergence is done by pressing the. If you let go of it again, you sink down. For a quick dive you press the sneak button, like when flying in creative mode. You can dive in all directions by pressing and the direction control buttons at the same time.

To swim on the surface of the water or lava, you have to keep it pressed down, then you can swim with the directional control buttons. In normal swimming you make running movements (as in flying). However, if you start to sprint underwater, the player figure lies down horizontally and does Swimming movements. This allows you to move much faster in the water. In addition, you can swim horizontally through a 1-block hole (like flying with Elytres), which is not possible with slow swimming because you are moving upright. If a dolphin is 10 blocks or closer at the same time, you get the status effect "Dolphin's favor" for 5 seconds. This doubles the speed when swimming fast. Fast swimming is not possible in lava.

Swimming consumes energy and you get hungry.

The air supply under water is in the Breathing air display with small air bubbles that appear above the hunger indicator. Underwater you lose an air bubble every 1.5 seconds. As soon as you get your head out of the water, the air gauge fills up again relatively quickly. So you can swim upwards even in very high waterfalls: You just have to keep your head out of the water to the side (not too far, otherwise you will fall into the depths). As soon as the breathing air display is exhausted, you lose 2 (

) Life points until you die.

Under water you can refill the air supply in bubble columns. However, they also cause an upward or downward movement:

A short-term air bubble is obtained by filling an empty bucket with the water in front of you. If you immediately tip it out again to fill it up again (hold the right mouse button down continuously) and stand in front of a wall, 23 filling processes are enough to completely replenish the air supply.

A permanent air bubblein which one standing can breathe is generated with the following blocks:

A permanent air bubbleinto which one only horizontal can swim into it (sprint swim), is generated with the following blocks:

Blocks with air that cannot be used:

In lava if you have no air supply, you cannot drown in lava. Instead, you usually get burned very quickly. With fire protection you can swim in lava. Diving is also possible, but you hardly see anything. You can also swim up lava falls, whereby you cannot drown, but you can fall out of the jet.

Problems with swimming and diving

When swimming or diving in water, one moves at a lower speed and can only mine blocks more slowly than on land. Especially when diving, the view is restricted and the arm is shown shifted. There are various means to prevent these rather unpleasant side effects.

If you want to stay underwater for a certain amount of time, you can use potions to improve visibility or to prevent drowning.

There are also enchantments specifically designed for being underwater:

As long as a dolphin is 10 blocks or closer, you get the status effect all the time Favor of the dolphinas long as one makes swimming movements ("sprint swimming"). This doubles the speed.

For a longer period of time under water, it is advisable to set up an Aquisator, which has the status effect Ocean power confers. This gives you unlimited breathing air, a clear view and an increased rate of degradation under water.

Apart from the low speed, swimming and diving in lava do not have these problems. However, you have to protect yourself from being burned. This can be done by the following means:

In the beginning you will cross larger rivers or smaller oceans by swimming. However, if you often use certain routes that lead through rivers or oceans, you should consider a boat as an aid, because it allows you to cross a body of water more quickly. You can then expand the waters to make it easier to travel through. Maritime transport facilities are required for this. Walking on water is with enchantmentIce skaters possible for the boots. One irreversible way to remove some water is to use a sponge.

Lava, on the other hand, is only built over, cooled to obsidian with water, skimmed off with a bucket or replaced by other blocks, sand and gravel are good for this.

Swimming and diving in creatures

Most creatures can swim or even live in water. If they get inside, the undead sink to the bottom, they cannot drown. The other creatures try to get to the surface of the water. Once there, they swim, jumping up and down slightly. They can do this indefinitely. They only reach the bank by chance, they do not swim towards it in a targeted manner. If they are under water and do not reach the surface in time, they drown. There are some exceptions and special cases: