Is there a Qantas Lounge in Dubai

This lounge is the largest and newest Emirates First Class Lounge in Dubai and it is probably also the largest First Class Lounge in the world, as it extends over the entire terminal. You have to consider that Terminal A in Dubai is the Emirates Airbus A380 Terminal and has countless passenger boarding bridges for the superjumbo. With 14 first class passengers per flight, a lot can come together here, which is why Emirates probably also needs a very large first class lounge.

The Emirates First Class Lounge in Dubai is located in Terminal 3 at the A Gates and can be reached via an escalator in the middle of the duty free shops. The lounge is very well signposted and when you stand in front of the entrance to the lounge it is no longer possible to overlook it.

In addition, Qantas First Class passengers and Emirates Skywards Platinum cardholders have access to the Emirates First Class Lounge before their departure with Emirates or Qantas.

After we have reached the entrance of the Emirates First Class Lounge, you will find a huge reception, which is more reminiscent of a large hotel than an airport lounge. Here our boarding passes were scanned and we were asked into the lounge without further comment. 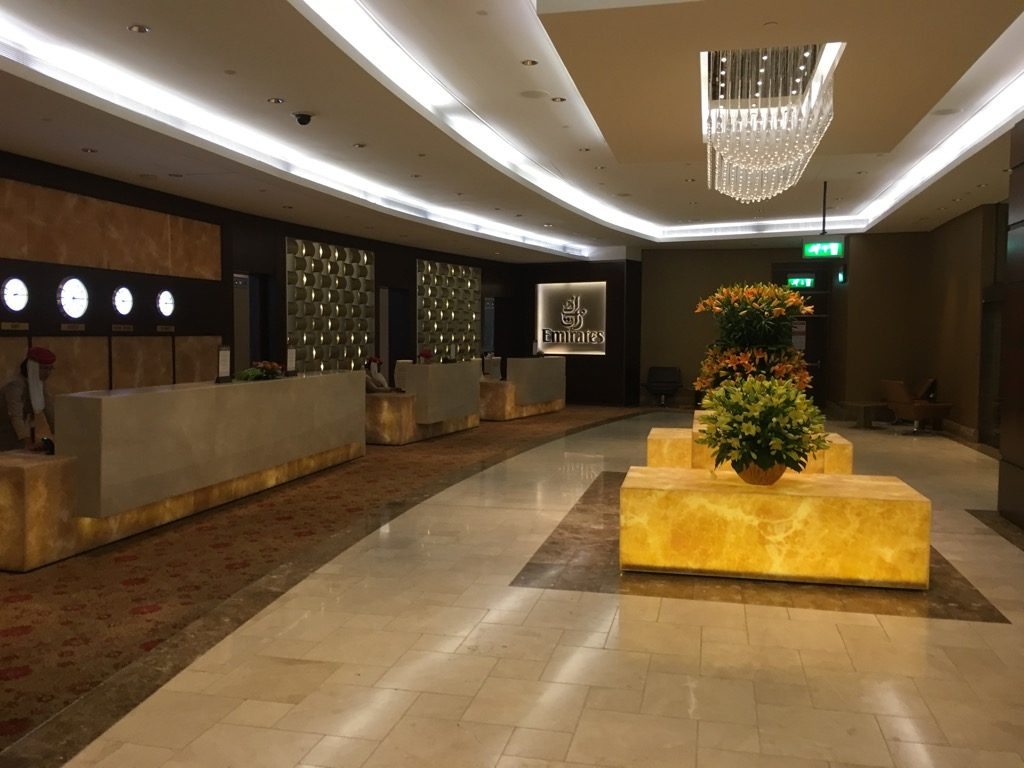 Behind the front desk you can turn left or right and you will find two completely identical, mirrored lounges here.

After we decided to turn left, a bit of confusion arose, because you didn't feel like you were in a first class lounge, but in the middle of an orphaned terminal. After entering, you walk through a series of duty free shops before you get to the actual lounge.

The Emirates First Class Lounge Dubai in Terminal A is huge and doesn't seem very inviting at first. This is mainly due to the two endless corridors, on which different seating groups are lined up.

However, I don't think that guests often sit here, because the lounge has much nicer areas to offer.

In the Emirates First Class Lounge you will find a large number of different lounge areas with a wide variety of seating groups. These are all designed in an appealing way, but because of their size they don't seem particularly exclusive and inviting to me.

Visually, I really liked the cigar lounge. If there wasn't smoking here, I would have loved to have lingered here longer. Even if it wasn't for me, it sure is a smoker's paradise.

In addition to the beautiful armchairs, guests can have cigarettes and cigars brought from a humidor free of charge and drinks are served at a bar. The whole thing looked like a clubhouse from the 60s to me.

There was another business center just beyond the entrance. Like the entire Emirates First Class Lounge in Terminal A, this was huge and offered a large number of workstations and small conference rooms.

Emirates has also thought of a playroom. Here the young guests can let off steam to their heart's content. However, you can no longer see so young guests, especially at the game consoles. The fact that CNN and not Disney Chanel is on the TV in the children's room, therefore fit again.

The real highlight and the absolute strength of the Emirates First Class Lounge in Dubai Terminal A are its own boarding gates in the lounge. Here, passengers can board all flights from Terminal A directly from the lounge without having to leave the lounge again.

Since only a maximum of 14 First Class passengers and a handful of Emirates Platinum board at these gates, you probably don't have to worry about queues here. 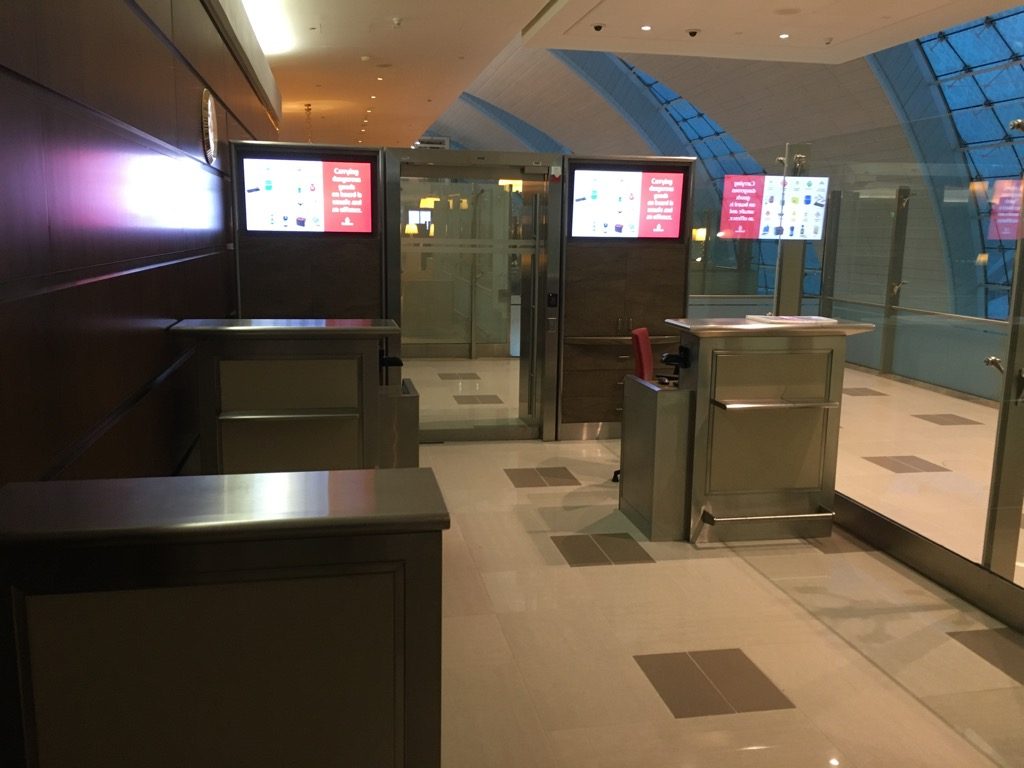 Emirates only offers recliners or non-flat loungers, on which you can rest, but not really sleep. You don't have your own small room either, but are only separated from the other guests by half a wall or a curtain.

If you consider how many passengers change in Dubai at night, I honestly expected a little more here, especially since most of the passengers who were in the lounge during the night were in the relaxation area.

The Emirates First Class Lounge has several food stations and a restaurant with service. In the back of the lounge there is a huge full bar and a buffet where guests can help themselves. However, the focus here is more on snacks than on real food.

If you want to eat properly, you should visit the restaurant. Here, like in a good restaurant, you are served by a waiter and can order various dishes from a menu.

After a short nap in the relaxation room, the departure gate for our onward flight to Frankfurt was displayed at the B gates, which is why we made our way to them. Another Emirates First Class Lounge can be found here.

The Emirates First Class Lounge in Dubai Terminal A is probably the largest first class lounge in the world and has a lot to offer, but to be honest I didn't really like it. It's also a matter of taste, of course, but I found the lounge just too big and impersonal.

You can certainly wait a few hours for your departure here and I would plan at least three to four hours to experience the entire lounge. Except for the sheer size, there was no real wow factor here.

Here you can find the other parts of this trip report: