What was known about Majd al Assad

The ruling clan of Damascus

When residential areas in Syria are shelled, fighter jets rise and troops fight for control of Aleppo, then these are not the decisions of an all-powerful dictator, but those of the management staff on which Bashar al-Assad depends. Its members include relatives, long-time chiefs of the secret service and the military who believed they were safe in the center of the capital Damascus until mid-July 2012.

On July 18, a bomb destroyed this illusion. Four of Assad's closest confidants died in the attack on the National Security Council - including his brother-in-law Asef Shaukat, whose death hit the Assad clan particularly hard. Shaukat, together with Assad's younger brother Maher, had dominated the security apparatus for years. Now the Syrian president can only rely on his brother one hundred percent. 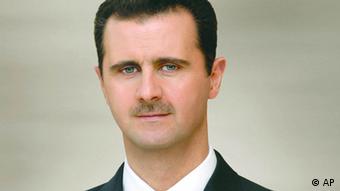 Bashar al-Assad is not an absolute ruler

Maher al-Assad is in command of the Fourth Division of the military, which is leading the crackdown on the uprising in many places, as well as the Republican Guard, which is also responsible for protecting the Assads. Both units are considered well equipped and loyal. Maher himself is said to be the tough right hand of Bashar, he is said to be cold-blooded and strong in leadership. In the current crisis, he bears the main responsibility for the violence against demonstrators and the shelling of "opposition" residential areas and towns.

As a potential successor to his father, Maher resigned after the accidental death of his eldest brother Basel in 1994 because of his quick-tempered character. In 1999, he is said to have shot his brother-in-law Asef Shaukat in the stomach. This survived and the two later became a security strategy team out of power-political interests.

Although Shaukat is now dead, it is worth shedding light on his connection to the Assads, as it says a lot about the conditions within the family. The 62-year-old was married to Bushra, the older sister of the originally four Assad sons (in addition to the crashed Basel, Majed, another brother, died in 2009 after a long illness). In the mid-1980s, the young Alawite officer met the only daughter of long-time President Hafiz al-Assad, Bushra, who was then studying pharmacy at the University of Damascus. The connection was not approved by either the father or the eldest brother.

Basel is said to have had Shaukat arrested a total of four times to prevent meetings with his sister. In vain. Bushra is considered intelligent and assertive, ideologically she should be the hardliner of the family - known for her uncompromising anti-Israeli and anti-Islamist stance. How intransigent she can be became clear a year after Basel's death when she married Asef Shaukat, ten years her senior, against her family's wishes in 1995.

The support of Bashar 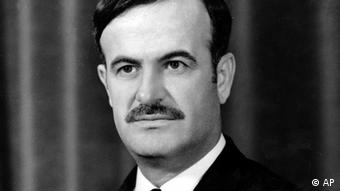 Formerly the most powerful: Hafiz al-Assad

To avoid a public scandal, Hafiz al-Assad officially accepted the unwanted son-in-law into the family shortly afterwards. He made friends with Bashar, who increasingly relied on Shaukat for security issues. Convinced of his abilities, the aging President Shaukat instructed "never to leave Baschar's side." And in fact the general supported the young future head of state in the background.

At Hafiz's funeral in June 2000, Shaukat stood demonstratively at Bashar's right. Shaukat headed the military intelligence service for years and was Deputy Minister of Defense since September 2011. As an influential puller within the security apparatus, Shaukat led the struggle for survival of a ruling family to which he himself owed his rise. 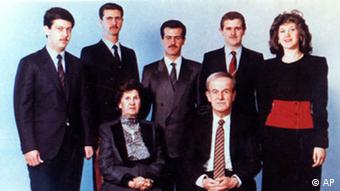 Anisa Makhluf, the now well over 70-year-old mother of the Assad siblings, probably plays a unifying role behind the scenes. It should have a balancing effect in the event of disputes. Anisa's most important contribution to securing power comes from her relatives, the extended Makhluf family, because it is they who secure the regime financially. Her brother Mohammed Makhluf, the former financial advisor to Hafiz al-Assad and now 80-year-old senior of the clan, turned the once poor Alawite family into a widespread economic empire.

With their activities in telecommunications, trade and power generation, in the oil and gas industry, and in the banking sector, the Makhlufs now control most of the Syrian economy. Mohammed's eldest son, Rami Makhluf, is considered to be the richest businessman in the country. As the owner of Syria's first mobile operator Syriatel, he has become a symbol of nepotism and kleptocracy among the population and, as such, one of the most hated regime representatives. Rami's brothers and another maternal cousin hold senior secret service positions.

Bashar's relatives on his father's side are also interwoven with the impenetrable network of the military, secret services and militias. Among her children are high-ranking army representatives, and some of the cousins ​​are involved in the machinations of the dreaded Shabiha militias. All these family members are on the sanctions list of the European Union because they command, are responsible for, finance or otherwise promote violence against civilians.

Overall, the Syrian power apparatus relies on so many loyal members and is so widely ramified within the presidential family that even the departure of a key figure like Asef Shaukat does not seem to lead to a collapse. This is important to know for all the simulation games that concern the time after the Assad regime. Because then it comes down to who played what role in the security apparatus, who must be held accountable, what should happen to the secret services and which regime insiders could contribute to an orderly transition.

Kristin Helberg worked as a correspondent in Damascus for many years. In September her book "Hot Spot Syria - Insight into a Locked Country" will be published.