Xiaomi: 5G cell phone for less than 300 euros this month

Xiaomi Germany uses the hashtag "5GForEveryone" to advertise a new 5G smartphone with a particularly low price on Twitter. The manufacturer promises an "amazing price-performance ratio". The still unnamed mobile device is part of the popular Mi-10 product family and is located below the Mi 10 Lite. An unspecified Qualcomm chipset of the 7 series is supposed to power the cell phone and bring the modem for the advertised fifth generation cellular with it. Xiaomi wants to release its new budget 5G smartphone later this month. 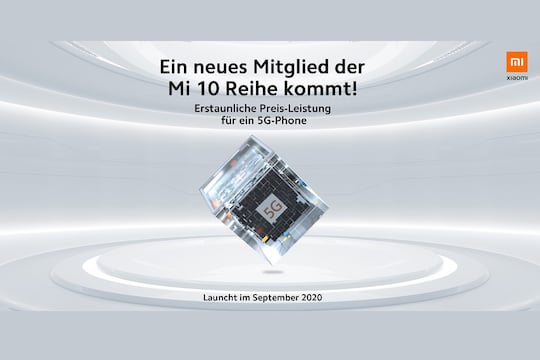 Teaser for the upcoming 5G budget mobile phone
Xiaomi The very successful Mi 10 Lite came onto the market in May, which offered a particularly affordable entry into the 5G world at an RRP of 349 euros. The smartphone is now available for less than 270 euros. A little brother of this cell phone is supposed to appear just below the 300 euro mark. Xiaomi names a price of 2XX euros, so in the worst case, 299 euros will be due. For this sum there is not the very fast chipset Qualcomm Snapdragon 765. The company points out that the as yet unnamed member of the Mi-10 line will be the first to receive a new Snapdragon 7-Series platform.

Xiaomi did not want to disclose more product details, we have a press release on the upcoming 5G entry-level model, but it does not contain any further information. In the teaser graphic of the Twitter post, Xiaomi only shows a transparent cube with a 5G label on a silver background. Unfortunately, there are no references to the design.

Xiaomi has smartphones for everyone

There are two main reasons why the Chinese manufacturer is also becoming more and more relevant in Germany. Often there is a better price-performance ratio compared to the top dogs like Samsung and Huawei, and the battery capacity is often larger than that of the competition. For example, the Xiaomi Redmi 9A, which currently costs less than 100 euros, has a large battery with 5000 mAh on board. The technology is also right, according to DxOMark, the flagship Xiaomi Mi 10 Ultra currently has the best smartphone camera. In addition, the Poco F2 Pro is a fast Snapdragon 865 model for less than 400 euros.