What is a nightmare

Nightmare: How They Are Made + What The Dreams Mean

Just on the run from a monster, but now in bed: Those who wake up from a nightmare are happy when they realize that it was just a dream. It usually only takes a few minutes before the negative feeling can finally be shaken off. On the other hand, if nightmares happen more often, they get to you: Sleep is no longer so restful, work is extremely difficult. How does a nightmare come about? What to do if bad dreams occur more often We explain what types of nightmares there are, what they mean and how to deal with them ... 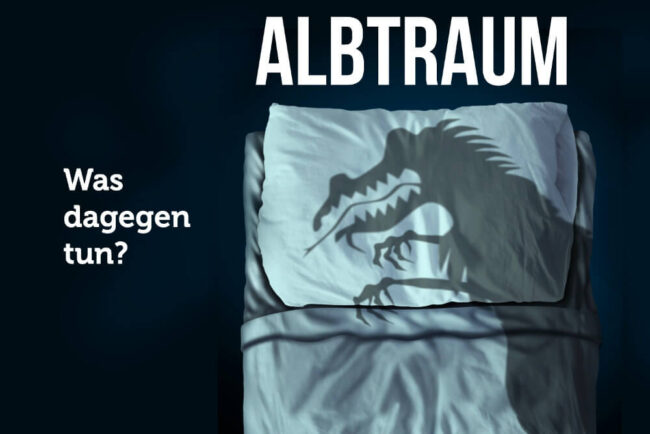 What is a nightmare

A bad dream is called a nightmare or an anxiety dream. The content arouses in the dreaming fears or negative feelings such as anger, sadness, feelings of guilt, disgust or shame. Nightmares can last a few minutes or up to half an hour. Then we wake up from sleep. Sometimes bathed in sweat with a pounding heart from the horror and tension that I have just lived through. Then again incredibly relieved that it was just a dream.

According to previous knowledge, nightmares mainly appear in the REM sleep phases in the second half. This sleep phase is characterized by rapid eye movements behind closed eyelids (REM = rapid eye movement). Sleep in this phase is easier, but at the same time it is a pronounced dream sleep phase that lasts longer and longer towards the end of the night. Anyone who wakes up from a nightmare from this phase can usually remember the specific content very well. On the other hand, if you wake up from a deep sleep phase, there is usually no memory.

Why do you say nightmare?

By the way: Whether you write a nightmare or a nightmare: According to the Duden, both spellings are correct. In addition: Due to the hardening of the final voice, nothing changes in the pronunciation. The term nightmare comes from Germanic mythology. Here the idea of ​​an alp or alb (plural: albums) existed. These are elves who were responsible for bad dreams. The term nightmare for bad dreams is derived from these beings.

Synonymous terms are nightmare / nightmare, Anxiety dream, incubus (especially in medicine) or nightmare. The term Nachtmahr is hardly used anymore. It shows a close connection to the English word for nightmare ("nightmare") and to the Dutch word ("nachtmerrie"). In the minds of the people this night meal sat on the sleeper's chest at night. This created a strong feeling of pressure.

A nightmare is known as a parasomnia. This is a form of sleep disorder, more precisely a disturbed sleep quality. Medicine and psychology distinguish between two types of nightmares:

The nightmare must be distinguished from pavor nocturnus (night terrors) and sleepwalking (somnambulism):

Pavor nocturnus
The dreaming awakens from deep sleep. This results in massive physical excitement, which is shown by the fact that the person concerned is bathed in sweat. The pupils are enlarged and the heart and breathing rates are significantly increased. In contrast to someone who wakes up from a nightmare, those affected by the Pavor nocturnus cannot or only weakly remember the contents.

Sleepwalking
During the deep sleep phase, the person leaves the bed and walks around. What sleepwalking has in common with the pavor nocturnus is that the respective person cannot or can hardly remember the content later. The person concerned is also completely disoriented if he does wake up during sleepwalking.

In a nightmare it is about in some form threatening situations for the dreaming or a person close to him. Children still often dream of monsters and of being hunted. According to the renowned sleep researcher Michael Schredl, the following items are among the most common of a nightmare:

As terrifying as these scenarios seem, the meaning of a nightmare does not always have to be obvious and relate to the specific situation. Nightmares can also have a completely different, less obvious meaning:

Free fall in a nightmare doesn't have to be an indication of a fear of heights. Rather, it could indicate fears about the future, professional worries and difficulties.

An escape in a nightmare usually stands for bad events that someone does not want to be confronted with. You symbolically run away from an argument. These can also be traumatic experiences from childhood that you suppress.

Your body is paralyzed, you simply cannot move and you have to stand by and watch - such paralysis is a common motive in nightmares. One possible meaning is the feeling of being dependent on other people and not being able to act independently.

Missing an appointment with a customer, arriving late for an exam or being late in any other way - many experience this during a nightmare. The fear of not being up to a challenge is assumed to be the meaning. Likewise, nightmares of being late can represent regrets about missed opportunities.

Anyone who dreams that a person dies can have concrete worries about his life. But there can also be a deeper meaning that suggests that a relationship dies because you move away from a person.

A little sleep deprivation here and there due to a nightmare has no health consequences. However, if the nightmares are chronic, act. That is, within three months, a nightmare will occur at least once a week. The possible consequences:

In addition, other health problems such as heart problems, obesity or mental illnesses such as depression can occur in the long term. The nightmare itself is less of a trigger and more of a symptom if it occurs chronically.

What is the reason for nightmares?

Having a nightmare from time to time is not uncommon and nothing to worry about. On the other hand, those who have frequent nightmares will ask themselves: "Why do I dream badly?" There can be no general answer to such questions, as the individual framework conditions have to be considered. A nightmare can be caused by any of the following:

What to do about nightmares

If nightmares occur frequently and are associated with great fear, there is a need for action. Both indicate that the psychological equilibrium is disturbed. The first step is a self-reflection about possible causes of the respective nightmare. Seriously ask yourself about triggers. Sometimes the contents of the dreams give clear signals, in other cases you need to think a little more carefully. Depending on the cause, there are different things you can do about nightmares:

Tips for a specific cause