Why do children rarely go outside anymore

Fact check: How great is the risk of corona infection outside?

How likely is it to contract the coronavirus outdoors?

The probability of being infected with the virus outdoors is significantly lower than in closed rooms - both with the original variant of the coronavirus and with the mutations. Leading aerosol researchers even say: "The transmission of SARS-CoV-2 viruses takes place almost without exception indoors. Transmission outdoors is extremely rare and never leads to 'cluster infections' (this means infections from several people at the same time, editor's note. ), as can be observed indoors, "write five leading members of the Society for Aerosol Research (GAeF) in an open letter to the German federal government and the prime ministers of the federal states.

The reasoning of the researchers: Aerosols lasted much longer in closed and especially in narrow spaces than in the fresh air. "Wearing a mask in the pedestrian zone and then having a coffee table without a mask in your own living room is not what we as experts understand by infection prevention," says the letter, which should be understood more as a contribution to the debate than anything else contained new data from study results.

At DW's request, the Robert Koch Institute (RKI), which as a federal authority also evaluates the sites of infection in Germany, did not want to comment on the researchers' letter. However, this debate is not only about the risk of infection outside in parks or pedestrian zones, but also about the ways to get there - for example by bus and train. In principle, however, the RKI also writes in its profile on the coronavirus: "Overall, transmissions in the outdoor area rarely occur. If the minimum distance is maintained, the probability of transmission in the outdoor area is very low due to the air movement."

Why is the risk of infection lower outside?

Aerosols, i.e. very small droplets in the air, play a crucial role in the transmission of the coronavirus. According to experts, these aerosols become harmless faster outside. "That has to do with the fact that the air circulation in the open air is much greater. There are wind drifts, which of course very quickly results in a dilution effect," explains Nico Mutters, head of the Institute for Hygiene and Public Health at the University Hospital Bonn DW.

Birgit Wehner, aerosol researcher at the Leibniz Institute for Tropospheric Research, also says that droplets that are exhaled dry out faster outside and then dilute more quickly. In an earlier position paper of the Society for Aerosol Research, which Wehner also signed, it says that, especially in large crowds with small distances, an infection cannot be ruled out, even outdoors.

So the rule of 1.50 to two meters distance must also be adhered to outdoors. "If you do not keep this distance and if you look at yourself face-to-face and talk, sing, scream, spit, then instead of airborne infections you can become infected with droplets, so to speak spit on," says the virologist Alexander Kekulé im DW interview. Kekulé is known in the media for his criticism of the government's measures - according to Kekulé, you have to deal with the virus without restricting your life too much.

According to the virologist, the usual distance rule also applies to the mutation. Kekulé emphasizes: "The mutants don't fly any further, that's very important to say." They are a bit more contagious, but that makes no difference to the countermeasures.

It is also better to avoid kisses or hugs. With normal movements - such as briefly walking past - there is virtually no danger in the open air.

Studies also confirm that the risk of being infected outdoors is very low. For example, a study from China says that of 7,324 reported infections, only one occurred outdoors. In Germany, the data recorded by the RKI on outbreaks (two infections and more) do not provide any reliable information about the difference between infections indoors and outdoors. Since it is by no means possible to find out all the infection sites, only rough findings can be derived, for example that most infections currently take place in private households in the professional environment as well as in kindergartens.

How does wind play a role in transmitting the virus?

"The windier it is, the more the aerosol cloud that is produced is naturally blown away," explains aerosol researcher and physicist Gerhard Scheuch.

Time and again, photos are shared in the social networks in which numerous groups are sitting in a meadow. But here, too, Birgit Wehner gives the all-clear: It is very unlikely that a strong wind could carry the aerosols so far that another group could become infected. As long as the minimum distance is maintained. Scheuch even considers this scenario to be "absolutely harmless". In an interview with DW he said: "The body heat alone creates a certain flow of air that usually goes up like a chimney." Because mostly the body temperature is about 37 degrees higher than the outside temperature. "Then the warmer air rises and then this aerosol cloud rises too."

An Iranian study also showed no evidence that COVID-19 is transmitted via wind.

Does it make a difference if it's warm or cold outside?

This question has not yet been conclusively answered scientifically. American researchers, for example, examined infections in warm, cold, dry and humid regions in China and found no connection between climatic conditions and the number of infections.

However, an Austrian study confirms that UV radiation destroys viruses. "However, UV radiation presumably only has a minor impact on direct infection from person to person," emphasize the researchers nonetheless, since infection can occur within minutes. 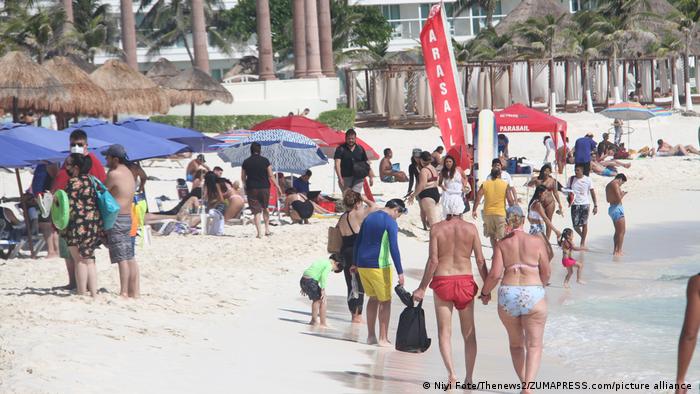 On a beach in Cancun (Mexico) in January, people romped about - sometimes without mouth and nose covers

The statements of the experts interviewed by DW also differ here. Nico Mutters says that one cannot generally say that there is less risk of infection outside in warm seasons than in cold ones. "So there is generally higher UV radiation in summer, but even higher values ​​are achieved through the reflection on the snow, for example when skiing. So you can see whether it is warm or cold, does not have a general effect on the probability of transmission", explains mother. In addition, there are many infections worldwide, regardless of whether in warm or cold regions.

The virologist Alexander Kekulé disagrees. The infections, even in warm countries, would not all happen outside, but inside. "Precisely because you are often inside there, with air conditioning and fans," says Kekulé.

Even when meeting athletes outdoors, according to experts, it is sufficient to keep the minimum distance - even if athletes inhale and exhale more deeply and release more particles in the process.

"If a jogger just walks past you for a moment, even at a short distance, the risk is very low," aerosol researcher Birgit Wehner told DW.

Gerhard Scheuch also confirms this. Even when doing sport, you need several minutes of standing together so that you can become infected. That's why he doesn't see any problem outdoors in contact sports such as soccer or basketball. "The problem arises when you use cubicles to change clothes or you have to use toilets. These are dangerous areas. You have to make sure that these areas are well ventilated," explains Scheuch. Otherwise, the measures can be loosened outside with the necessary distance, according to the aerosol researcher. 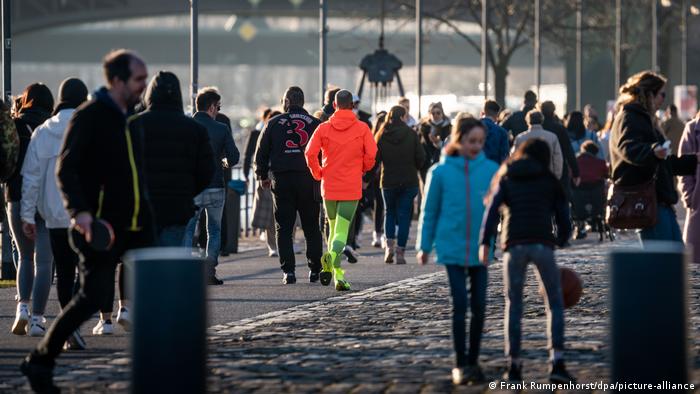 A Dutch study last year, on the other hand, said that you had to keep a lot more distance from athletes - cyclists should be kept at a distance of up to 20 meters. However, this study is controversial: It was made in a wind tunnel and not under real conditions.

Is it more dangerous to meet smokers than other people?

So far there are no studies that investigate passive smoking in connection with a greater risk of infection. Last year, however, the Spanish government made headlines by banning smoking in open public spaces. However, this only applied to the places where a distance of two meters could not be maintained.

According to the Robert Koch Institute, the only thing that is certain is that smokers have a higher risk of developing a serious disease course of COVID-19.

Does it make sense to wear a mask outside?

It makes sense to wear a face-to-face mask outdoors if the minimum distance cannot be maintained. Especially when people are closer together and you can't avoid being in large crowds.

Mutters says that if there is little distance at concerts, for example, masks would definitely make sense. Wehner also explains: "If you stand at a bus stop, stand in line and feel uncomfortable, then a mask is of course good."