Why would anyone try CBD

CBD, short for cannabidiol, is becoming increasingly popular. Pharmacies and health food stores sell products with the hemp component and there are already numerous CBD shops in the cities. There you rarely come across stoner clichés such as hemp leaves, smoking utensils or reggae music. Many retailers try to improve the image of the cannabis plant and advertise their products as trendy lifestyle items.

CBD is one of 60 cannabinoids in the hemp plant. The best known is probably tetrahydrocannabinol (THC), which is classified as a narcotic drug due to its psychotropic effects. Medicine, which only hesitantly paid more attention to CBD, focused on this for a long time. In the meantime, cannabidiol has become a trend as an over-the-counter flavor product.

The substance is often touted as relaxing and anti-inflammatory in internet forums and blogs. Pain therapist and orthopedic surgeon Martin Pinsger confirms the latter: “It is assumed that CBD works particularly well with inflammation. It can also be used for rare forms of epilepsy, anxiety disorders and chronic pain ”.

The physician regrets that the substance has hardly been researched compared to THC. However, the latest research showed that relatively high doses were necessary to have an effect. In terms of price, this could become a problem, as CBD drops are very expensive in the appropriate dosage.

Not a drug, not a dietary supplement

At the moment there is only one single hemp-based medicinal product, used in patients with multiple sclerosis, available in Austria. In addition, doctors can order THC in its pure form as a so-called magistral prescription. In this case, the drug is prepared individually in the pharmacy and is called dronabinol.

According to the Agency for Health and Food Safety (AGES), CBD itself is not approved as a drug in Austria because it is still being tested in clinical studies. 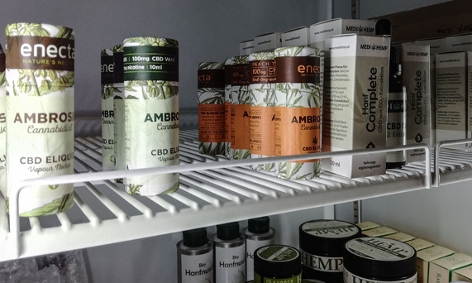 CBD comes in many forms

According to AGES, cannabidiol also does not meet the definition of a dietary supplement. That means the substance is not yet regulated by law. Therefore, in Austria, CBD may only be advertised and sold as a so-called aroma product. Dealers are not allowed to give recommendations for use or information on the effect and dosage and refer to books or doctors.

In online shops and CBD stores, cannabis flowers and leaves are available as tea blends with other herbs or pure. In order for the possession to be legal, the corresponding varieties must be listed in the Seed Act.

The cannabidiol can also be CO2-extracted and processed into oils, gels or sprays. Regardless of the form, cannabis products may not contain more than 0.3 percent of the psychoactive THC according to the Narcotics Act.

With cannabis flowers, the limit value can become a problem, as Daniel Lichtenegger, head of the office for combating addictive substance crime at the Federal Criminal Police Office, explains: "You cannot tell by looking or smelling whether it now contains 0.29 percent THC or 0.31 percent" .

Anyone who comes under police control with CBD flowers will therefore initially be treated like someone who has illegal cannabis with them. Daniel Lichtenegger warns that you cannot talk yourself out of the original packaging, a receipt or an expert opinion that is supposed to certify the THC content of the flowers.

On suspicion of a violation of the Addictive Substances Act, a police officer could then secure the flowers and interrogate the person concerned. The flowers would then be sent in for investigation and the case might end up with the public prosecutor's office.

CBD products that are permitted under the Addictive Substances Act also contain smaller amounts of the prohibited THC. Regular cannabidiol consumption can therefore lead to increased THC levels in the blood.

In response to a request from help.ORF.at, attorney Martin Feigl points out that there is no limit value for THC in the blood in Austria, i.e. zero tolerance applies. In the event of a traffic control with a blood test, the driver's license could therefore be withdrawn.

Sales ban in the government program

In July, the Ministry of Health was commissioned by the National Council to submit a report on the medicinal use of the cannabis plant by the end of the year.

The sale of cannabis plants could soon be banned in Austria

In the government program, cannabis can only be found under the Addictive Substances Act. In addition to tightening individual provisions, there is also a "ban on the sale of hemp seeds and hemp plants". Should this be implemented, the CBD stores could be gone as quickly as they came.