What is the Kumbh Mela?
The Kumbh Mela is a pilgrimage festival with a special rhythm. Four cities participate in the rotation system in the organization of the same, there are 5 different types, the festivals take place in a 3-year, 6-year, 12-year or 144-year rhythm. The actual rites are rather unspectacular. The implementation of this festival consists mainly of ritual baths in holy waters, particularly concentrated on certain days that are regarded as particularly auspicious. After that, respect is shown to the holy men, the swamis (ascetics) and the gurus (teachers). What makes the Kumbh Mela special is the incredible number of pilgrims. Smaller Kumbh Melas attract 2-3 million pilgrims, really big ones like the 2001 AD in Allahabad easily 75 million! Above all, the Kumbh Melas are a feast for the eyes, as the proportion of sadhus (ascetics) and other picturesque figures is very high:

A Kumbh Mela is a meeting place for swamis and sadhus, philosophers, ascetics and beggars and above all for onlookers who seek darshan, to meet the saints, to see them and to touch them.

The Kumbh Mela is an ancient ritual. The oldest mention goes back to the 7th century AD. She has served the religious association of India for at least 1300 years.

Mythological background:
The legend behind it is as follows: Once upon a time, Asuras (demons) and Devas (gods) fought each other. Indra temporarily lost his power while the demon Bali rose. This was done by a curse with which Durwas Rishi placed the god Indra because he was annoyed that Indra did not accept a gift from him. And not only Indra, but also the other gods lost power. On the advice of Vishnu, Indra had to get the nectar Amrita (drink of immortality) in order to regain his old position and regain his power. But the gods were too weak to do it alone. Actually, gods and demons should and wanted to work together to obtain this nectar. Demons (Asuras) are indeed the arch enemies of the gods, but against the promise to get a portion of Amrita, they agreed to help. Together they whisked the ocean of milk (Samudra Manthana) in order to gain the divine nectar. Dhan Vantari rose from the sea, holding a vessel (kumbha) in his hands, which was filled with nectar. However, the Asuras did not stick to the agreement and wanted the nectar for themselves. Demons and gods then quarreled over possession of the vessel until Garuda, Vishnu's mount, flew away with the divine potion. Four drops of the precious content fell on those four cities in which the festival is celebrated. For 12 days demons and gods quarreled over the possession of the Amrita. The gods stayed on Mrutylok (earth) for 12 days. 12 days of the gods correspond to 12 human years, so it comes to the 12 rhythm. According to another version, a bird (crow) snatched the drink from the demons and flew away with it, resting in the four places. It takes him 12 days to get from the milk ocean to heaven.

Kumbh Mela locations:
Held four times in 12 years, i.e. every three years, rotating in one of the four holy cities, consequently every 12 years in the same city:

Of all places, Allahabad is considered to be specially chosen and sacred. 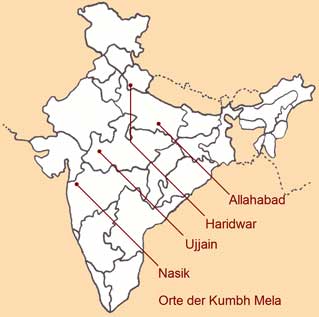 To name the individual Kumbh Melas:

Kumbh Mela - a clock of the universe:
The exact time of the respective Kumbh Mela depends on the position of the sun and Jupiter or their entry into a certain rasis; the favorable bathing days in addition to the moon. In times without precise clocks, the sky was the clock - due to the constellation of planets and other celestial bodies, one knew exactly when to go to which place on the pilgrimage. For the astrological constellations, I refer to the information provided by Dr. N. Rathnasree, Director of the Nehru Planetariums in New Delhi.

Every 144 years the conjunction is perfect, which gives rise to the greatest mela ever.

Because Jupiter plays an important role in determining the dates, the 12-year cycle comes about, because its orbit around the sun (Jupiter year) is 11,862 years (sidereal period).

Dates for the Kumbh Mela:

To explain the technical terms:
Amrita: divine nectar, drink of immortality
Amrita Kumbh: vessel filled with amrita
Ardha: half
Darshan: the encounter with the saints. It is blessing to see or touch a holy man.
Guru: Jupiter
Kumbh, Kumbha: vessel
Magh: a month in the Hindu lunar calendar
Maha: Great
Mela: gathering for the feast
Purna: Completely, entirely
Rasi = part of the ecliptic. The earth's orbit around the sun is divided into 12 rasis, each rasi covers 30 degrees. Corresponds to a zodiac sign. The name of the Rasis is: Mesha (Aries), Vrisha (Taurus), Mithuna (Gemini), Karkata (Cancer), Simha (Leo), Kanya (Virgo), Tula (Libra), Vrischika (Scorpio), Dhanus (Sagittarius) , Makara (Capricorn), Kumbha (Aquarius), Mina (Pisces). A rasi coincides with the solar months and overlaps with the lunar months.
Rishi: Wise men from Vedic times
Samakranti, Sankranti, Samkranti = first entry of the sun into a rasi. So there are 12 Samkranti in a year. A samkranti can theoretically occur at any time of the day or night.
Samudra Manthana: The whisking of the ocean of milk
Sangam: confluence
Sidereal year: time between two successive passages of a celestial body (planets, sun) in relation to the fixed stars
Simhastha: derived from Simha Rasi, i.e. an event that takes place at the point in time when celestial bodies enter Simha Rasi (Leo)