Nobody wants statues and busts of Chiang Kai-shek anymore. Now they are supposed to attract tourists to a park. Sino-Taiwanese rapprochement in times of crisis. 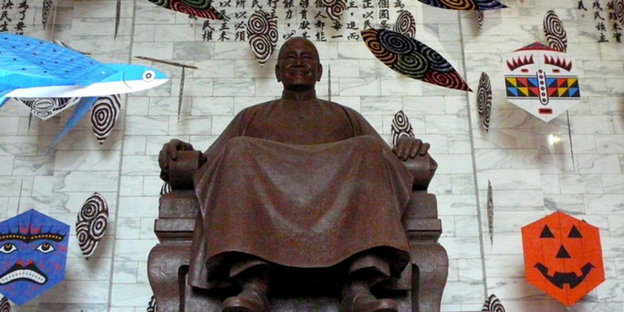 Statues of Chiang Kai-shek are said to find their final resting place in a theme park. Image: dpa

A dictator is disposed of. Seventy kilometers south of the capital Taipei, in the middle of the tropical hills of Taiwan, Generalissimo Chiang Kai-shek finds his final resting place in a bizarre sculpture park. The former ruler smiles at the visitors one hundred and forty-one times in stone and bronze, sometimes larger than life in uniform on horseback, sometimes in civilian clothes on a stately armchair. A little further on, Chiangs are grouped with hats, books or walking sticks in hand on the accurately mowed lawn. Along the way: busts like cloned heads.

The sculptures tell of the transience of power - and the astonishing changes that Taiwan, with its 23 million inhabitants, is currently experiencing. When Chiang ruled the island with his military from 1949 to 1975, he dreamed of retaking mainland China, which he had lost to Mao Zedong in the civil war. His hatred of the communists was great: anyone he suspected of sympathizing with them was imprisoned.

Today, his successor, Ma Ying-jeou, who took office almost a year ago, seeks to come to terms with the Chinese Communist Party. Otherwise the island could not survive economically and politically against the overwhelming power of the People's Republic with its 1.3 billion people, he says.

At the same time, the Taiwanese are trying to come to terms with their own past - often in a very pragmatic way: the statues in the park on Cihusee originally come from all parts of the island. Schools, libraries and other institutions wanted to get rid of them because Chiang had ruled with an iron fist.

The enterprising government of Taoyuan County saw this as an opportunity - and created the sculpture cemetery next to Chiang's mausoleum as a new tourist attraction. It is reminiscent of Moscow's Gorki Park, where the Russians have erected many monuments to Lenin, Stalin and Brezhnev since the end of the Soviet era. Meanwhile, more and more visitors from the People's Republic are mingling between the tourists who photograph themselves in front of the Chiang statues. The mainlanders have been allowed to come to the island with tour groups since last year. If you want to travel back and forth, you no longer need to postpone time-consuming stopovers in Hong Kong or Macau, as was previously required. Tourism is set to revive Taiwan's crisis-ridden economy.

Just a few days ago, Beijing and Taipei decided to increase the number of direct flights a week from 180 to 270. Banks will also be allowed to cooperate in the future. This is supposed to make the work of the many Taiwanese companies that have invested billions in the People's Republic in the past few years - despite warnings from then President Chen Shui-bian, who feared that China would be too economically dependent on China. Now the authorities should be able to better protect investors. For the first time, the judiciary on both sides will work together. In the face of global fear of a catastrophic flu epidemic, which has grown with the H1N1 virus outbreak in Mexico, Beijing has given up its opposition to Taiwan being represented in the World Health Assembly (WHA). However, the Taiwanese are only allowed to attend as "observers" under the name Chinese Taipei, and the permit must be renewed every year. But for Taiwan Mainland Affairs Director Lai Schin-yuan, it is an "important first step".

At the sculpture cemetery next to the Chiang mausoleum, another remarkable sight awaits the tourists: For the first time in a few days, the secret command center, from which the generalissimo planned the reconquest of China in the sixties, can be visited.

Most popular in the souvenir shop are cartoons of the dictator and his son and political heir Chiang Ching-kuo, who abolished Taiwan's military law in the 1980s. "I'm overwhelmed and speechless," says a mainland tourist. At school he once learned that Chiang was a "traitor" and "enemy" of the fatherland. Maybe he'll buy a Chiang T-shirt now.