The natural distribution area of ​​the spruce consists of three sub-areas. In Germany, the large, natural occurrence is only in the Alps. In the Harz, Bavarian Forest or Black Forest there are just isolated natural occurrences. Their current share in German forests is around 26%.

The so-called needles are about 1 to 2.5 cm long and about 2 mm wide. They are very pointed, angular, often curved saber-shaped and sit individually on small brown leaf cushions (the needles of fir / yew / Douglas fir are green throughout). The needles are dark green and show weak white lines (stomata lines) on both sides. The lifespan of the needles is usually 6 years.

With regard to the formation of the crown, different shapes have developed depending on the geographical location, e.g. Combed spruce: broad crown, fast-growing (at risk of snow breakage, i.e. in areas with little snow) - Slab spruce: narrow crown, many horizontal branches, dense needles, short needles (hardly any risk of wind breakage or snow breakage, High mountains and northern distribution zone).

In the stand, the spruce becomes manageable at around 50 to 60 years of age, in the free state at 30 to 50 years. The flowering time is in April / May. The flowers are unisexual and monoecious; they are located on the previous year's shoots in the upper treetop area. The male flowers are up to 25 cm long, red-yellow catkins that sit upright on the branches. The female flowers are in initially upright, purple-red, 2 to 4 cm long cones that slope downwards after fertilization.

The cones ripen in October / November, are brown, cylindrical, about 10 to 16 cm long and when opened, about 3 to 5 cm wide. They hang from the tree). The cone scales have smooth edges, only on the upper edge they are usually toothed. In late winter or spring, the cones open and the seeds fall out. After that, the cones fall off. The cones are an important food source for various small mammals (squirrels, mice) and birds (crossbills).

The bark is initially smooth and reddish-brown (hence the name red fir), but with increasing age it becomes gray-brown with rounded scales that bend up at the edge.

Root system:
On well-ventilated soils, the spruce forms a stable sinker root system, which can penetrate up to 2 m deep into the soil. On damp or wet soils (poor ventilation) it takes root only 20 to 30 cm deep and develops the so-called plate root. This root system gives the tree very little support, so that the spruce in these locations is very much at risk of wind throws. This is why the spruce is also known as a shallow root.

The spruce only makes high demands with regard to the water supply. At the same time, the floors must remain well ventilated. The site surveyor describes these soils as fresh to moderately fresh, i.e. a good to sufficient water supply is guaranteed all year round (with the exception of the very hot summer months). In terms of nutrient requirements, the spruce is rather undemanding.
In terms of climate, the spruce prefers winter-cold continental and mountain climates. Dry soils are avoided. The spruce does not get a dry and warm climate either.

The spruce is one of the most important tree species for forestry; It is not for nothing that it is also called the bread tree. As a shade-bearing tree species, it can be mixed well with other species. Pure cultures are only rarely planted today because they are too susceptible to biotic (bark beetle) and abiotic factors (storm). The very poorly decomposable litter, which increases soil acidification, and the promotion of poor humus forms (raw humus) also speak against pure cultures. Another argument against spruce at many locations is climate change. Due to the high demands on the water supply, the impending dry summers will keep coming into "drought stress". This leads to a reduction in vitality, so that it becomes more susceptible to pests and its growth performance declines.
Common mixed tree species are e.g. beech, sycamore, fir. The age of use of the spruce is approx. 100 years with a BHD (chest height diameter)> 45 cm.

The wood of the spruce is very light, whitish, without discoloration, light, soft, resin-rich and stable. It is only weather-resistant to a very limited extent and therefore unsuitable for outdoor use. It is easy to work with and is used as lumber, as beams and battens for roofs, windows, for paneling, floors and fences. Toys, furniture and packaging materials are also made from it. In addition, spruce wood is an important product for paper production. In the high mountains, some spruce trees have irregularities in the grain of the wood, the so-called wimmer growth. This wood is very popular for the construction of musical instruments.

The beech as a climax tree replaced the oak in many places after the climate had improved in favor of the beech (~ 3000 BC). In the past it was far more important than it is now; it was the main supplier of firewood and also served for cattle fattening in the Mittelwald (old form of management of the forests). Beech wood was also used to produce charcoal and potash for making glass. How great the importance of the beech once was in the population can be measured, for example, from the fact that around 1500 place names can still be traced back to the beech. The word letter is also derived from the name beech, because in earlier times sticks were thrown from beech wood and characters were read from them (runes). 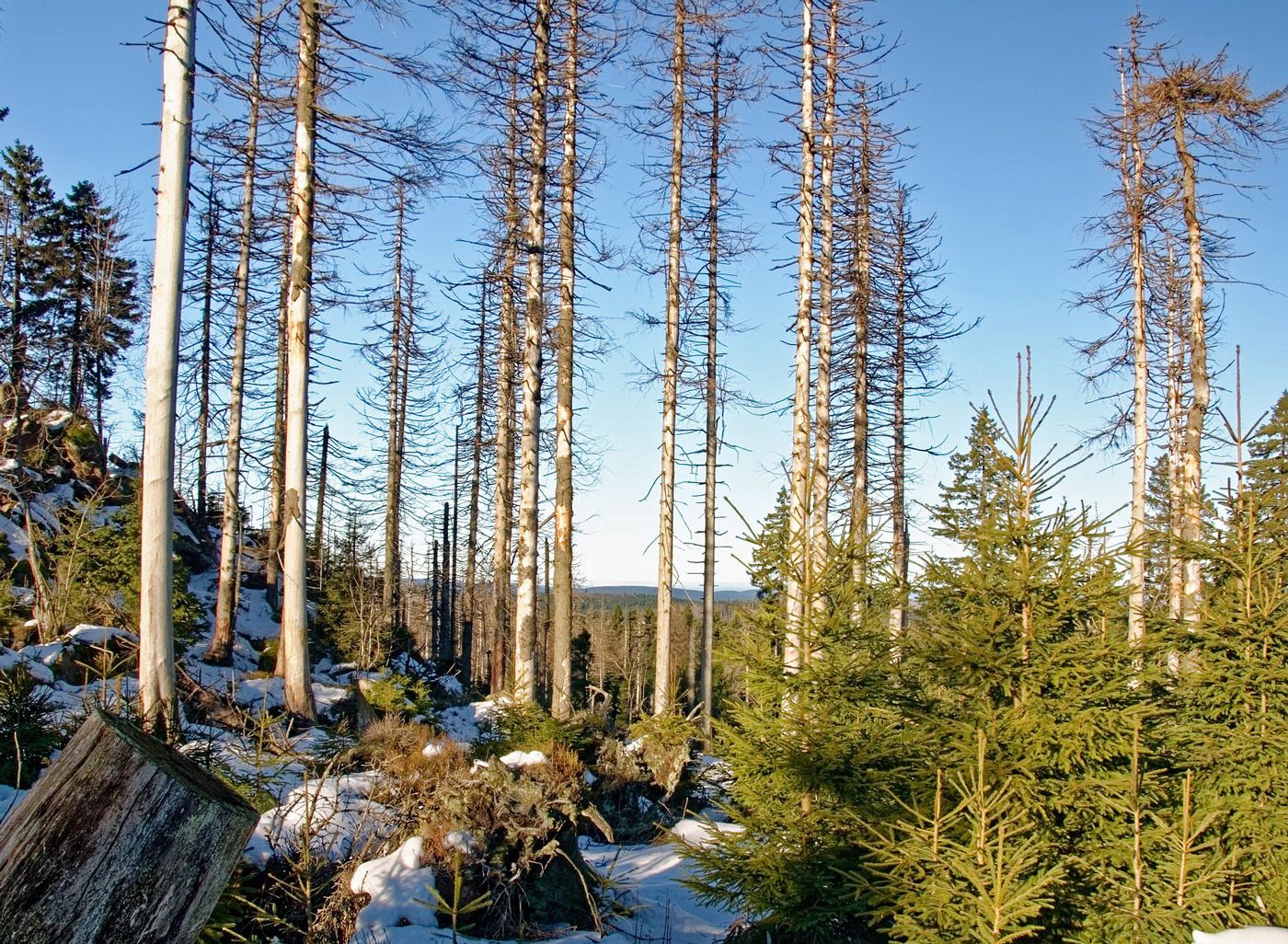 The bark beetle is the bark beetle's greatest enemy - it is often said. This is not quite the case! In the natural range of the spruce, the growing season is very short. Spring begins in April / May and autumn in September. The climate there is humid and cool. These are not good prerequisites for a mass reproduction of the bark beetles (book printers and engravers). Vital spruce trees defend themselves against an attack by “resinifying” the beetle. The weakened die, but there are usually never large areas of baldness. It is different in dry, warm regions, where the spruce does not occur naturally. The bark beetle can cause enormous damage here.