How is a swamp created 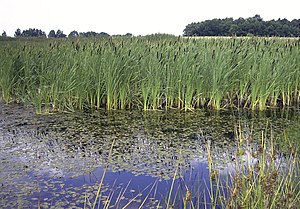 The marsh cob is a typical marsh plant. He is often called the cannon cleaner because there is a brown thickening on the top of the stems. The whole vegetation is called "reed bed".

A swamp is a piece of wet land. There are swamps on banks or in flat river areas. The ground is muddy. If you drain a swamp, you will be left with fertile soil. You can very easily create a field on it.

A bog is not the same as a swamp. When you drain a bog, peat is left over. It used to be used as fuel, today it is often added to the garden soil or used in flower pots. However, it is difficult to say what exactly is a swamp and what a bog is.

There are no trees growing in the swamp, but there are occasional meadows or bushes. Many special plants also grow in the swamp that cannot be found anywhere else. The best known is probably the reed. There are also very beautiful flowers such as the swamp iris, the swamp cranesbill and many others.

Many animals also live in the swamp, for example dragonflies and many other insects. The pond turtle also lives in Europe. In contrast, there are crocodiles and alligators only on other continents.

In many countries, most of the swamps have been drained. People wanted to gain land for agriculture or to build roads, airports and cities. Today some people regret that and try to protect the other swamp areas. Bio-diversity, i.e. the wealth of different and special plants and animals, is important for the entire planet earth and people.