Did privatization help Nigeria or did it fail?

On March 28, 2015, presidential elections were held in Africa's most populous country. In February the elections had been canceled because of the danger posed by the terrorist group Boko Haram. According to André Rönne, Head of the Delegation of German Business in Lagos, Nigeria, the election results mean a turning point in many respects.

(Guest article) For one thing, for the first time in Nigeria's history since independence, an incumbent president has been voted out of office. The "People’s Democratic Party" (PDP), which has been in power since the re-establishment of democracy in 1999, has suffered a noticeable loss of power and significance. Also for the first time, a regional and cross-ethnic alliance of northern Nigerian Muslims and Christians, especially from southwestern Nigeria, helped a candidate to win. This was unthinkable in 2011, when Goodluck Jonathan won the election with around 10 million votes ahead of General Buhari, his current successor in office. The fact that, apart from a few local riots, there has not yet been any noteworthy violence is certainly progressive for a country in which in the past there have been hundreds of deaths, especially after elections.

On the other hand, the election of Muhammadu Buhari, a former military dictator, provides an insightful view of the turmoil in Africa's most populous country. Buhari, now democratically elected for the fifth time, first put himself to power in 1983, only to be overthrown by his own soldiers only 20 months later. He introduced a deeply dubious style of politics 30 years ago. His regime stood for human rights violations through arbitrary detention, torture and, in some cases, executions of around 500 intellectuals, political opponents and journalists critical of the government. His fight against corruption and “indiscipline” among the population was characterized by public punishments against officials who misappropriated funds or who were late for work. 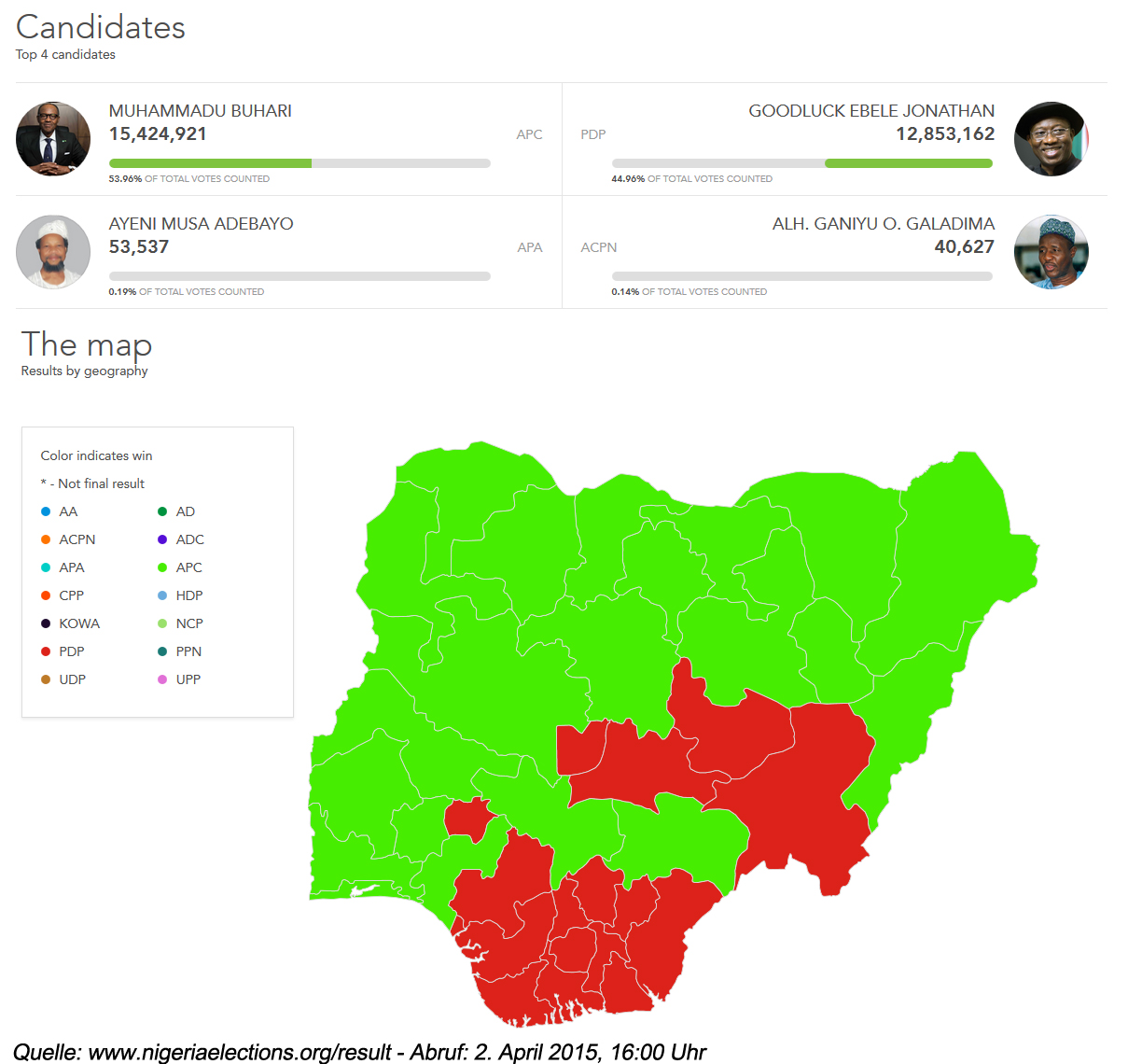 Buhari's reputation as a man who briefly but severely and incorruptibly ruled Nigeria is certainly one of the reasons for his election victory. The government's inaction against the Islamist terrorist group Boko Haram, another. The sect, which now controls almost the entire north-east of the country, has become a regional threat in West Africa through interventions in the neighboring countries of Niger, Chad and Cameroon. The reason given by predecessor Jonathan to postpone the elections for six weeks in order to defeat Boko Haram was unbelievable to most Nigerians. The sect has been operating safely in the north of the country for years and has killed around 15,000 people.

As a northern Nigerian Muslim, General Buhari is more likely to get this problem under control than the Christian Jonathan from southern Nigeria. The pacification of the Niger Delta, the oil-rich region of the country, can be seen as almost the only success in his tenure. Since Jonathan issued an extensive amnesty for former rebels, they have laid down their weapons, kidnappings and acts of sabotage have decreased. But this is mainly because the then president himself comes from the region.

Despite the relatively transparent and peaceful elections, foreign companies and investors now fear that Buhari, as president, could take a political course that he failed to take in the 1980s: the nationalization of key sectors of the economy such as the oil and gas sector, but also growing industries such as construction or food processing. Goodluck Jonathan has driven Nigeria's unbroken economic growth by privatizing key industries such as the energy sector. For many voters, however, security in the country was more important.

During the election campaign, Buhari painted a picture of himself as a refined democrat who has learned from his own mistakes in the past. It remains questionable whether he will be able to successfully fight the rampant corruption and Boko Haram.

The author of the article is André Rönne, head of the delegation of German business in Nigeria belonging to the network of German Chambers of Commerce Abroad (AHK). The country expert has lived for many years in the West African country, which has been considered the strongest economy south of the Sahara since 2012. Email: [email protected]; Internet: www.nigeria.ahk.de.

This entry was posted in General, Markets and tagged Nigeria by Stefan Enders. Permanent link to the entry.
<?