How can people read your mind

Mind reading is possible. It's just a question of how many electrodes you attach to the brain, says neurobiologist Nils Birbaumer. 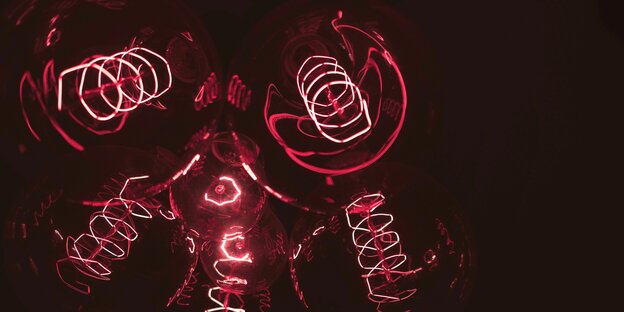 For a light to come on, it needs electrical impulses Photo: unsplash / Scott Webb

taz on the weekend: Mr. Birbaumer, can you read minds?

Niels Birbaumer: No, unfortunately not. I wish I could. At the moment we can only find out the answers to simple questions from the brain. And we can make completely paralyzed people use their brains to select letters and use them to form sentences.

What actually happens in the brain when we think?

It's pretty complicated. But what happens in the end is what the ancient Greeks recognized: Associative connections are made between the various cells in the brain. For example, if you stand in front of a wall and you see a trunk that extends over the wall, then you immediately associate the trunk with an elephant, because no one else has a trunk. The view of the trunk automatically triggers the image of the entire elephant in the brain. Or when you say: “I am walking”, then excitation arises in the areas of the brain in which walking is controlled. The associative network is called, this is how the brain and all thinking work.

And how can you measure that?

In principle, thinking is always electric. The moment we think, energy is consumed by the cells firing. A few seconds later, blood, especially sugar and oxygen, flows into these cells. This nutrient restores the balance. The blood flow can be measured on the surface of the skull using near infrared spectroscopy (NIRS) or magnetic resonance imaging (MRI). With electroencephalography (EEG) you measure the electrical activity of many millions of nerve cells at the same time, but you cannot say exactly which cells the activity comes from. But if you measure the thought in the individual cells yourself, which is much more accurate, you can only do it electrically or magnetically.

73, is Professor of Medical Psychology and Behavioral Neurobiology at the University of Tübingen and also Senior Researcher at the Wyss Center for Bio and Neuroengeneering in Geneva.

So thinking is really sport?

Naturally! Just without movement, it is movement at a standstill, so to speak. The brain consumes 30 percent of energy when you are not even particularly active. For example, if you learn a new language, the energy consumption will increase significantly. The brain is the organ in the body that, given its small size, uses the most energy in relative terms.

You are the first scientist who has managed to come into contact with "locked-in syndrome" patients - people who are completely paralyzed due to a stroke or the nerve disease ALS and can no longer communicate while their brains are following works like before. How do you do that?

Some take decades to become completely paralyzed, but Stephen Hawking wasn't even at the end of his life. For people who can still move their eyes, there are so-called eye trackers for communication. This allows you to select letters and words from a computer menu with eye movements and communicate with them almost as quickly as we healthy people do. The problem we have dealt with arises when the eyes no longer work, or so badly that the eye trackers no longer respond. In addition, trapped patients are often so tired with their eyes after just a few minutes that they can no longer do it. Then they can only communicate with the brain, because they no longer have any other muscle with which they can send a message to the environment.

And how do you communicate with the help of your brain?

In special cases we have to open the top of the skull - if the patient or their relatives want that - and then we stick electrodes into the brain. In this way we can register the responses from the cells directly. Of course you get the best answer, but you can't do that with everyone. It is very risky for older, very sick people. Otherwise we are dependent on whatever electricity or blood flow comes out of the skull surface anyway. At the moment you can only measure that with the EEG or near-infrared spectroscopy, i.e. the blood flow in the brain, or with the magnetic resonance tomograph, but it is far too big and too expensive to transport to the patient.

Suppose the patient has a chip implanted in the brain like this. How does this work?

The patient sees or hears certain letters. For example, first "E", because it occurs most frequently in German, then "B" and so on. And if the right letter comes, then he thinks something. He can think, for example: “Now I want to”, or he imagines something, for example a gesture, others simply say to themselves: “Click”, as if they were using a computer mouse in their minds, and then the cells in which there were themselves fire the electrodes are in place. And that's what we use to select the letter.

So each patient comes up with their own code word so that the computer starts up?

Everyone has their own way of doing things. If you think “yes” or “now”, then you do it very differently than me. In a completely different place, with different cells. But we have at least a hundred electrodes, and we can always find a few cells that respond. And when a correct word is formed, you also know that the answer from the brain was correct.

Do you have to imagine that letters are read to patients day and night? That would be terrible.

No, there is an order that they want to communicate now. And just like your iPhone, the computer learns. So after a while, after two letters, he will know which word you mean.

This text comes from the taz on the weekend. Always from Saturday at the kiosk, in the eKiosk or with a practical weekend subscription. And on Facebook and Twitter.

An article about your work with locked-in patients states that when the patient thinks “no”, the oxygen levels in the brain decrease. If he thinks of “yes”, on the other hand, the brain is better supplied with blood.

Most do, but not all.

Does that mean saying yes is more exhausting than saying no?

No. But I could imagine that an affirmative statement has a much stronger associative setting. "Yes" is usually associated with a lot more things than "No", and then of course more brain cells are activated, which leads to increased blood flow and this in turn to an increased need for oxygen. On the other hand, we also have patients for whom it is exactly the opposite. If you answer “No”, they have increased blood flow. And with one it's in the front left side of the brain, with the other in the right. It is very different from person to person.

If thinking is so individual, mind reading that works for everyone is actually unthinkable.

No not at all. It's just a matter of the number of electrodes you place in the brain. And the number of answers you want to filter out of the brain. If you expand the yes and no, you simply need more derivations. And of course you can in principle read minds when you have a million electrodes, as Mr. Elon Musk is trying to do now. So do we, but with a lot less money. Then you could read whole words in the language region. But we haven't gotten past 100 so far.

Facebook has been working on converting thoughts into writing since spring 2017, scientists have been trying to read dreams for years, andElon Musk wants to read minds with his company Neuralink. Is that possible?

What Mr. Musk wants is already conceivable. They want electrodes or electrode-like substances to be absorbed with the food, which then settle in the brain and, so to speak, send their messages outwards from the blood vessels or cells - if they can be supplied with energy. For example, when the cell fires and when it doesn't. We don't need to know anything more. Just when a cell fires and how it relates to other cells in the area. You can then read the essential things out of it. At the moment, however, this is purely futuristic, and in no democratic country can he get a permit.

You can't actually think anything either?

Well, I wrote a whole book about it with my friend Zittlau (“Thinking is Overrated”) that tries to answer your question. But I don't get any real result either. We have just listed different situations in which the thinking apparatus is relatively silent. The front part of the brain, which essentially controls thinking, i.e. conscious thinking, when it is separated from the rear, from the perceiving part of the brain, then it seems that at least the number of thoughts decreases. This has been known for a long time in cultural and historical contexts. That is exactly what the East Asian meditation techniques do, they also want to get into a thought-free state.

But apparently it only works to a limited extent.

Some of the nerve cells in the brain are always active, whether you are asleep, awake or unconscious. A part is silent all your life and is only activated in certain emergency situations. It is always only a relative less or a relative more. But it is only in brain death that one can say that thoughts are no longer running.