What skill saves your job from robots

Machine with self-knowledge: Researchers have constructed a robot that develops an image of itself without prior knowledge. He learns independently what shape he has and how he can move - similar to a newborn child. This ability to self-knowledge enables robots to adapt more flexibly to new tasks, but also to damage. At the same time, this could be a first step towards a real self-confidence of the machines, according to the researchers in the specialist magazine "Science Robotics".

Robots are almost ubiquitous today: They work in factories and warehouses, vacuuming dust for us or mowing the lawn and flying through the air as autonomous drones. Robots also do their job in the military, for rescue missions or when exploring foreign planets. In the future, the machine helpers will also work even more closely with people, for example as caregivers or household assistants for the elderly and the sick.

So far, however, most robots have had one problem: They are not self-aware. They do not develop their own image of themselves, their abilities and their “body”. “With the recent advances in machine learning, robots are getting better at understanding their environment,” say Hod Lipson and Robert Kwiatkowski of Columbia University. But the robots' self-image is usually only based on the models that have been programmed into them beforehand.

“But if we want robots to become more independent and adapt to situations that were not foreseen by their creators, then they have to learn to simulate themselves,” explains Lipson. An infant gradually gets to know and control its own body by fidgeting - and robots must also learn to build up a self-image through self-awareness.

“The crucial question is therefore: Can a robot generate a model of itself without prior knowledge?” Says Lipson.

From fidgeting to self-image

This is exactly what the researchers have now tested. For their experiment, they constructed a robotic arm with four degrees of freedom of movement. At the beginning, he had no prior knowledge of his appearance - he neither knew what shape nor what size it was. “Initially, the robot moved around randomly, recording action-reaction pairs for around 1,000 trajectories,” the scientists explain. Actions correspond to the motor commands, reactions to the respective end position of the arm. 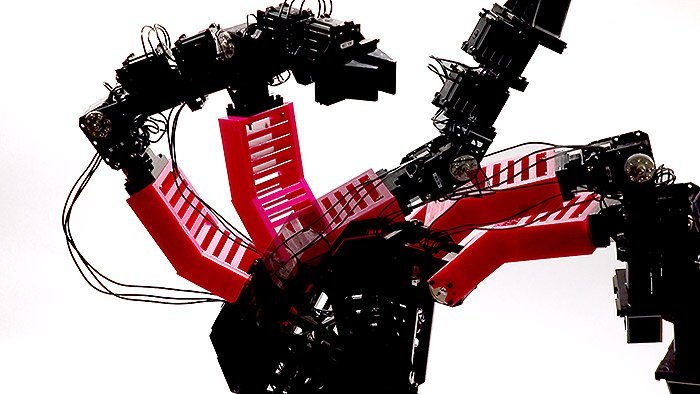 Only through its movements does the robotic arm develop a model of its shape and its movement capabilities. © Robert Kwiatkowski / Columbia Engineering

Now the decisive thing followed: with the help of an algorithm capable of deep learning, the robot evaluated these movements - and gradually created a model of itself. At first, this model was incomplete and imprecise, as the researchers report. For example, there was no idea of ​​how the individual joints were connected to one another.

But after just under 35 hours of training, the robotic arm had developed a relatively precise self-image. The scientists tested whether this would help him cope with new tasks with two tasks: In the first, the robot arm was supposed to pick up nine small balls and put them back in another place. In the second exercise, he was asked to pick up a pen and write with it. The challenge here: the robot had to do this solely on the basis of its own knowledge, without additional feedback from its sensors.

"It's similar to having to grab a glass of water with closed eyes and lift it - it's difficult even for us humans," says Kwiatkowski. But despite this handicap, the robotic arm was successful in 44 percent of the attempts. If he was also allowed to use current sensor data, he achieved 100 percent. “This proves that robots can successfully learn and plan on the basis of self-developed self-models,” say the researchers.

But now the endurance test followed: the scientists built a longer, deformed component into the robot, so that the arm was now more or less “crippled”. Would he adjust his self-image accordingly? “The robot automatically detected the change and adapted its self-model to it,” report the researchers. "As a result, he was able to continue to successfully cope with his tasks without major compromises."

First step towards a machine self-confidence

According to the researchers, this adaptability could make a decisive contribution to robotics and artificial intelligence. “The self-modeling of our robots is still very rudimentary compared to that of humans,” says Lipson. "But we believe that this ability could pave the way to a real self-confidence of the machines."

Such self-confidence could make robots and AI systems much more robust and adaptable. “But it also entails a loss of control,” emphasize the researchers. Because this makes robots even more independent of human programming - and thus also more unpredictable. (Science Robotics, 2019; doi: 10.1126 / scirobotics.aau9354)