India should be careful with China

China and India in the Maldives crisis

The political crisis in the Maldives puts India's neighbor in a difficult position. "The declaration of a state of emergency in the Maldives after the government refused to obey the unanimous decision of the Constitutional Court on February 1 worries the Indian government, as does the abolition of the constitutional rights of the people of the Maldives," a statement said of the Indian Ministry of Foreign Affairs. The arrests of constitutional judges and politicians are also a matter of concern. "The government is closely monitoring the situation," the statement said.

The political chaos in the Maldives began last week when the Constitutional Court ordered the release of all political prisoners and the annulment of the sentences passed against former President Mohamed Nasheed and other exiled opposition politicians. The judges also ordered that twelve MPs who had lost their seats after resigning from President Abdulla Yameen's ruling party may return to parliament. This would give the opposition a parliamentary majority and initiate impeachment proceedings against Yameen. This reacted by closing parliament and declaring a state of emergency on Monday. In a televised address, Yameen accused the judges of being part of a conspiracy to overthrow him. The state of emergency is "the only way to investigate against these judges and determine how far the coup preparations had progressed." 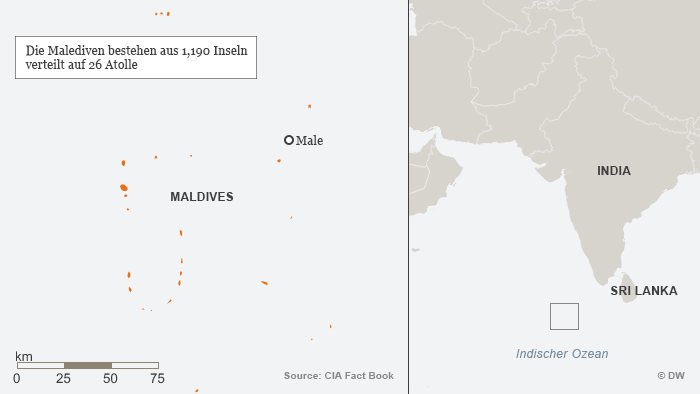 The opposition leader and ex-President Mohamed Nasheed, who lives in exile in Sri Lanka, has meanwhile called on India to intervene: "We would like India to send an envoy with military support to release the judges and political prisoners, including former President Maumoon Abdul Gayoom, and that they will be left home. We demand a physical presence (India), "Nasheed said in a statement. He won the island nation's first multi-party elections in 2008, but had to resign in 2012 after a police revolt. In 2015 he was convicted and imprisoned on charges of terrorism - widely regarded as politically motivated.

As a leading South Asian power, India has maintained close relations with the Maldives for decades. However, these relations have recently been strained by the Maldives' stronger economic and foreign policy orientation towards China. "We have to weigh our interests. We have to keep the regional stability in view, while the consequences of an intervention are never foreseeable. Such an adventure could end in a failed adventure," an unnamed government official in Delhi told DW. 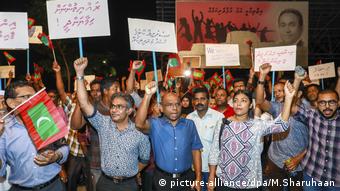 State of emergency in Maldives

According to observers, India fears that an overly robust intervention will drive the Maldives into the arms of China, which has invested heavily in the island nation's economy. In 1988 India sent soldiers to the Maldives to put an end to an attempted coup against then President Gayoom. India has had a naval base there since 2009.

Indian experts say that India is first and foremost about restoring democratic conditions in the Maldives. To do this, India would have to use discreet diplomatic means. "This is a great challenge. Given the relationship that the Maldives have forged with China, any intervention could end in a fiasco. So we have to act very carefully in the interests of regional stability," Indian ex-general Ashok Mehta told DW .

South Asia expert Mahendra Lama also spoke out to DW in favor of cautious action: India should work together with London and Washington to influence Yameen so that he would bow to the ruling of the Supreme Court and start new elections. The foreign policy expert and director of the Carnegie India Institute, C. Raja Mohan, recalls various interventions by India in the neighborhood, be it Nepal, Bangladesh or Sri Lanka, in the newspaper "Indian Express". "The problem was always finding the right time, not so much whether one should intervene at all." But Delhi has learned one thing from the past: It is never easy to solve other people's problems. "Not all consequences of an intervention can be predicted or even controlled." 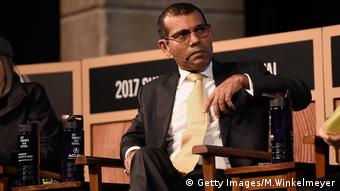 In the meantime, China's mouthpiece "Global Times" insists on targeting "India's great desire to control the South Asian states". The commentator writes in the Chinese-language edition: "India is very sensitive when it comes to these small states establishing relations with other countries on their own." But these countries have now felt the great desire to free themselves from Indian tutelage Maldives related, the commentator writes: "The government of (President Abdulla) Yameen has signed free trade agreements with China and has declared its participation in the New Silk Road initiative and is therefore sharply criticized by the Indian media."

In any case, the sovereignty of the Maldives must be respected, writes the Global Times. "Other countries are not allowed to interfere directly." In addition, all those involved in the Maldives should be called upon to exercise restraint in order to end the crisis at the lowest possible cost and to restore order.