What would cause a wire to melt?

The cut block of ice 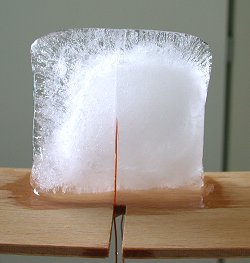 If a wire is stretched over a block of ice with weights at the ends, it will slowly move through the block of ice. So the ice block is cut by the wire. The ice freezes back together above the wire.

A number of books and many Internet sites claim that this effect is due to pressure melting. The pressure exerted by the wire on the ice leads to an increase in temperature due to the density anomaly of the water, which causes the ice to melt.

It is not so. The temperature increase, which can be estimated with the Clausius-Clapeyron equation, for example, is only a small fraction of a degree and is much too small to produce the effect. The riddle is solved if you use a nylon thread of the same thickness instead of the wire. In this case, the ice will not melt. Nylon is a poor conductor of heat. You can see that in the case of the metal wire, the melting is caused by the heat that the wire transfers from the weights to the ice.

Ice skating is related to the theme of the cut block of ice. Between the blades of skates and the ice there is a thin layer of water on which the skates slide. Here there is the corresponding, often widespread claim that the ice under the skates melts due to the pressure exerted and the water layer is created as a result.

This explanation is just as wrong as the analogous one for the cut block of ice. Instead, it is believed that the frictional heat as well as the "surface melting" causes the thin layer of water. Surface melting is the formation of a layer of water without the action of pressure. 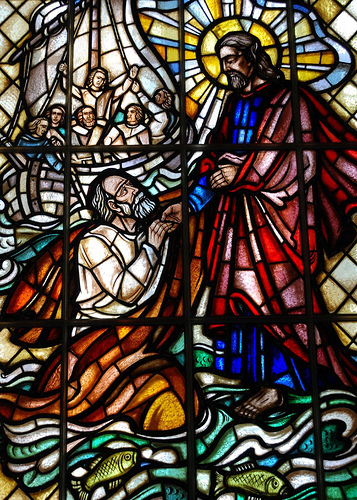 "Glass is not solid, it flows, as proven by old church windows that are thicker at the bottom than at the top."

Not true either! The glass does not flow down in the course of historical times. The corresponding timescale is much larger.

The irregularities in church windows, if any, are instead the result of the manufacturing process.

The integer of the orbital angular momentum

In many textbooks on quantum mechanics, the integer nature of the orbital angular momentum is justified by the fact that the wave function must be continuous and unambiguous. Since the dependence on the azimuthal angle φ is given by exp (i m φ), where m is the magnetic quantum number, m must therefore be an integer.

This argument goes wrong, as Wolfgang Pauli has already shown. The square of the absolute value of the wave function must be continuous and unambiguous, but not necessarily the wave function itself. One needs further prerequisites about the wave functions in order to justify the integer of the orbital angular momentum. 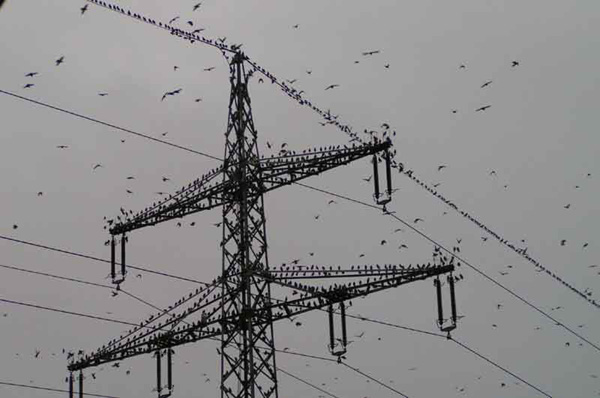 Photo: Dirk Wegener, Münster 2009 (www.rieselfelder-windel.de)
Birds often seem to sit on high voltage power lines without bothering them. Physicists are inclined to give explanations for this according to the following pattern: the birds' feet are so close together that there is no significant tension.

Nonsense! Birds do not sit on power lines. You are sitting on the earth rope, which is not under tension. Strong field strengths occur on the surface of the conductor cables, which would lead to noticeable vibrations and currents in the body that would be very annoying to a bird.

Nevertheless, you can occasionally see birds sitting on live cables. In this case, however, it should not be a matter of high-voltage lines, because from approx. 60 kV it becomes really uncomfortable for the birds.

A. Donges: Do birds really sit on power lines? MNU 53 (2000) 354
H.J. Schlichting: Aim high, Spektrum der Wissenschaft, Oktober 2010, p. 30 (There are a few inaccuracies in this article. It has to be 60 kV instead of 60 kW, statements about the lines are not entirely correct and it is primarily the corona discharges that affect the birds create.)

The burning glass effect when sprinkling the lawn 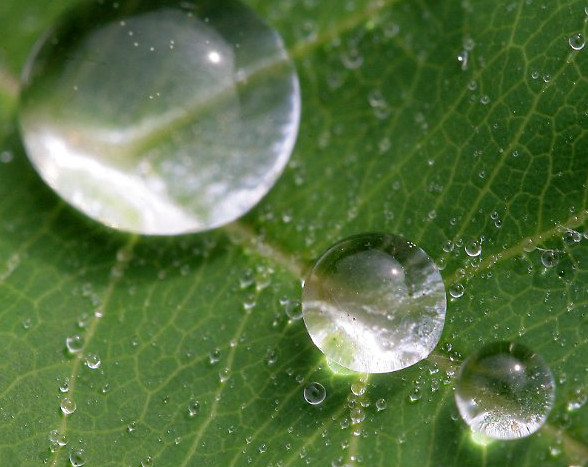 Again and again one hears and reads that a lawn should not be blown up in the midday sun, because otherwise the stalks would burn due to the "burning glass effect". The burning glass effect means that the water droplets act like small lenses and focus the sunlight like a magnifying glass on the blade of grass in such a way that it becomes very hot at the focal point and the blade burns.

However, this is a persistent myth and does not apply. The water droplets on the stalks almost never have the right shape that would be necessary for them to act like a magnifying glass and for the focal point to be on the underside of the droplet and thus on the blade of grass. In addition, the sunlight would also have to have exactly the right angle of incidence.

Shouldn't you spray the lawn in the midday sun for other reasons? Opinions differ on this. Some say that when sprinkling with cold water, the large temperature difference creates a cold shock that damages the lawn. Others say that a thirsty lawn needs water especially in hot lunchtime. 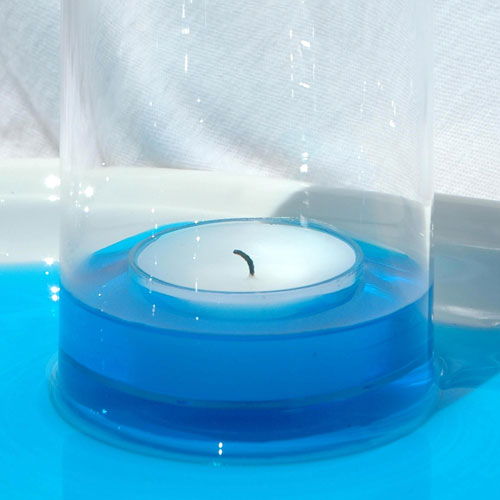 A popular school experiment goes like this: a burning candle is in a bowl that is filled with water. The candle naturally protrudes above the surface of the water. Now an inverted glass is put over the candle. This soon goes out and the water level in the glass rises. The following explanation can be found in many texts: the burning candle consumes oxygen, so the volume of gas decreases, there is a negative pressure and the water rises. E.g. Bavarian Education and Upbringing Plan (2003).

Can that be true? Yes and no, it's not that simple. Oxygen is consumed as long as the candle is still burning, but that creates carbon dioxide and water vapor. So what's going on Well, the water vapor condenses on the wall of the glass. Instead of one mole of oxygen, about 2/3 moles of carbon dioxide then remain. This carbon dioxide partially dissolves in the water. Overall, the gas volume actually becomes smaller. In addition, there is the cooling of the gas. These processes create a negative pressure that causes the water level to rise. In the hands-free experiment, in which air escapes as a result of the heating, the thermal effect (expansion and contraction) contributes significantly to the overall effect.

I am happy to receive advice.
G. Munster
<?