What is optimization in the power grid

Historically grown power grids have a high potential for optimization in terms of grid losses, grid complexity and voltage maintenance. Our network optimization enables these parameters to be improved without requiring additional investments.

Based on the existing network topology and the current switching status, a genetic algorithm uses various switching operations to minimize the total network power loss. In contrast to the current state, the power grid shows improved load distribution, lower utilization and stiffer voltage maintenance after optimization.

Optimized simplification of the network structure

The simplification of the network structure (station reduction) is based on load flow calculations of the actual network in the case of heavy loads. A shutdown of selected network stations is checked under the condition that the quality and security of supply do not decrease compared to the current network status. The stations to be examined are selected in coordination with the municipal utilities and taking into account the station loads and the known age structures. The aim of this study is to reduce the number of system-relevant local network stations while maintaining the same network quality in order to reduce investment costs (renewal) and operating costs (maintenance) in the medium term.

In order to implement the operational requirements of the VDE application rule "Cascade" (VDE-AR-N 4140) with regard to a targeted load reduction, a new optimization method was developed for the separation of the partially or fully meshed low-voltage network. The target network with low-voltage islands, determined using the lowest tree method, mathematically fulfills the specified conditions for voltage maintenance and equipment utilization in heavy and light load cases and enables targeted and non-discriminatory load shedding. In order to implement the determined optimal separation of the meshed LV network, you will receive a complete list of the line switches to be opened and closed. 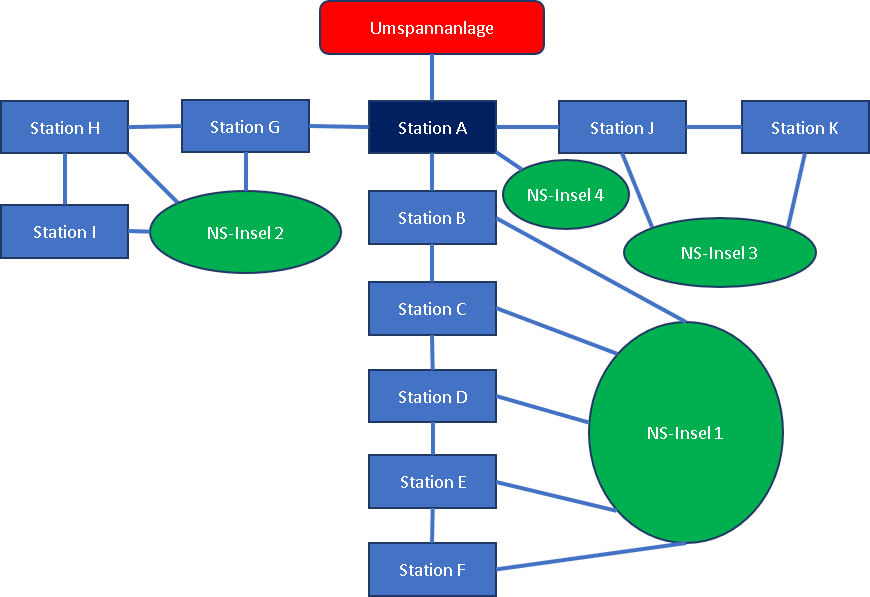 The voltage profile optimization is used to optimize the tap changer positions of local network transformers over the expected range of load and generation states in the network.

Two operating cases are taken into account when optimizing the voltage profile: