Bilingual dictionaries should be removed

App test: what good is the Oxford English exam dictionary? 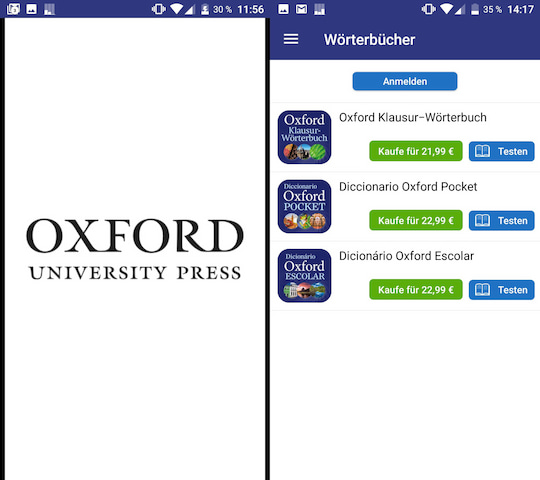 In the age of smartphones, apps and mobile internet, of course, no student likes dragging 2000-page tomes around. This also means that Oxford University Press, as the largest university publisher in the world and publisher of the legendary Oxford English Dictionary (OED), has to break new ground. Since a student obviously cannot pay 215 pounds (about 240 euros) for an online annual subscription to the OED, the publisher had to come up with something else. The publisher has therefore been developing dictionary and learning apps for several years.

Dictionary must be purchased via in-app purchase

Oxford University Press released the Android app Oxford Learner’s Dictionaries: Bilingual Editions with bilingual dictionaries for students learning English as a foreign language in early February (the monolingual Oxford Advanced Learner’s Dictionary [link removed] is still available as a separate app). The publisher has published a total of 32 apps in various languages ​​on Google Play. The app is also available for iOS. 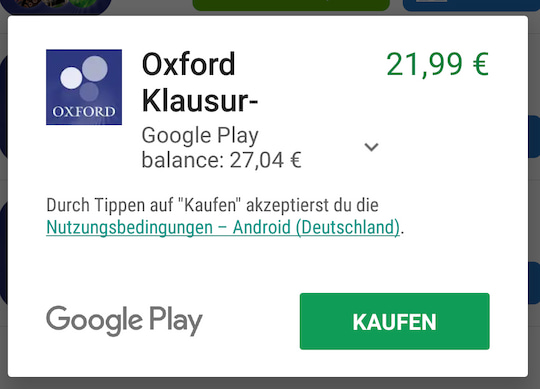 In-app purchase from the Google Play Store
Screenshot: teltarif.de "Oxford Learner’s Dictionaries: Bilingual Editions" is basically just a free downloadable sales app with which the bilingual dictionaries can be tried out to a limited extent. Then the interested party has to decide to buy one of the three available bilingual dictionaries. These are "Diccionario Oxford Pocket para estudiantes de inglés" for Spanish native speakers (22.99 euros), "Diccionario Oxford Escolar para estudantes brasileiros de inglês" for Brazilian-Portuguese native speakers (22.99 euros) and the "Oxford exam dictionary" (21.99 euros) for German native speakers. According to the press office, this is the first dictionary app that the publisher has released for German native speakers.

We decided to test purchase the German exam dictionary and paid the amount with Google Play credit. The dictionary was immediately activated in the app and we were able to download it. It is around 460 MB in size and can either be stored on the internal smartphone memory or moved to a memory card. 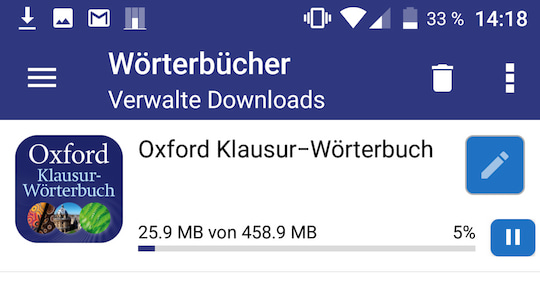 The dictionary is downloaded
Screenshot: teltarif.de

This is what the Oxford exam dictionary offers

In the Oxford exam dictionary, users can search for a word in their own language or in English and switch between the dictionary parts (German-English / English-German) with one click. The app knows both everyday example sentences and idioms. The full text search can also be used to find the word in a sentence in the dictionary. The user can find a word even if he does not know exactly how it is spelled.

The most important 3000 words, which the publisher believes every student should know, are marked with a key. Incidentally, the German exam dictionary is 1 euro cheaper in the app because it lacks features that are contained in the other two dictionaries. This includes color illustrations, info boxes with cultural information or creating your own vocabulary lists using pre-installed subject lists. 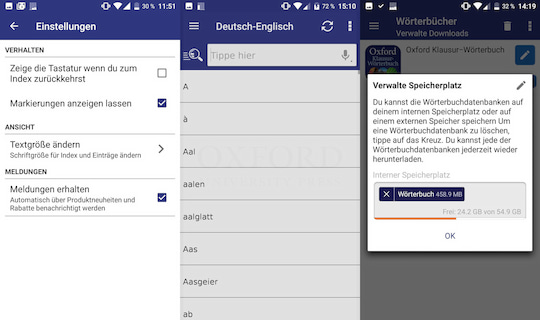 In the test, the Oxford exam dictionary was quick and easy to use. The representation of the vocabulary found is very detailed and the different speakers for American and British English pronounce the vocabulary so clearly that students can orientate themselves very well. The example sentences are all very practical and "taken from life" and the word separation is always clear.

However, you may have to type a lot to really get all the information. For example, if you search for "fully booked", the correct translation is "fully booked". However, you cannot have this combination of words spoken to you. Because now the student must first tap "fully", listen to the pronunciation, then go back, tap "booked" and listen to the pronunciation. It would therefore be desirable for the publisher to also use such word combinations in the future.

Many students today already rely on free or ad-supported dictionary apps and web services. We have therefore repeatedly compared the Oxford exam dictionary in the test with the four best-known free apps in Germany, namely with Leo, dict.cc, Pons and Google translator. When it comes to the wealth of information on a word, the Oxford Exam Dictionary is the most detailed. However, the competing services now all master the voice output of connected words such as "fully booked" or "booked up".

In addition, we had to state in the test that the Oxford exam dictionary actually does not know all the words. When searching for "coati" the dictionary had to match, while all other competing services found the "coati" without any problems. The Oxford dictionary did not know the "fingerboard" of musical instruments either, while Pons, Google Translate and Leo knew the word. dict.cc also had to pass with the "fingerboard". 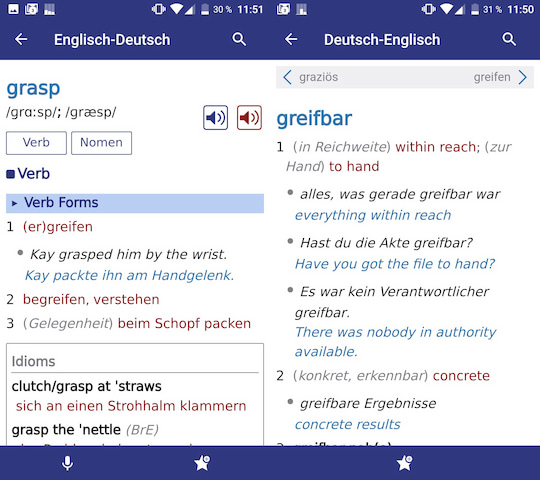 The Oxford exam dictionary cuts a fine figure in the test, because it is mainly suitable for students who not only learn vocabulary, but also really want to learn the language English. To this end, the dictionary provides a large number of example sentences and idioms that allow the student to develop a feeling for the use of the words in the sentence. None of the free competitors can do this as well as the Oxford exam dictionary.

Schoolchildren and parents should therefore consider whether they really want to invest 22 euros in an app that helps to learn the language well, but which still has to be supplemented by free services when it comes to technical terms.