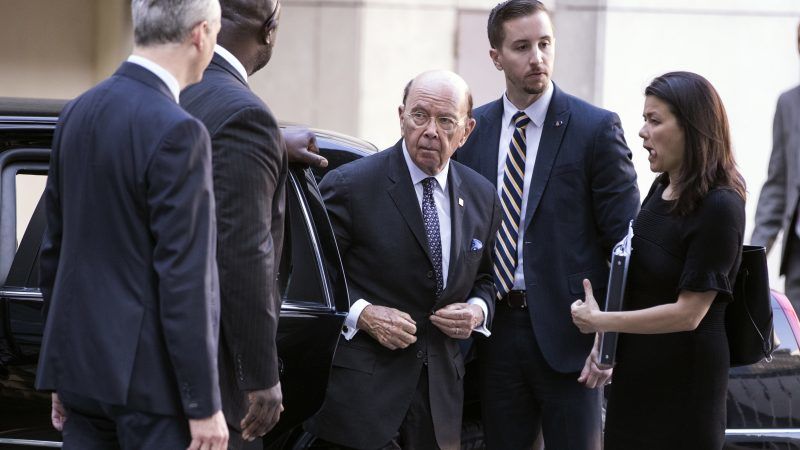 The time of grace periods and grace period extensions is over. Starting today, European metal will be subject to import duties in the USA.

Because Washington is realizing its threats and, according to an announcement made yesterday by Trade Minister Wilbur Ross, is also levying import duties of 25 and 10 percent on steel and aluminum from the EU, respectively. During the two-month phase in which the EU, like Canada and Mexico, were exempt from tariffs, there were repeated talks between the EU Commission and the US Department of Commerce. The EU was apparently unable to offer sufficient measures of its own to reduce the massive trade surplus with the USA.

The tariffs went into effect at 6:00 a.m. this morning. The legal justification for the step is national security. The government uses a law from 1962 to do this. Many critics doubt that this is an appropriate legal basis. But that doesn't really matter in the end.

The EU products affected by the levies have a total volume of 6.4 billion euros. As a "retaliation", US products such as whiskey, jeans and motorcycles are now to be charged an additional fee. However, the volume of EU tariffs should only be about half that of US tariffs. They want to continue to present themselves ready to negotiate, as the chairman of the trade committee in the EU Parliament, Bernd Lange, explained to EURACTIV.

The German economy reacted with concern. These concerns are likely to be primarily about the risk of a possible further escalation. The US Department of Commerce let the EU know that in the event of countermeasures, tariffs could continue to be levied, as counter-countermeasures, so to speak. Once again, the automotive sector was addressed directly. A review of whether the car imports pose a threat to national security under the 1962 Act is already underway.

Now, however, the automotive sector is the heart of the German economy - a heart that has had to swallow many bitter pills in the recent past due to Diesegate, refusal to renovate and the takeover of Opel by the French PSA group. Another severe blow could gradually push the sector into crisis.

After all, Trump is thinking aloud about car tariffs of 25 percent. The surcharge is currently only three percent. The increase would be substantial and would significantly affect the competitiveness of Daimler, VW, Porsche and Co in the US market. So there is still a fair bit of room for improvement in the trade war.

Bernd Lange (SPD, Chairman of the EU Parliament's Trade Committee): "Extortion is not a means of negotiation. The European Union will unite countermeasures and sue the USA at the World Trade Organization! While the European Union advocates the strength of the law, the Trump administration alone is spreading the right of the fittest. "

Frank Sportolari (AmCham Germany): "A further escalation of the trade conflict must be avoided at all costs. The EU should react prudently and continue to seek dialogue in order to prevent a spiral of measures and countermeasures. A new trade agreement with the USA must be sought . Only together can the scope for adjustments in transatlantic trade be explored. I appeal to those involved to resolutely advocate open markets and free and rule-based trade. The German and American economies in particular are closely linked. "

Christian Ossig (Chief Executive of the Banking Association): "The American policy of isolation with punitive tariffs and unilaterally imposed sanctions represents an increasing threat to world trade. It is very regrettable that it has not been possible to defuse the trade conflict between the USA and Europe The EU is now required to react prudently and to find the right answers. A drifting into a spiral of protectionism - which could end in a global trade war - must be prevented in any case. "

Hans Jürgen Kerkhoff (President of the Steel Federation): “The steel industry in Germany condemns this step. After this decision, it is now important to at least protect steel companies from diverted trade flows. EU safeguard measures should be country-specific, include all examined products and be effectively designed. "

Fabio De Masi (Member of the Bundestag, Die Linke): "German economic policy has developed into a boomerang. Trump means business. Punitive tariffs could soon hit Mercedes or BMW in addition to steel and aluminum and favor economic shocks Ignored German export surpluses and thus diplomatically disarmed US President Donald Trump. The US is not Greece. It makes a difference whether a German shepherd bites a hamster or a pit bull. "

Media are a pillar of democracy - as long as they can function well. Now, more than ever, we need unbiased, informed information about how - and why - the European Union works. This information should not be hidden behind a paywall. We continue to undertake to make our content available free of charge.

We know that our readers value our reporting. We know that journalism that reports about the EU in a clear and unbiased manner is essential for the future of the European Union.

And we know that your support is essential so that such independent and (free) free journalism can continue to exist.

Don't take the media sector for granted. The media were in a precarious position even before the coronavirus pandemic. And since people cannot currently meet, the industry is losing one of its main sources of income: events. EURACTIV is funded through a mix of revenue streams including sponsorship, online advertising, EU-funded projects and political debate events. All of these sources of income are affected by the current crisis.

As the media struggles to survive, disinformation flourishes and flourishes at the same time. We are already seeing a lot of scare tactics, fake news about the EU's reactions, and increasing threats to press freedom.

We have been providing free, independent, multilingual coverage of the European Union for over two decades. We continue to believe in Europe; and we hope you do too.

Your financial support at this critical time would allow our network of newsrooms across Europe to continue its work - at a time when Europe needs them most.

Thank you for supporting the EURACTIV media network!

Do you appreciate our reporting? We need them!

Your financial support during this difficult time will enable our editorial network across Europe to continue its work when Europe needs it most.