Why is Winston Churchill heroic

The victory sign (Victory = English victory, from Latin victoria) is a hand gesture in which the index and middle finger are stretched out to form a "V" while the ring finger and little finger remain drawn in. The thumb is placed over the two fingers and the palm of the hand points away from the person performing the task. 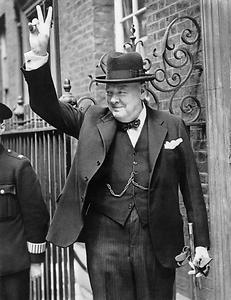 The Victory symbol was made particularly popular during the Second World War by the British Prime Minister
Winston Churchill.

The leitmotif of Beethoven's 5th Symphony was used as a jingle by the BBC during World War II because of its meaning as the letter "V" for Victory in the Morse alphabet (... -). example

Beethoven's 5th Symphony was also called the “Fate Symphony” in the past; it was created during a difficult phase in the composer's life (Beethoven is said to have said about the four famous opening notes: “So fate knocks at the gate”, although this has since been documented as a later legendary attribution). First performance: December 22, 1808.

For the National Socialists and the German Wehrmacht in World War II, the "enemy propaganda" with the "victory sign" was rather disruptive, so a direct optical counter-offensive was attempted by styling the letter "V" itself as a symbol for the "final victory". The picture shows the former Yugoslav Ministry of Agriculture, which housed the Radio Belgrade studio. This soldier broadcaster became very well known by the daily broadcast of the song "Lily Marleen" among the German soldiers, but also among the armed forces of the allies. On the facade of the house was a banner with the inscription "Germany wins on all fronts", above and below the white "V".

"When people came out of their damp, unheated houses to greet the sun and the returning warmth, they started writing on the walls. The little boys wrote 'Vive les pineurs', or more simply, 'Vive moi'. Others painted large V's in bright red or indelible black on the walls of houses or the entrances to cinemas and public buildings, and then others came by and wrote or painted P's behind the V to turn the Victoire into a Vive Petain. And when the BBC called on the French one evening to put H's after the V's, for “Vive l'honneur,” Marseille was littered the next morning with VH's. This so-called “battle for the walls” lasted months and years and took on new ones Forms, but didn't stop. "
Source: Varian Fry, Delivery on request, Hanser, Munich 1986 p. 214

In the background of the most famous hand sign of all time stands a curious legend.

Yes, indeed: Opinions are divided about Winston Churchill. Tomorrow, Saturday, January 24th, 2015, the 50th anniversary of the death of the British Prime Minister who led his nation into the fight against National Socialism will be celebrated. If most historians consider Winston Leonard Spencer-Churchill to be the heroic figure and the most important British politician of the 20th century, there are also voices who see him as an adventurer and gambler and believe that he has too many interests in the Yalta conference represented democratic Europe at risk and thereby admitted the Soviet Union and the USA as new superpowers. But the historians should debate their heads about this - one thing remains undeniable: Churchill is the inventor of the most famous hand sign of all time: the one formed by the index finger and middle finger "V" for "Victory". Behind this sign a nation fought and tolerated and suffered for freedom and democracy.

But is he actually the inventor of the sign? There are various legends. One of them looks like - no, not like a thriller, more like a horror story. Because in it the British Satanist plays Aleister Crowley (1875-1947) played a leading role.

Well, the matter is not historically certain, and Crowley has made some claims. "Do what you want, the whole law should be", was the creed of the anti-Christian belief system he created. Few of man-made belief systems are similarly accurate to what William Shakespeare had Polonius say about Hamlet: "If this is madness, it has method." While most of these belief systems tend to be madness without any method, there is a system behind Crowley's philosophy, albeit one that is highly heterogeneous and contains elements that are based on misunderstandings or mere hearsay.

As a person, Crowley was colorful - and this word is clearly a euphemism for a man who, to name just a few key points, participated in a British-Austrian expedition led by in 1902 Oscar Eckenstein participated in a record for the first ascent of K2 despite the fact that the summit victory was unsuccessful; who carried out anti-British propaganda from the USA during World War I and spied on behalf of the British at the same time; who founded Thelema Abbey in Sicily in 1920 and ordered the Thelemites to have their heads shaved except for a phallus-like curl (which probably made it impossible for bald people to be admitted to the abbey); who faked a suicide in Portugal in 1930 in the hope of disappearing from the scene to become Adolf Hitler's occult advisor - "Before Hitler was, I am!", Crowley said, alluding to Christ's word, "before Abraham was, am I". No wonder that Crowley provides material for literature and film - and that already during his lifetime: William Somerset Maugham 1908 writes his novel "The Magician" in which the occultist Oliver Haddo clearly bears Crowley's features. In 1926 Rex Ingram filmed the book with Paul Wegener in the role of the maiden-slaughtering magician. In the year of Crowley's death, Jacques Tourneur filmed "Night of the Demon" with a Crowley-like magician who conjured up a fire demon, and in 2008, long after Crowley's death, Bruce Dickinson, singer of the British heavy metal band Iron Maiden, released the movie "Crowley - Back from Hell" in which Crowley took the body of a Dr. Haddo takes possession. Today, esoteric shops from all over the world also carry various writings by Crowley and of course the Tarot he designed.

It is nevertheless entirely conceivable that Crowley, apparently affinity for Hitler, provided Hitler's sharpest opponent, who was undoubtedly Churchill, with an anti-Nazi symbol from the very first moment. Loyalty wasn't one of the Satanist's strong points - and there was also his relationship with the Secret Intelligence Service, later MI6, from his espionage activities during World War I. "Do what you want" seems to have been Crowley's avowal in political matters too. Anyway, in 1910 Crowley had in "The Equinox I" published an interesting ritual in this context. In it he refers to Egyptian mythology. According to his interpretation, Apophis, god of dissolution, darkness and chaos, kills Osiris, god of the afterlife and resurrection, and thus triggers the grief of Osiris ’wife Isis. Crowley symbolizes the mourning of Isis with the old symbol of the swastika, which has not yet been affected by the Nazis, and Apophis with a V, which has no literal but only a magical meaning. There Apophis-V the mourning of the Isis swastika triggers, Crowley understands the V as a triumph over the swastika. With that Churchill's sign would be well founded - in purely ritual-magical terms ...

And Crowley was well aware of the power of magical hand signals. Some are quite common, for example the index finger and little finger stretched upwards, which means a satanic greeting (the Danish film director Lars von Trier always shows it at the end of the episodes of his TV series "Geister"). Other signs are written in the air or drawn on the body, mostly with the oath fingers. Strictly speaking, the sign of the cross is also a kind of magical symbol - in fact, many people used it in the past when they encountered something bad. It acted as a kind of protective spell. Then, thanks to Aleister Crowley, Winston Churchill would have penetrated deep into magical - if not black magic - realms? But I spoke of "legends". And the one that Crowley brought into the world simply fits so beautifully with the victoriously victorious V against the swastika. The more mundane explanation cannot keep up with such a story - no matter how much more likely it is.

The Belgian Minister of Justice proclaimed the V as a sign of victory Victor de Laveleye. Laveleye went into exile in London in 1940 and gave speeches to his compatriots on Radio Belgique, a BBC station. On January 14, 1941, he asked the audience to spread the V sign. There was no magic behind it, but simple symbolism: The V would stand for the French "victoire" and the English "victory" as well as for the Dutch "vrijheid" (freedom). The BBC supported the dissemination through its "V for Victory" campaign, in which they used the Morse code "V" as a familiar topic. This is short-short-short-long. It thus corresponds to the main theme of Ludwig van Beethoven's first movement Fifth symphony - which was consequently used by the BBC as a signal for reports on the war situation. (This explains how the composer of the warring nation got the honor of introducing British reports of victory.) Immediately after Laveleye's address, Churchill picked up the symbol that has since been identified with him.

As simple as that.

Disregarding the fact that Crowley has claimed that his magical and by no means "victoire" symbolic mark was not suggested to Churchill, but - yes: Laveleye ...

Whoever wants to use it should in any case make sure that the back of the hand points towards the person performing it. On the other hand, at least in Great Britain, Ireland, Australia, New Zealand and South Africa it is understood as "finger fingers". Reasons for a victory move may be a long way off.