Are there American martial arts

The Asian martial arts originally came to the United States via the Pacific. Of course, the stationing of the GIs on Okinawa plays one of the biggest roles in this, but Hawaii deserves more attention than was previously generally assumed. When the Asians, mainly Japanese and Chinese, came to Hawaii to work on the plantations there, they also brought their traditions and culture with them. This also inseparably included the respective martial art.

Until the outbreak of the Vietnam War, the Asians and now the Hawaiians remained mostly to themselves, but then the residents of the other 48 states joined them, they were stationed on the islands, came into contact with the martial art on this occasion and took it after their service time home with me.

Because of this unstoppable "import", the martial arts in the Asian quarters such as "Chinatown" or "Little Japan" were no longer a secret, so that the Asians now opened schools that were open to everyone, including Iteki and Da Bize (Japanese for barbarians and chin . for long noses) were accessible.

Many American teenagers who would otherwise have learned good old boxing threw themselves into karategis or kung-fu uniforms, mumbled "Ossu", "Sifu" or "Sensei" on all occasions and discussed the existential question: "Which is better, western Boxing or one of the Far Eastern martial arts? "

You bet on the kung fu or karate fighter because he had his feet in addition to his hands ...!
In the first real match fight in the USA the boxer caught a kick and knocked out the now one-legged fighter! Doubt was sown, why all the esotericism - better the good old boxing school? In a real fight, wouldn't the bigger, stronger fighter always win?

Cagefightings, the so-called "cage fights", suddenly became very fashionable, professional fighters beat each other until they were knocked out. "Ground and Pound" was the new motto.

The fight was still there, but where was the art? Haven't the Asians long ago sat on empty treasure chests, could they still save the reputation of martial arts? The rescue came, but not from Asia but from a completely different corner of the globe - Brazil.

Curtain up - appearance: "The Gracie Family"

Jigoro Kano was tired of judo being underestimated in the motherland of Japan, true to the motto “the prophet in his own country is worthless” he sent his students out into the world. One of them was Maeda "Conde Koma" Mitsuyo, he ended up in Brazil and there he met the brothers Carlos and Helio Gracie. The Gracies no longer called what they learned from Maeda Sensei Judo, but Brazilian Jiu-Jitsu. They put the fight on the ground and it was again a matter of technique and not just strength. The word art in the term martial arts was filled with content again!

In the 1990s, Royce Gracie came to California to help his older brother open a school. Shortly thereafter, the Gracies offered $ 100,000 to anyone who beat Royce in the ring. Nobody succeeded. Royce went down with them and used arm, leg, or foot levers, or a strangling technique, and the fight was over. The Ultimate Fighting Championships, or UFC for short, were born.

The old question was there again: “Which martial art is the best?” The Gracies organized these championships in a knockout system and everyone could take part: judoka, wrestlers, boxers, muay thai fighters, karateka, kung fu stylists, capoeirista and and and. Royce Gracie defeated them all and showed that you were not powerless against a bigger and heavier opponent, there was Brazilian Jiu-Jitsu and the Gracie family and their cousins, the Machados, did everything to help the BJJ to its greatness . The old question was now joined by a new one: “Can BJJ be beaten? And if so, how? ”-“ I have to learn to hit the Jiu-Jitsu fighter before he hits me in the ground, but how? ”The answer was:“ MMA - Mixed Martial Arts ”! Everything that promised success was integrated here: techniques from wrestling, boxing, jiu-jitsu, muay thai, kyokushinkai karate etc. pp. - and all of them combined in meaningful combinations.

That brings us back to what the old Asian martial arts teachers always said: “Use whatever decides the fight for you at this precise moment in the fight.” - and what Bruce Lee expressed in moderate terms when he said: “Absorb what´s usefull ". 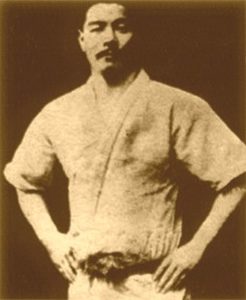 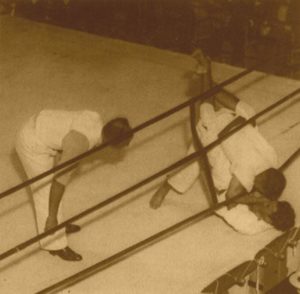 Helio Gracie versus Taro Miyake in the 30's