What are the properties of Babbitt Metal 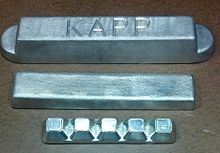 Babbitt metal or Bearing metal is one of several alloys used for the bearing surface in a plain bearing.

The original Babbitt alloy was invented by Isaac Babbitt in Taunton, Massachusetts, USA in 1839. He disclosed one of his alloy recipes but kept others as trade secrets. Other formulations were later developed. Like other terms whose origin of the same name has long since ceased to be emphasized (e.g. Diesel engine or Eustachian tube ), becomes the term Babbitt metal often written in lower case. It is preferable to the term "white metal" as the latter term can refer to various bearing alloys, lead- or tin-based alloys, or zinc die-cast metal. 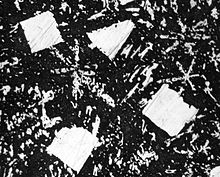 Babbitt metal is most commonly used as a thin surface layer in a complex multi-metal structure, but its original use was as a cast - in-place bulk storage material. Babbitt metal is characterized by its resistance to abrasion. Babbitt metal is soft and easily damaged, which suggests it is unsuitable for a support surface. However, its structure is made up of small hard crystals dispersed in a softer metal, making it a metal matrix composite. As the bearing wears out, the softer metal erodes somewhat, creating lubricant paths between the hard high spots that make up the actual bearing surface. When tin is used as the softer metal, friction causes the tin to melt and act as a lubricant, protecting the bearing from wear when other lubricants are lacking.

Internal combustion engines use Babbitt metal, which is primarily tin-based because it can withstand cyclical loads.

In the traditional style of a Babbitt metal bearing, a cast iron pillow block is assembled as a clearance fit around the shaft, with the shaft in approximately its final position. The inside of the cast iron pillow block bearing is often drilled to provide a key to locating the bearing metal when it is cast in place. The shaft is coated with carbon black as a release agent, the ends of the bearing are filled with clay, and molten metal is poured into the cavity around the shaft, first filling the pillow block half full. The bearing is stripped off and the metal cut back on top of the pillow block bearing. Hardened Babbitt metal is soft enough to be cut with a knife or sharp chisel.

A steel shim is used to protect the lower bearing surface and the space that removes the cap of the bearing block from the shaft. After resealing the ends with clay, more metal will be poured to fill the pillow block cap through the hole in the top of the pillow block cap which will eventually be a lubrication hole.

The two halves of the bearing are then split at the washer, metal clearing the oil holes and cutting oil paths in the surface of the new bearing. The shaft is smeared with engineering blue and rotated in the bearing. When the bearing is disassembled, the blue fills the depressions and is rubbed off from the high spots. The high spots are scraped off and the process repeated until an even and evenly distributed blue pattern is visible when the shaft is removed. The bearing is then cleaned and lubricated and aligned so that the shaft is held in place but does not bind in the bearing. The bearing is then "run in" by being heavily lubricated at light load and rotation, thereby completing the process of exposing the hard bearing surface. After the final adjustment of the shimming, the result is a very reliable and heavy-duty storage life.

Before the advent of inexpensive electric motors, power from a central motor was distributed across factories via overhead shafts running in hundreds of Babbitt bearings.

The term "bearing" is also derived from this type of bearing, since failure of lubrication results in heat build-up due to friction in the bearing, which ultimately leads to the bearing metal liquefying and leaking out of the pillow block.

Cast Babbitt bearings were common in automotive applications until the mid-1950s. The babbitt was poured into the block or caps using a mold. Tin-based babbitts were used because they could withstand the shock loads from the connecting rods and crankshaft. The cast Babbitt bearings were kept thin. The rods and caps had washers that peeled off while wearing the Babbitt. Ford was known to use two .002 inches for each cap and Babbitt for 86% tin, 7% copper, and 7% antimony (see KRW catalogs for the Model T). Steel washers were used, as do the brass washers in use today, compressing over time, which contributes to shorter bearing life. Babbitt cast bearings are typically used over 50,000 miles before they need to be replaced. Gossene Babbitt bearings are also known to fail properly, allowing the vehicle to be driven for extended periods of time. The failed bearing is unlikely to damage the crankshaft.

In more modern practice, the crankshaft and connecting rod connecting rod bearings in modern automotive engines are made from a replaceable steel jacket, wedged onto the bearing caps. The inner surface of the steel shell is covered with a bronze coating, which in turn is coated with a thin layer of Babbitt metal as a support surface.

The application of this white metal layer is known as babbitting.

Rolling bearings such as ball or roller bearings have replaced Babbitt bearings in many applications. Although such bearings can offer a lower coefficient of friction than plain bearings, their main advantage is that they can operate reliably without a continuous supply of pressure lubricant. Ball and roller bearings can also be used in configurations that must accommodate both radial and axial thrust forces. However, rolling bearings lack the beneficial damping and shock resistance offered by liquid film bearings such as the Babbitt.

The Science of Babbitt Selection

The Babbitt liner design of a bearing is usually completed during the design of the machine. There are a number of factors to consider when choosing the right type of Babbitt for a particular job, the most important of which are:

There is no doubt that a high tin alloy is desirable if a bearing is to be heavily loaded relative to its size; For work at a much slower speed and less heavily loaded bearings, a lead-based babbitt can be used, which is far more economical.

1. Surface speed of the shaft: (The number of feet the shaft travels in the circumferential direction per minute.)

2. The load-bearing capacity is required to support: (the weight placed on the shaft by the combined weights of the shaft and any other direct weights, measured in pounds per square inch.)

While no precise calculations are required, the following considerations must also be kept in mind:

Once the bearing has performed well over many years, it simply needs to be rebuilt to its original specification and formulation. In this case, the technician's biggest concerns are:

Eco-Babbitt is an alloy of 90% Sn, 7% Zn, 3% Cu, which is technically not a Babbitt metal. For more information on Eco-Babbitt, see Solder - Solder Alloys.