What are the disadvantages of an autotransformer

The autotransformer, the English name is autotransformer, has a winding with at least one tap for the secondary output. Several taps can also be provided for different secondary voltages. The primary and secondary winding (s) are electrically (galvanically) connected to one another and form a series circuit. The part of the winding that is shared by both circuits is also called the parallel winding. The partial winding used by the primary or secondary circuit is called a series winding.

The energy is transferred both through a direct power line from the source connected to the primary circuit to the secondary circuit and through the magnetic coupling with the aid of the closed iron core. Compared to the transformer with independent windings, the autotransformer has a lower current flowing in one winding part, so that conductor material can be saved there with a smaller wire cross-section. Savings are also possible with the core material, since part of the secondary power is already provided by the direct power line without the involvement of the magnetic field. An autotransformer can be used to transform both downwards and upwards or a combination of both methods.

The connections of the primary winding are usually marked with capital letters. The secondary connections are indexed with increasing voltage. The common reference point, the circuit ground, is N. In the example shown, a low primary magnetizing current Ip flows from L to N when there is no load and generates the secondary voltage Us2. When idling, the primary and secondary voltage have the same phase position.

If the node rule of the currents is applied to the marked secondary connection, Ip flows into the node, Is out of the node and the not yet determined current I coming from N into the node. The sum of the current in the node must be zero, the following applies: Ip - Is + I = 0. The differential current I = Is - Ip flows in the parallel winding. This enables the secondary current to be determined: Is = Ip + I. If the secondary circuit is viewed in isolation, a larger load current and a smaller current flows through the load resistance back into the secondary winding, the source of the secondary voltage. In the load case, the secondary voltage generated by the magnetic coupling is consequently lower and the seemingly missing portion is generated by the direct current from the primary circuit at the load resistance.

The behavior of an autotransformer could be measured in the laboratory and examined with a simulation program. The following shows the simulation results of the voltages and currents for the no-load and load case with secondary ohmic load. The measured values ​​agree quite well with the calculated values ​​that are obtained with the aid of the idealized transmission ratios. 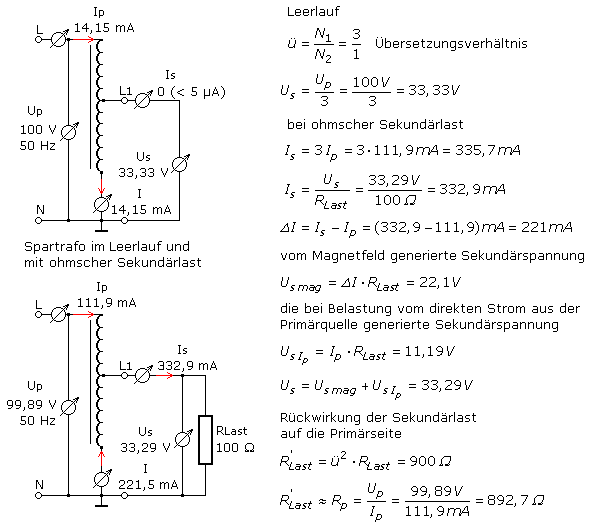 A corresponding simulation test was carried out for the step-up transformation with an autotransformer. The following figure shows the measuring circuit and the values ​​determined for no-load operation and ohmic load. Here, too, the measured values ​​agree quite well with the results that can be calculated using the idealized gear ratios. 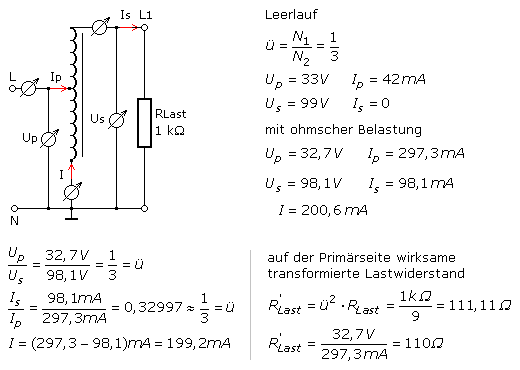 In both cases, when the secondary circuit is loaded, the partial winding referred to as series winding is traversed by the lower current. The current difference from the secondary and magnetizing current flows in the parallel winding common to the primary and secondary circuit. In the case of an autotransformer with a tap, a smaller wire cross-section can be selected for the series winding. The copper savings can be calculated as a percentage of the ratio of the lower voltage to the higher voltage. For the autotransformer used in the simulation experiment it would be 33%. 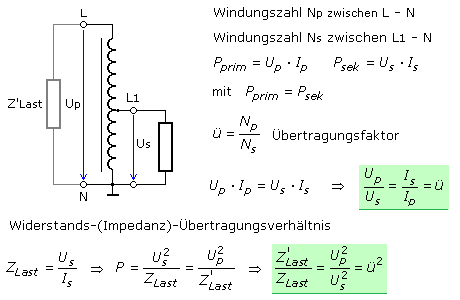 An output transformer of a tube output stage has 5800 turns on the primary side. The secondary side has three connections for different speaker impedances. For 16 ohms are 370, for 8 ohms 260 and for 4 ohms 185 turns. If the primarily effective transformed resistance is calculated for each secondary load with the associated square of the transfer factor, the result is always around 3.9 kOhm. The primary winding represents the working resistance of the tube output stage. To ensure that the output stage is not damaged when the loudspeaker is not connected, the secondary side is terminated with a preload resistance value that is 20 to 60 times greater. During operation, the parallel speaker impedance determines the secondary load.

With autotransformers, power is transmitted both through the direct current flow from the primary source and through the magnetic coupling. The construction work P (S) B is assigned to the magnetic field and, in connection with the core material, determines the size of the transformer. The throughput P (S) D is the total transmitted power from the direct current power and the magnetically transmitted component. For a certain throughput, the construction output can be calculated taking into account the primary and secondary voltage. The idealized formulas differ for the downward and upward transformation. The ratio can also be calculated independently of the primary and secondary voltage using the higher high voltage and lower undervoltage.

The possible savings in copper material due to the smaller wire cross-section of a partial winding can be calculated from the ratio of the lower voltage to the higher voltage and is given as a percentage. 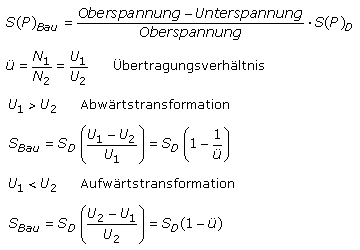 The secondary connection is tapped with a carbon grinding wheel along the entire coil path. The secondary voltage can be set from 0 volts to the maximum primary source voltage. If the primary connection is located on a winding tap, secondary voltages above the source voltage are also possible. The enamel insulation of the coil wire is removed along the running surface of the carbon brush and the turns are otherwise isolated from one another. Variable transformers, which are also available as isolating transformers, are not autotransformers. They have two galvanically separated windings and the carbon brush is tapped on the separate secondary winding. The advantage of material savings is not given for these transformers. Material savings not possible.