Which famous personal grave have you visited?

A dazzling life is often reflected in an imposing tomb. Many celebrities stay in the memory for a long time after their death, and some only achieve true fame afterwards. We have put together seven graves of prominent personalities for you, some of which are strikingly inconspicuous. 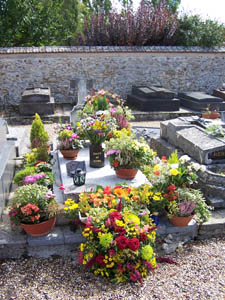 Romy Schneider (bourgeois Rosemarie Magdalena Albach) was a German-French actress who was best known for the "Sissi" trilogy. She was found dead at her desk in Paris on May 29, 1982. Heart failure was given as the official cause of death, but the media spoke of suicide. Schneider was buried in the cemetery of Boissy-sans-Avoir, a small community in the Yvelines department in the Île-de-France region. Her son David Christopher, who died in an accident in 1981 at the age of 14, was also transferred to her grave. 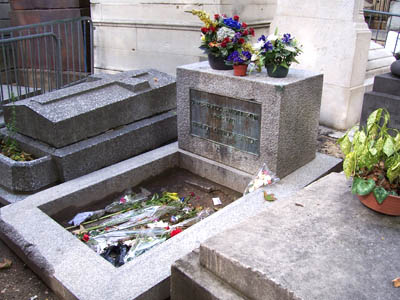 James Douglas "Jim" Morrison was an American singer, songwriter, and poet. He became known as the front man of The Doors. There are some legends surrounding Morrison's death, officially it was called cardiac arrest. However, since the singer's drug and alcohol problems were well known, more belief is given to the heroin overdose theory. He died on July 3, 1971. Four days later he was buried in the Père Lachaise East Cemetery in Paris. After a small stone tablet was stolen in 1973, a tombstone was not erected until June 1981, financed by the three remaining Doors musicians. In December 1990, Morrison's parents had a new monumental tombstone built with a bronze plate. The bronze plate bears the ancient Greek grave inscription "κατὰ τὸν δαίμονα ἑαυτοῦ", which means "according to his demon" or "according to his fate". The tomb is one of the most popular tourist attractions in Paris. Every year it is visited by up to 1.5 million visitors. 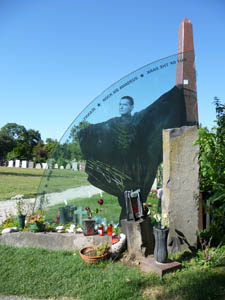 Falco (bourgeois Johann Hölzel) was an Austrian musician who was best known for songs like "Rock me Amadeus" and "Der Kommissar". He died on February 6, 1998 in a car accident in the Dominican Republic. During the autopsy, he was found to have a blood alcohol level of 1.5% and large amounts of cocaine and tetrahydrocannabinol (THC). He was buried in the Vienna Central Cemetery, where his grave is still visited by fans today. 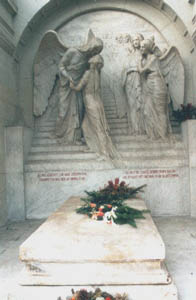 Karl Friedrich May was a German writer who became famous for adventure novels such as "Winnetou" and "Old Surehand". He died on March 30, 1912 of cardiac paralysis, bronchitis and asthma, although undetected lung cancer was not excluded. He was buried with his wife Klara at the Radebeul-Ost cemetery in the so-called May tomb. The crypt is reminiscent of a Greek temple, inspired by the Acropolis in Athens. Inside there is a group of figures made of marble by Selmar Werner, called "Angels receive an earthly soul". It is illuminated by the light falling through the glass roof. Today the May tomb is a listed building. 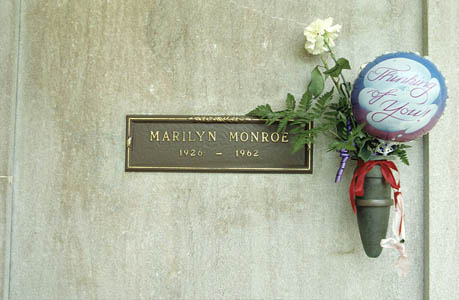 Marilyn Monroe (real name Norma Jeane Baker) was an American film actress, model, singer and film producer. She died on the night of August 4-5, 1962 at the age of 36 in her bed in Brentwood, Los Angeles. The cause of death was an overdose of the barbiturate Nembutal in combination with the sleeping pill chloral hydrate. There has been much speculation about her death, including suicide, accidental overdose, medical malpractice, and even murder theories. Monroe was buried in a bronze coffin in the Corridor of Memories at Westwood Village Memorial Park Cemetery in Los Angeles on August 8th. 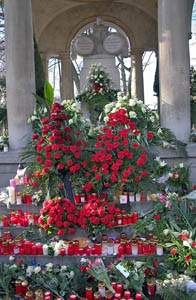 Rudolph Hans Albert Moshammer was a German fashion designer, author and owner of a boutique on Maximilianstrasse in Munich. He was strangled with a cable on January 14, 2005 by Herisch Ali Abdullah. The burial took place in a mausoleum directly at the entrance to Munich's Ostfriedhof, where his mother was also buried. 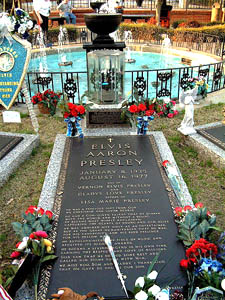 Elvis Aaron Presley was an American singer, musician, and actor who became known as the "King of Rock'n'Roll". He died August 16, 1977 of sudden cardiac death caused by a congenital heart defect and other health problems such as glaucoma, chronic bowel disease, anemia, high blood pressure and bone cancer. On August 18, 1977, he was buried next to his mother in Forrest Hill Cemetery. After attempts had been made to steal the singer's body, the heirs received special permission to bury Elvis and Gladys Presley in the meditation garden on the Graceland estate in early October 1977. The grave is adorned with a plaque and the inscription of his father Vernon Presley. The resting place of Elvis Presley is so significant that the US Department of the Interior declared it a National Historic Landmark in 2006. Even today, up to 600,000 fans make the pilgrimage to the tomb every year.

Which famous celebrity burial sites do you know? Have you already visited one? Comment and discuss on our Facebook site.