Tackling racism at the root, for many Americans this also means rethinking the memory of their ancestors from the southern states from the time of slavery. Others even go back to the discoverer Christopher Columbus. But where do you start and where do you stop?

US House Chairwoman Nancy Pelosi has called for memorials dedicated to 19th century leaders in the United States who advocated the preservation of slavery to be removed from the Washington seat of Congress. The leader of the opposition Democrats wrote to a bipartisan committee with these eleven statues from the time of the Confederate States of America. The men honored with these monuments stood up for "cruelty and barbarism". The proposal is not entirely new: As early as 2017, Pelosi demanded the removal of the "southern heroes". 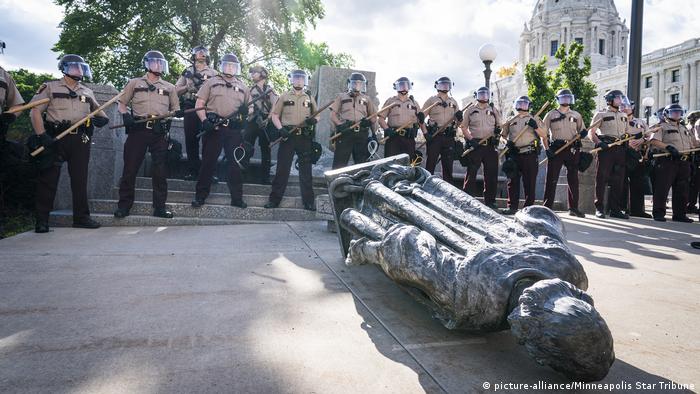 The background to the renewed discussion about racial inequality in the USA is the violent death of the African American George Floyd by a white police officer. Since Floyd's death, officials in many parts of the southern United States have ordered the removal of monuments in honor of the Confederation.

US President Donald Trump clearly rejected the idea of ​​renaming US military bases named after Confederate leaders. The bases are part of the "great American heritage," he wrote on Twitter. "Because of this, my administration will not even consider renaming these wonderful and legendary military facilities."

The US Navy announced on Tuesday that it was working to ban the Confederate flag from all public spaces on its facilities, ships and aircraft. While some in the southern United States proudly view the flag as a reminder of the soldiers who fell in the Civil War (1861-1865), many Americans see it as a symbol of oppression and a dark chapter in American history.

The protests also focus on the seafarer Christopher Columbus from Genoa, who is considered the discoverer of the American continent. Critics argue that Columbus pioneered the colonization and killing of countless indigenous people. A monument to Columbus was overturned in St. Paul, Minnesota, as was in Richmond, Virginia. There the memorial was also set on fire and thrown into a lake. A statue of the discoverer was beheaded in Boston, Massachusetts.

Removed from the program

The US streaming provider HBO max caused a stir with the announcement that it would take the classic film "Gone with the Wind" out of the program for the time being. The Warner Media company wanted to explain the film's racist prejudices and the problematic portrayal of slavery, said a spokesman. "Gone with the Wind" was published in 1939 and tells the story of the landlady Scarlett O'Hara in the US southern states during the civil war. Even after the abolition of slavery, some of the former slaves in the film are voluntary and loyal to Scarlett's family. Problems caused by slavery are not addressed in the classic.