What Happens When You Eat Green Mold

On which foods mold is dangerous

Mold on food is not only unsavory, it can also be hazardous to health. Only with a few foods is it sufficient to cut away the mold. Most of them belong in the trash. Nevertheless, a third of Austrians take the problem lightly.

Green dust on the lemon, white fluff on the parmesan, discoloration in the yogurt - mold can form quickly. It is therefore worthwhile to take a closer look at food before consumption.

Bread, nuts, figs in the trash

"It is tricky that mold often permeates the entire food, even if only a small stain is visible," says Ingrid Kiefer from the Austrian Food Safety Agency (AGES). There are innumerable types of mold: Completely harmless ones like the cultivated mold on Camembert, but also many that form poisons that are dangerous to humans. According to AGES, almost all mold toxins damage the liver, kidneys and genetic material and can cause liver cancer. 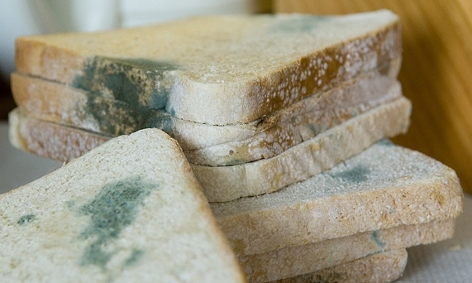 Be careful with moldy bread, nuts and dried figs

Dangerous mold toxins are particularly easy to form in nuts, pistachios, dried figs and cereals. These cannot be destroyed by heat either. Therefore moldy food should not be overcooked. “In bread, mold very often grows through the whole bread. That should definitely be given away, ”says nutritionist Kiefer. Even toast, where only one slice is moldy, belongs in the trash.

It is annoying if, after shopping, it turns out that an orange in the network is already moldy or if there is a lemon with white-green fur in the refrigerator. Is it enough to wash off the other fruits or do they have to be thrown away as well? Or should the entire contents of the refrigerator be disposed of? “You don't have to throw everything away. All you have to do is clear out the refrigerator, clean it thoroughly, throw away the moldy products and check the others, ”says Kiefer. 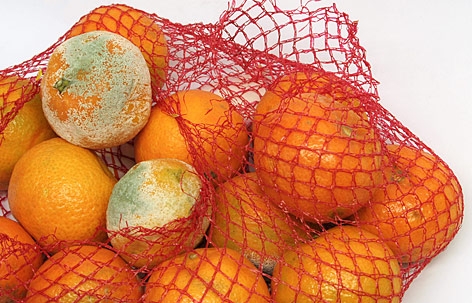 Strawberries and raspberries in the plastic bowl also spoil easily. If only one berry is moldy, the ones directly next to it should also be removed. Peppers with moldy stems belong in the trash as well as moldy cucumbers, jams and yoghurt. "Look, taste, smell and as soon as something is clumped, has a musty smell or changes in color - put it away," says the AGES expert.

Cut away mold from Parmesan

Mold loves moisture. The molds thrive in the spice rack above the stove, as well as in the unopened plastic packaging of lettuce, vegetables and fruit. The green lawn also grows in the cold, freezing is of no use against the toxins that are formed in the process.

Drought, however, slows down fungal growth. Foods that are low in water themselves, such as hard cheese and whole bacon, are less susceptible. The mold doesn't grow far into there either. That's why you can cut the mold away from parmesan and bacon, at least one or two centimeters away from the green spot, according to the expert. But you should make sure that fungal spores are not transferred to other foods with a knife. 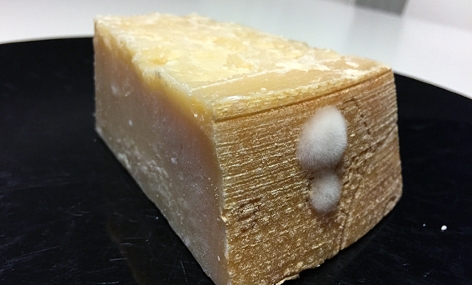 If in doubt, it is better to throw away moldy things

AGES expert Kiefer advises only buying as much as necessary and adhering to the basic principles of kitchen hygiene. This includes keeping the refrigerator clean, choosing the right temperature and not leaving the refrigerator door open unnecessarily long so that no condensation occurs. Food that is sealed in plastic film should be taken out of the packaging, as condensation will also form there. An already dirty refrigerator can be cleaned with water, dishwashing detergent and a little vinegar.

In the retail sector, the official food authorities and the companies themselves check whether the goods are in perfect condition. According to AGES, there are seldom recalls due to dangerous fungal toxins. Ingrid Kiefer is worried about private households because the risk is still underestimated here. "More than a third of the Austrian population is not even aware of the problem here," said the expert. Interestingly, women are more aware than men. According to the AGES risk barometer, Austrians are more worried about hormones in food and incorrect information on food packaging than about mold.

More on the subject: