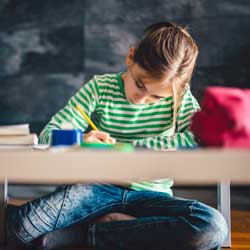 When learning a foreign language, students are confronted with completely new challenges. In addition to the basics of grammar, every language has its peculiarities and subtleties that can represent potential stumbling blocks. But how does foreign language acquisition work if there is already a learning disability in the mother tongue?

In this article, we will look at the difficulties that children with reading and writing difficulties can face when acquiring a foreign language. We show these potential learning problems using English as an example. 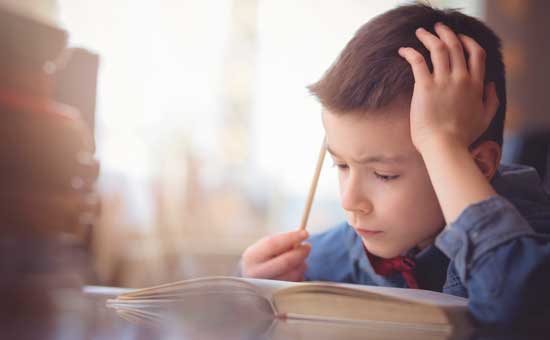 For many children, foreign language lessons begin no later than after the end of primary school. The basics of the written language have already been taught at this point, but learning another language poses new challenges. Understanding and applying the structure and internal logic of a language is difficult for many students.

In children with LRS, however, these problems are much more severe and protracted in many cases. Since they only have one in their mother tongue poor phonological awareness and a poor linguistic memory they face the same problems in language learning.

European languages ​​are counted among the so-called alphabetical languages. This means that the sounds of a word are represented by letters. Some languages ​​are more faithful to the sound (e.g. Spanish and Italian), others have one large variance in the assignment of sounds and letters on (e.g. English and French). In this case, pronunciation and writing differ significantly from one another. Children with LRS can hardly hear different sounds (phonemes) and assign them to the corresponding written form (graphemes). In the case of languages ​​that are not true to the sound, the difficulties arise accordingly. The discrepancies between the sound and image of a word also make it difficult to internalize vocabulary.

Every foreign language makes different demands on a child with LRS. Affected children are typically confronted with the following problems:

Frequent mistakes and the resulting poor performance ensure that affected children lose motivation or feel increasingly stressed. Fundamental doubts about one's own abilities can make the learning process even more difficult. It is therefore important to support children with LRS in foreign language lessons as well. In this way, the vicious circle of pressure to perform, failure and self-doubt can be broken.

Is there a "foreign language dyslexia"?

Dyslexia or LRS is used when the reading and writing skills of a child are in discrepancy with intelligence and general performance potential. Affected children mix up letters, have problems with hyphenation and find it difficult to see the boundaries of words. The same difficulties often arise when learning a foreign language for children with dyslexia. There are also problems that are becoming increasingly important when learning a foreign language: The Differentiation of different, similar sounding sounds and their assignment to letters is difficult for them. Sounds that also exist in their mother tongue are often written differently in foreign languages. When learning vocabulary, they have difficulty associating the pronunciation with the written word, especially when they are very different from each other. Their learning disabilities make it difficult for them to memorize (source: Bundesverband Dyslexia & Dyscalculia e.V.)

In many cases, difficulties in a foreign language only become apparent when the lessons focus intensively on the written language. A Discrepancy between oral skills and their application in the written field becomes clear. If these problems are recognized in foreign language teaching, the term “foreign language dyslexia” is often used. However, experts agree that this is the case not an isolated disorder acts. Rather, it should be emphasized that the child is affected by general LRS symptoms that emerge in foreign language lessons.

How can you recognize an LRS when learning a foreign language?

For example, not every case of “English weakness” is associated with a learning disorder such as dyslexia. Often children initially lack access to and regular contact with the target language. However, if a child's reading and spelling skills are clearly poor, given their age and general intelligence, and the difficulties persist over a long period of time, then dyslexia is suspected.

So how can you explain that children do not seem to have any difficulties in German lessons and that the problems begin when they start foreign language lessons? Particularly in elementary school age, some affected children still manage to do this Compensation for their reading and spelling problems: For example, if possible, use the same easy words that you have memorized for word problems. These strategies can no longer be used in a foreign language.

The difficulties in the foreign language can Reinforce problems with the mother tongue, because the children have to make an effort to distinguish and internalize often contradicting grammar and spelling rules. At this point, the existing LRS symptoms become more visible. Undetected deficits in reading and writing skills in German should be clarified with a scientific LRS test.

The opposite case is also conceivable: some children do not show any clear problems in foreign language lessons, although they are affected by LRS. If learning therapy followed after the original LRS diagnosis, the child had the opportunity to develop his or her language skills in the meantime. In general, more favorable conditions in foreign language teaching can also promote language acquisition: These include effective learning methods, structured lesson plans, regular lessons without a lot of downtime or teacher changes. 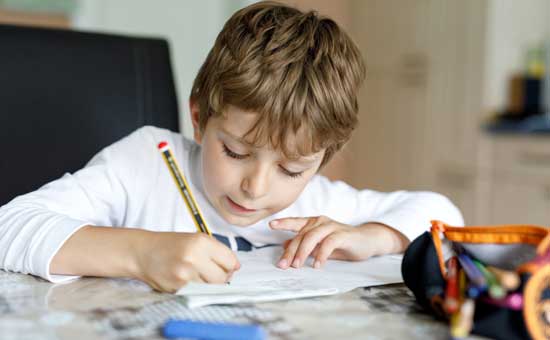 Difficulties in acquiring the English language are not uncommon. For many children, it is initially a challenge to internalize the grammar rules that differ from German or to master the subtleties of pronunciation.

The oral use of the language children with LRS are usually more successful than writing them down. As soon as written language is increasingly taught, noticeable problems arise with spelling and reading comprehension. You cannot hear small differences in pronunciation; they are easily overlooked in the written word.

The following mistakes are therefore common in English lessons:

Many learning processes, such as vocabulary repetition, build on the children's reading and writing skills. Has the child Difficulty in hyphenating or distinguishing sounds in the mother tongue, these problems are usually transferred to the foreign language.

The English language is less faithful to the sound than German, which creates the following obstacles:

Affected children have problems memorizing words and sentences correctly. Written revision tasks are also more of a challenge for them. Increased reading errors naturally lead to the fact that the children cannot grasp the meaning of a word or text or cannot translate it correctly. If you have poor reading skills children usually fail to make sense of vocabulary from context. As a result, homework can often take a long time to complete. Despite intensive exercises, the children still have difficulty memorizing what they have learned.

Tutoring and LRS learning therapies can help with special exercises to overcome the hurdles in learning a foreign language. Thus can Frustration and stress are avoided, feelings of fear are inhibited and your child's self-confidence is increased. Promoting the learning process also guarantees that your child will have basic foreign language skills in later life.

Ideally, foreign language lessons only begin when the problems in the mother tongue have already been corrected. Since this is not possible in every case, other measures can be taken to reduce the To facilitate foreign language learning:

In general, more time should be planned for exercises. Frequent repetitions are important to consolidate language skills, but at the same time the child should not be overwhelmed. You should give praise regularly and also when making small progress. This will increase your child's self-confidence and prevent them from associating setbacks and frustration with the foreign language.