Orthoclase (also Orthoclas) is a very common mineral from the group of feldspars and the mineral class of silicates. It crystallizes in the monoclinic crystal system with the chemical formula K [AlSi3O8] and develops either prismatic to tabular crystals or granular to massive aggregates in different colors depending on the variety: white, gray, yellow, red and brown. Colorless orthoclases are also known.

Orthoklas was named in 1823 by August Breithaupt, who named the mineral based on its good to perfect cleavage at right angles after the Greek words ὀρθός orthos for "straight" or "right" and λάσις class named for "break".

Already in the meanwhile outdated, but still in use 8th edition of the mineral classification according to Strunz, the orthoclase belonged to the mineral class of "silicates and germanates" and there to the department of "tectosilicates", where it belongs together with buddingtonite, celsian, hyalophane, kokchetavite , Mikroklin, Paracelsian, Rubiklin, Sanidin and Slawsonite the independent "Feldspar group (Buddingtonite-Orthoclase-Slawsonite series)" with the system no. VIII / J.06 formed.

The 9th edition of Strunz's mineral systematics, which has been in effect since 2001 and is used by the International Mineralogical Association (IMA), also assigns the orthoclase to the class of “silicates and germanates” and there to the “tectosilicates” section without zeolitic H2O “a. However, this section is further subdivided according to the possible presence of further anions, so that the mineral can be found according to its composition in the sub-section “Tectosilicates without further anions”, where it is found together with adulara, anorthoclase, buddingtonite, celsian, hyalophane, Kokchetavit, Mikroklin, Monalbit, Rubiklin and Sanidin the feldspar group with the system no. 9.FA.30 forms.

The systematics of minerals according to Dana, which is mainly used in the English-speaking world, assigns the orthoclase to the class of "silicates and germanates" and there in the department of "structural silicates: Al-Si lattice". Here he is together with Anorthoklas, Celsian, Filatovit, Hyalophan, Mikroklin, Rubiklin and Sanidin in the group of "K (Na, Ba) -Feldspars" with the system no. 76.01.01 to be found in the subsection "With Al-Si grid". 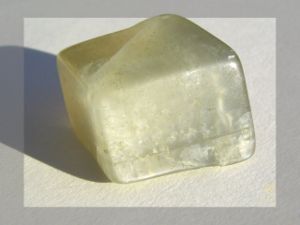 Orthoclase is a typical rock-forming mineral and forms either igneously in granite, pegmatite, rhyolite, syenite and trachyte or metamorphically in orthogneiss, migmatite and others.

Locations include Hagendorf in Germany, Elba in Italy, Itrongay in Madagascar, Strzegom in Poland, Loket and Karlovy Vary in the Czech Republic, California and South Dakota in the USA.

Orthoclase is used in the glass, ceramic and pharmaceutical industries. The moonstone variety is used as a gemstone.