If you want to escape the whole Bangalore chaos for a weekend, the best place to go is Mysore. Mysore is actually called Mysore and is about 150 kilometers from Bangalore. Still, it takes three hours to drive because the roads in India are a disaster. There are certainly nicer places in Karnataka. But Mysore is easy to get to and somehow perfect for a relaxing weekend getaway. In this article I will show you the most beautiful Mysore sights and all the highlights.

Advertising note: All links marked with an asterisk * in this post are affiliate links. If you buy or book something through my affiliate link, I will receive a small commission. But nothing changes for you and there are no fees or the like.

Most people come to Mysore for the Amba Vilas Palace, better known as the Maharaja's Palace. The Amba Vilas is one of the most famous palace buildings in India. It used to be the residence of the Majarajas in the former princely state of Mysore. Today only a few of their descendants live in part of the palace.

The Amba Vilas combines Hindu, Indian-Islamic, Rajput and European architecture. It's ridiculously cluttered with marble and mosaic floors, gold leaf, pillars, expensive antiques, and carved wooden doors. Definitely worth going to Mysore on the weekend. Because the palace facade is illuminated every Sunday evening from 7:00 p.m. to 8:00 p.m. and every second Saturday from 7:00 p.m. to 7:20 p.m. with over 80,000 lightbulbs.

You can find beautiful and affordable accommodations in Bangalore on Booking.com. *

Fancy an Airbnb? Here I am giving you 25 euros on your first booking. *

You can compare the current flight prices to India at Skyscanner *. 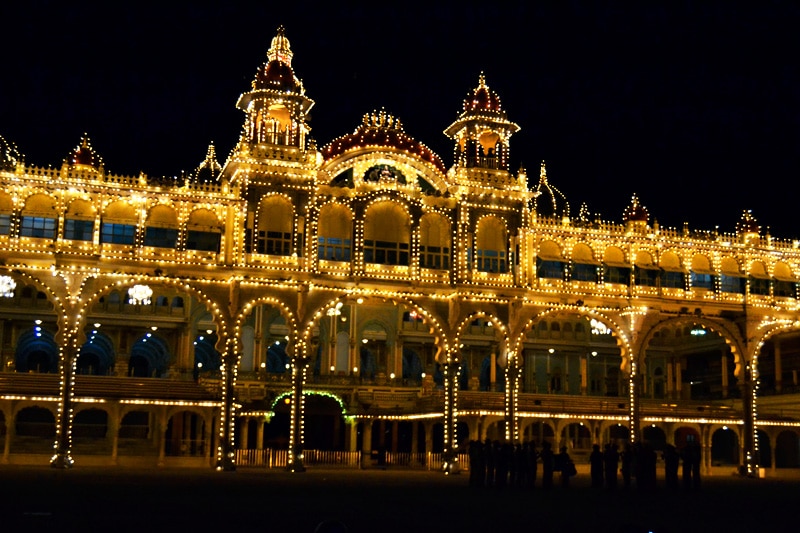 An ugly zoo, lots of temples and an adorable bull

Otherwise, there isn't too much to see in Mysore. The zoo is quite famous, but a rather sad spectacle in my opinion. The area itself is very beautiful and well maintained by Indian standards. Unfortunately, the animals are not treated really well and some of them were obviously sick or injured - but nobody really cared about that. So my recommendation: it would be better not to go there.

There are some really nice temples in Mysore for that. About three kilometers southeast of the city center, on the Chamundi Hills, you will find, for example, the Chamundeshwari Temple. The Hindu temple was built in the 12th century and is one of the most beautiful Mysore sights. Most likely from the rulers of the Hoysala Empire, but nobody really knows. The temple itself is not that spectacular, but the hustle and bustle in the market square is. There are tons of thieving monkeys, delicious food, a lot to shop and a few cows standing around happy.

Here * you can compare and book exciting excursions and tours in Mysore. 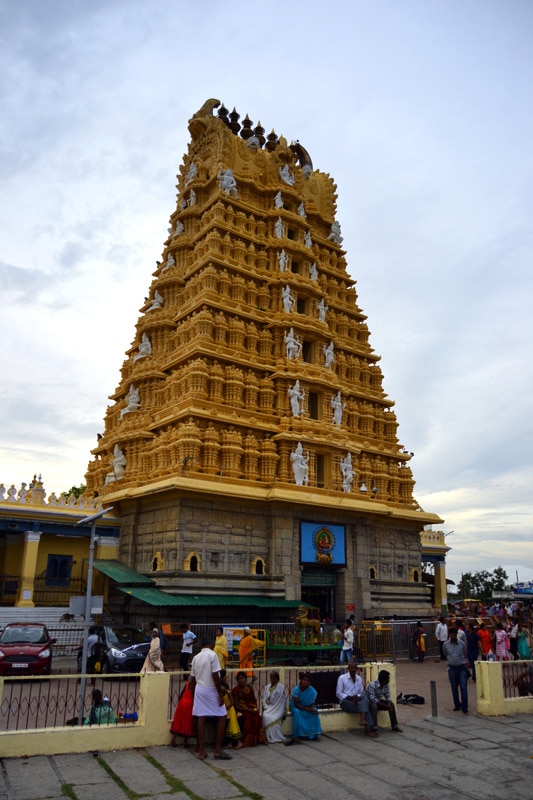 I love how the monkeys do gymnastics on the temple 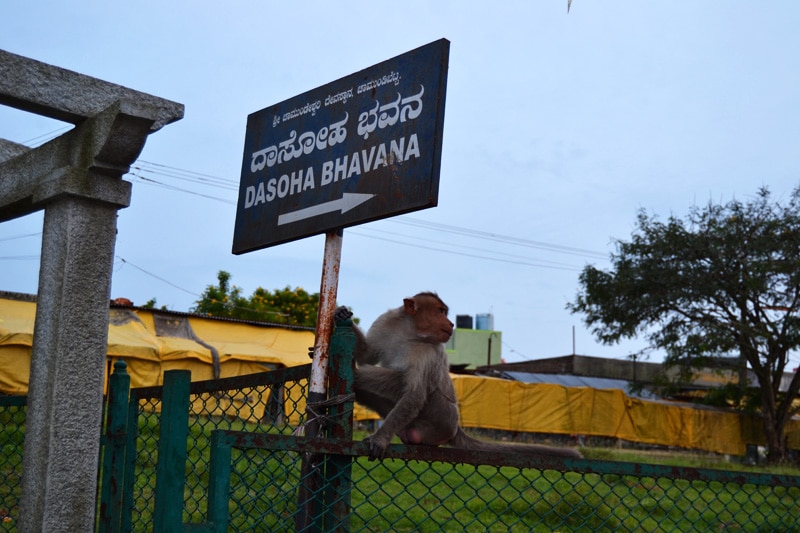 The monkeys here are also rather thieving, but not nearly as bad as in Bali

But my favorite is the bull named Nandi, which is just a few minutes from Chamundeshwari Temple. Nandi is the “gatekeeper” of Shiva and Parvati. If you have a particularly big wish, you have to whisper it in Nandi's ear and it will come true. 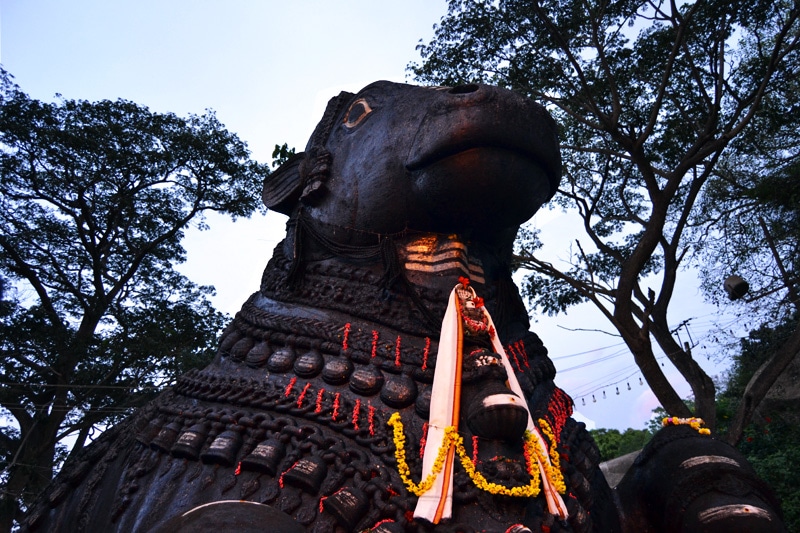 So many wishes ... I texted Nandi for about half an hour

Otherwise you should just drift in Mysore and enjoy the relaxed small town atmosphere. There are an incredible number of small markets and restaurants - there is almost no nightlife. An absolute highlight for me were the locals in Mysore, who gave us foreigners an incredibly friendly, curious and warm welcome. I've already met a lot of nice people here in India, but the small town of Karnataka has been way ahead so far.

Here * you can compare and book exciting excursions and tours in Mysore. 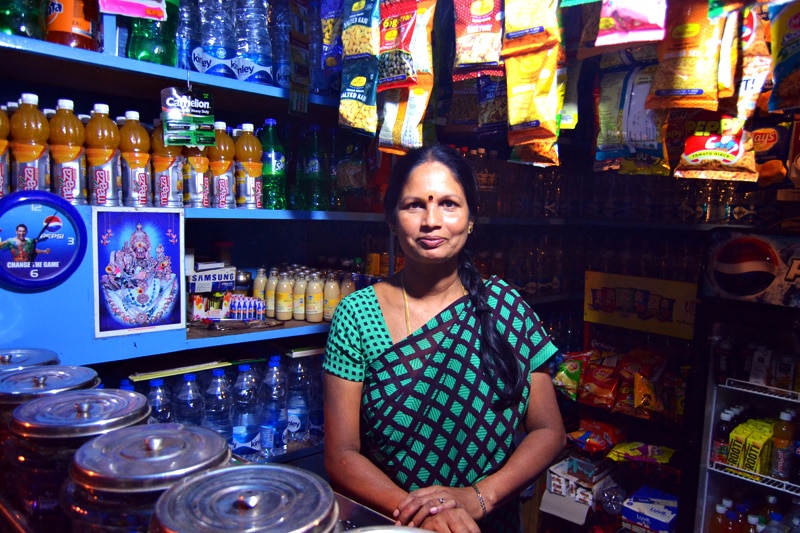 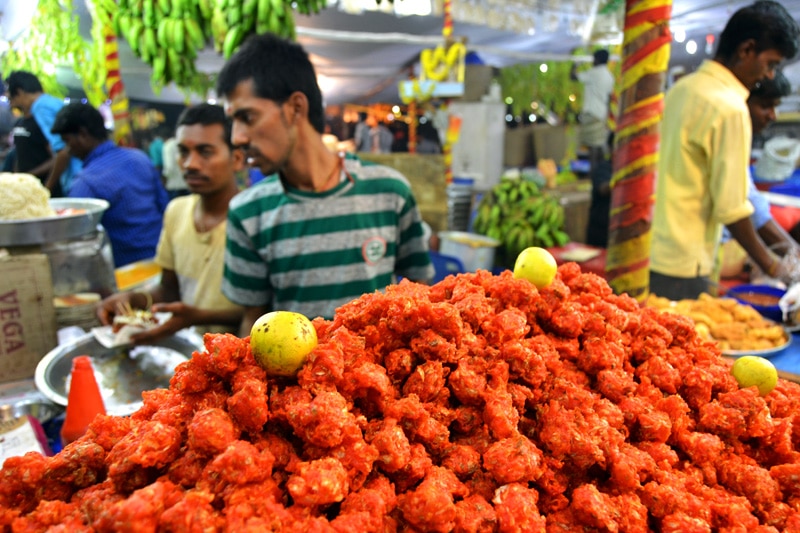 Delicious street food in Mysore. By the way, these are vegetables 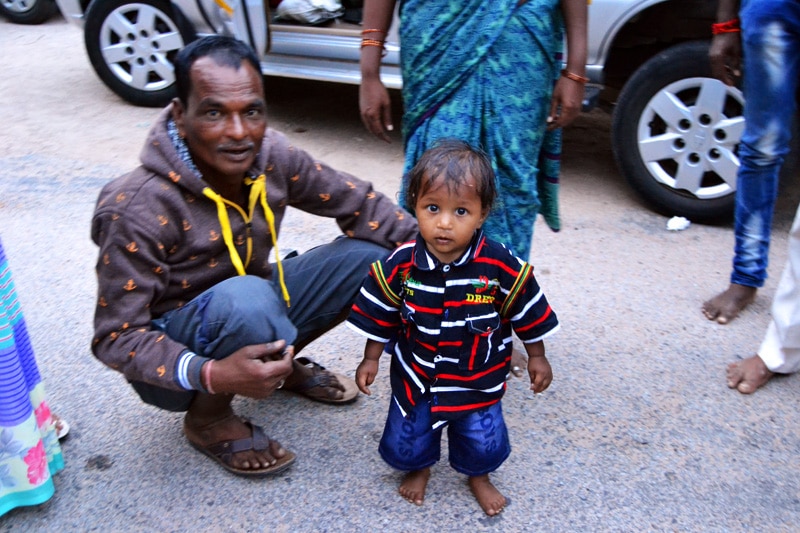 So sweet! The kids like to be held in front of the camera here

Getting there: By bus from Bangalore to Mysore

We took the bus from Bangalore to Mysore. The “Luxury Bus” with air conditioning and comfortable, foldable seats costs about 600 rupees (about 8.50 euros) there and back. It takes about three hours and is relatively reliable. If you want to book online, you will need an Indian credit card from most providers.

A good alternative is Redbus, for example. Here you can simply call and book the tickets over the phone. The vouchers will then be delivered to your accommodation the next day and paid for in cash at the supplier. But under no circumstances take the cheapest provider and take a look at the reviews of other passengers on Makemytrip or Redbus. Because in a rickety bus without air conditioning, a trip to India can quickly become a nightmare.

You can find beautiful and affordable accommodations in Bangalore on Booking.com. *

Fancy an Airbnb? Here I am giving you 25 euros on your first booking. *

You can compare the current flight prices to India at Skyscanner *. 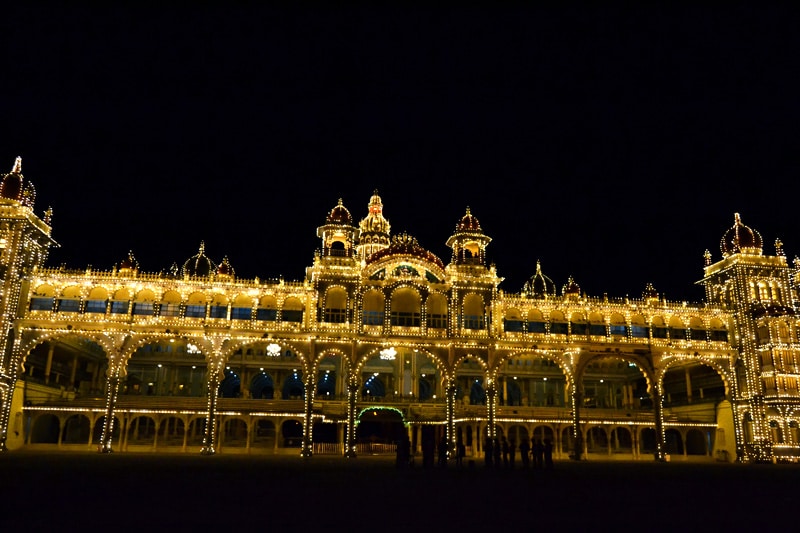