Was Trump in a homeless shelter 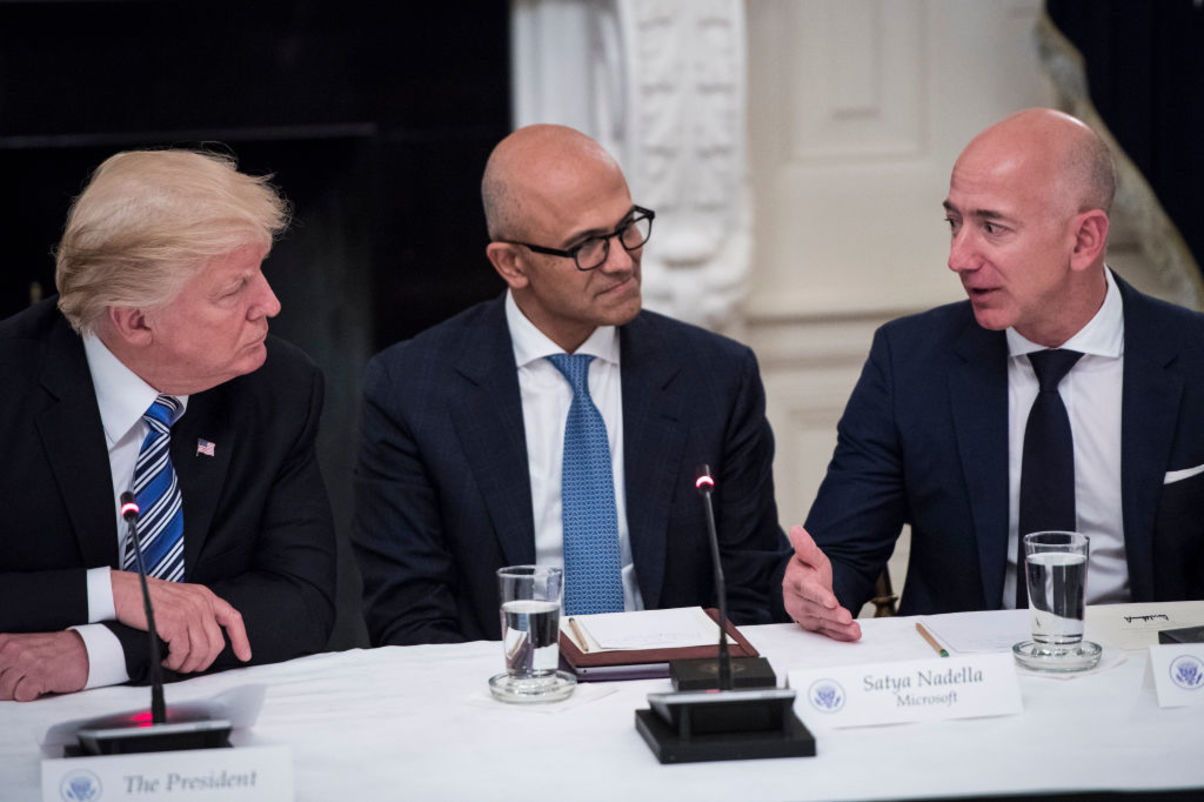 Does this picture already reveal how US President Trump (left) thinks of Jeff Bezos (right)? Microsoft boss Satya Nadella was already sitting there “between the chairs”.

Good Morning! While you were sleeping, work on the digital scene went on elsewhere.

Amazon wants US President Donald Trump to testify under oath. This was preceded by the fact that Amazon received a lucrative military contract from Microsoft has been gouged out. Over ten billion US dollars have been lost to the company. But Amazon boss Jeff Bezos does not believe that Microsoft won the Pentagon's cloud computing project in a completely fair way.

That's why Amazon later sued and gave the reason: US President Donald Trump would have interfered and his prejudice against Amazon and its boss Jeff Bezos would have damaged the company's chances of winning the contract. If it goes to Amazon, Trump should now clarify the conspiracy allegations under oath. [More at Handelsblatt and CNBC]

OnStart-up scene: Steffi Metz is Entrepreneur of the Year. But once she was on the verge of losing everything. In the Gründerszene podcast, she tells us how a pregnancy with complications drove her company into bankruptcy - and even so far that she was offered a place in a homeless shelter. [More at Gründerszene]

And here are the other headlines of the night:

Slacks share has been on a roller coaster ride. After the news site "Business Insider" had reported that in the future all 350,000 employees of the US computer company IBM to use Slack's team software for communication, the stock soared. Then their trading was stopped and not resumed until the closing bell. In after-hours trading, it fell by eight percent after Slack took a position and made it clear that IBM had been a big customer for years and had increased the number of users of the app during this time. [More at Techcrunch and Financial News]

Weworks CEO Marcelo Claure has denied in an interview that Adam Neumann, the company's former CEO, received more than $ 1 billion to leave the broker. It had been rumored that Softbank had offered him up to $ 970 million on his stock, an advisory fee of $ 185 million, and a $ 500 million loan to repay his debt. [More at CNBC]

The printer manufacturer Xerox has its offer, the computer and printer manufacturer HP to take over, increased to $ 24 per share, or approximately $ 34 billion total. In November, Xerox had offered $ 22 per share in its takeover bid. HP's board of directors had unanimously rejected this proposal, arguing that the offer undervalued HP and was not in the best interests of shareholders. [More at the Wall Street Journal]

Theranos-Founder Elizabeth Holmes and her lawyers are betting that the eleven-point indictment against them will be dropped. Holmes is accused of cheating on investors and lying to customers about her medical testing startup, which was valued at $ 9 billion before the collapse. Her lawyers argue, among other things, that the charges are too vague. [More at Bloomberg]

SpaceX comes very close to his goal of flying real astronauts aboard his spaceship Crew Dragon. After a successful demolition test in January, it basically passed all of the major milestones needed before people were transported. According to a media report, the mission is now planned for May 7th. [More at Techcrunch]

Tesla apparently works on several installations of his solar roofs in the San Francisco Bay region. An expansion of the product to Europe and China is also planned, as CEO Elon Musk announced in a series of tweets. [More at Techcrunch]

Our reading tip on the start-up scene: The Berlin online shop for sleeping furniture Bruno has a new owner: the Baden-Württemberg brand Ruf Betten. Co-founder wants to discuss the purchase price Felix Baer do not express. Bruno was profitable and was built up without outside capital. [More at Gründerszene]

Have a nice tuesday!