Who earns how much in IT?

They are regarded as solitary masterminds who prefer to sit in front of the computer and solve equations than go to parties. Types who can speak several programming languages, but are not able to have a normal everyday conversation. And of course never got a girl.

Nerds are on the rise, however, because the lack of experts is causing the IT industry to tremble. Even career changers are said to have good opportunities. And the salaries are also impressive, as a current infographic from Salary.de shows. However, not all IT activities are paid equally well.

A look at an average German system house shows that top earners are managing directors with around 168,000 euros. Becoming a boss is worthwhile: Anyone who takes on a managerial position can look forward to a substantial increase in salary. Performance positions and sought-after qualifications are still paid well above average. But bosses also have more responsibility and usually work more. Personnel responsibility is also noticeable in the salary of an IT manager: it comes to an average of around 111,000 euros per year. 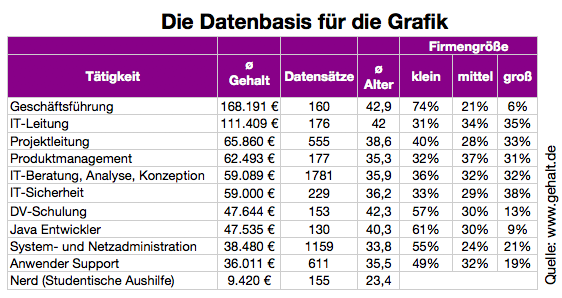 These are all average earnings, because factors such as company size, industry or region still play a role. When it comes to company size, the following rule of thumb applies: the larger the company, the higher the remuneration.

The situation is similar with the regional differences. Munich (15.9 percent above average) has the highest salaries, followed by Frankfurt am Main (14.5 percent). In other parts of Germany, salaries are significantly lower than the national average.

The industry in which someone works is also decisive: This shows that IT specialists at banks and financial service providers, in the energy industry, at consulting companies and in the automotive industry earn above-average earnings. Other sectors such as advertising, media, public administration, authorities, health care or wholesale, on the other hand, pay significantly worse.

So there are good prospects for IT specialists, because they are in short supply on the German job market. The IT industry is booming. Those who have the required qualifications have the best career prospects and can earn above-average earnings.

Salary calculator for the IT sector

Do you work in IT and are currently in acute salary negotiations with your company and don't really know how much more salary you can ask for? In the IT sector, there has been a desperate need for qualified personnel for a number of years. The need for IT people will grow steadily, so you already have good arguments for a successful salary negotiation. If you want to know exactly how much gross you can ask for more, so that you can then find out how much net you get out, we recommend our new gross-net calculator. This calculator is helpful for the real salary increase. Just try it !

Salary in an advertising agency