Green slime means you are sick

When should I see a doctor if I have a cough?

Coughing is usually annoying and often tedious. But it is rarely dangerous. A specialist in pulmonology explains how you can tell that a doctor's visit is advisable. 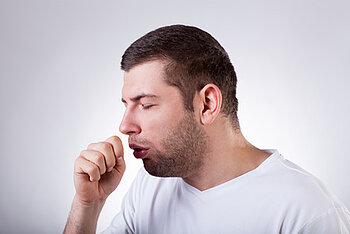 In the middle of a classical concert, in church or at night in your sleep: somehow cough always comes at the wrong time. But why is that actually the case? And is it true that the color of the sputum allows conclusions to be drawn about the cause of the cough? The lung specialist Kai-Michael Beeh, who has just written a book about his favorite organ (title: The breathtaking world of the lungs), answers these questions in an interview with the German Press Agency (dpa). Privatdozent Dr. med. Kai-Michael Beeh is an internist and pulmonologist. In 2004 he founded the Institute for Respiratory Research (insaf) in Wiesbaden.

Question: Why do so many people have to cough at concerts?

Answer: Many people feel that they are being watched, mostly the air is dry and the atmosphere is tense. That makes people nervous. When we are nervous, part of our nervous system is activated - the escape reflexes. Only: we cannot escape. So we cannot physically relieve nervousness. So what does the body do? It upregulates the opposite nervous system, the braking system. While one dries out the mucous membranes, the other causes increased saliva production and irritates the bronchi. The cough sensors
These are sensors (receptors) in the mucous membrane that recognize foreign substances in the mucus and trigger a cough. Cough sensors are not only located in the windpipe and bronchi, but also in the nose, ear canal, stomach and even in the heart.
in the bronchi are so "sharpened". At some point you can't do anything else - and you have to cough.

And how do you get this urge to cough under control?

He cannot be suppressed while sitting. Movement helps. So if in doubt, just get out of the hall and walk around a bit.

When is a cough a case for the doctor?

Coughing as part of a cold is not dangerous in otherwise healthy people. This usually goes away after three or four weeks. If it takes longer than four weeks, you should see a doctor.

Is that true: green sputum is bacterial, yellow is viral?

Sputum is a bit telltale. At the top of the harmlessness scale is clear sputum. There shouldn't be any bacterial infection. Yellow is used for allergic asthma or colds. It is a myth that green sputum is always bacterial and must be treated with antibiotics.

Colds are usually caused by viruses - and everyone knows that in the end, the mucus from the nose can get tough and green. The green color is caused by white blood cells that die when inflammation heals. Green sputum is only of concern if it persists for more than a few days and is accompanied by a fever or chest pain. Bloody sputum must always be clarified. Usually this is harmless too, but it can also hide serious illnesses.

The best is of course no sputum at all. But how do you manage not to catch a cold in the transition period?

Stay calm. This compulsive “I mustn't get sick” usually leads to stress that we become more susceptible to infections. If you want to protect yourself, you should wash your hands regularly with soap. Cold viruses are usually transmitted by shaking hands or touching door handles. Eating a balanced and healthy diet also helps. And go out into the light regularly, vitamin D, vitamin D.
Vitamin D is the preliminary stage (provitamin) for a number of hormones that have a major influence on the calcium balance. The human body can produce this provitamin itself from cholesterol. The prerequisite for this is that the skin is sufficiently exposed to sunlight (UV light). If this is not the case, vitamin D must be taken in through food or supplementary preparations.
Vitamin D3 = Calcitrol - i.e. the vitamin D form that the body can use directly.

refuel. This is also for the immune system
The body's defense system consists of three functional circles:
(1) Bone marrow as a site for the formation of immune cells.
(2) Various central immune organs such as thymus (imprinting T lymphocytes) and lymphatic organs near the gut (for imprinting B lymphocytes).
(3) Secondary lymphatic organs such as the spleen, lymph nodes and tonsils (tonsils).
A distinction is made between the so-called humoral defense (via the body fluids containing antibodies and factors from the so-called complement system) and the cell-mediated defense (with B and T cells, macrophages, antigen-presenting cells, granulocytes, etc.).
important, as well as exercise, for example regular walks.

And very important: a positive attitude! According to a study, people with a life-affirming attitude are less likely to catch colds.