Unfortunately, lateral thinkers often have a hard time. They are seen as troublemakers, outsiders, deviants. Anyone who does not follow the same path of thought as everyone else will encounter incomprehension or rejection. It's a shame, because lateral thinkers are extraordinary and particularly important types of thinkers - and necessary for progress. They bring a breath of fresh air, bring about innovations and changes on paths that others do not see. What makes a lateral thinker, what advantages they bring and tips with which you can become a lateral thinker yourself ... 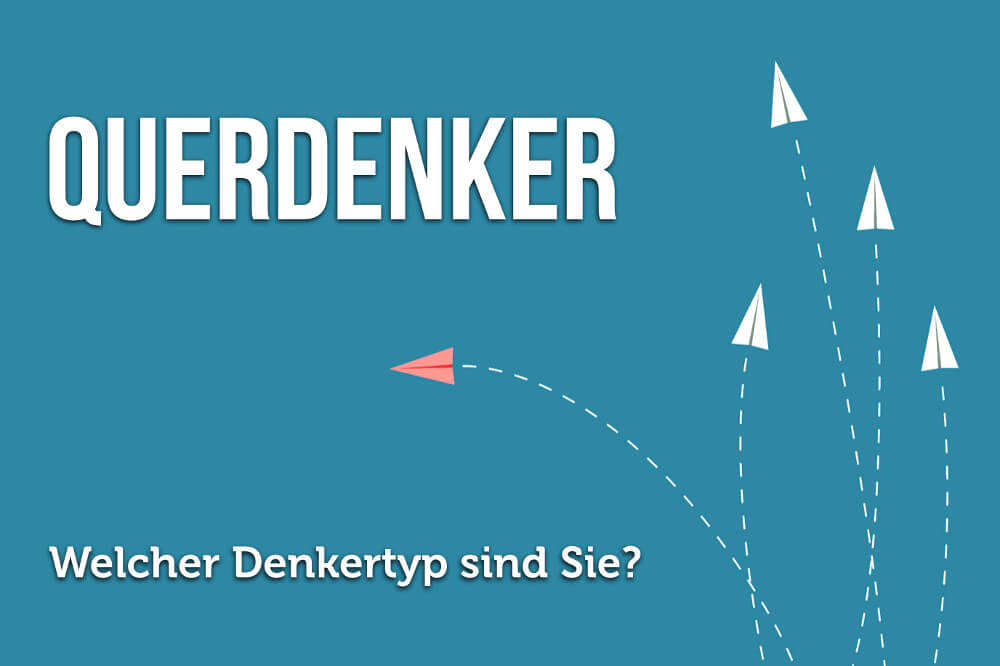 What makes a lateral thinker?

The term lateral thinker is used derogatory or almost insulting. “This is a typical lateral thinker…” However, lateral thinking in itself has nothing negative at all and is also not judgmental. Rather, lateral thinkers are people who pursue a different approach that deviates from classic, conventional ways. You don't take the familiar, straight route, but think outside the box and proceed in an unconventional manner.

Unconventional thinkers embark on intellectual paths that are completely new territory and see problems or issues from a completely new perspective. Since others cannot always understand these approaches, they are belittled from the outside. What does not correspond to the majority thinking is criticized or dismissed as nonsense. If you like to think outside the box, you will have to face some headwinds. Otherwise the extraordinary ideas fizzle out and give way to conformity.

The power of lateral thinkers

In an experiment, the psychologist Solomon Asch had test subjects determine the length of three rods. One simple thing: the longest stick could be identified with the naked eye. The group, however, was manipulated: except for one participant, all of them were informed and named the wrong, short stick. Most of the real subjects then followed the majority decision and peer pressure even though they knew it was wrong. So far not surprising.

However, this does not mean that minorities are powerless. When the experiment was continued, only two participants were privy to it. These banded together and argued vehemently for the shorter staff. So the duo was actually able to convince others. The insight behind it: Few lateral thinkers can compensate for being outnumbered. The decisive factor for the power of the minorities was that they spoke with one voice throughout and that this voice was particularly powerful. Or to put it another way: The majority must have the impression that the lateral thinker is extremely sure of his cause. Then she is quite ready to question herself.

Simply wiping the ideas of a lateral thinker off the table is a big mistake anyway. Much more applies: Every team needs an extraordinary thinker - precisely because he sees things differently than the average. There are several advantages and good reasons in favor of lateral thinkers:

A parable about lateral thinking

A woman goes into a New York bank. She says she wants to go to Europe for a week tomorrow and that she urgently needs a $ 5,000 loan. “Well,” says the bank manager, “we'll be happy to do that, but what security do you offer us for it?” The blonde then points to a brand new Rolls-Royce that is parked outside on the street and has the papers and keys with her. “Of course that's okay,” says the bank manager. After all, the value of the Rolls-Royce far exceeds the credit line. A bank employee takes the car keys and parks the Rolls-Royce in the bank's underground car park. Then the woman gets the money and goes away.

After a week she returns in a good mood and visibly refreshed. She first hands the bank manager the $ 5,000 in cash and finally the interest of around $ 15.

“You know,” says the manager, “we are really pleased that this deal went off so well. But what really bothered us last week: What did you need $ 5,000 for? We did a little bit of research about you and found out that you are a multimillionaire and you don't have to borrow the money at all. "

“That's right,” says the woman. “But you know, I did some research too. And there is nowhere else in New York where you can safely park your car for $ 15 for a week. "

There are many different types of thinkers:

The last type - the status quo thinker - may need some explanation. These guys are perhaps less known by the name, more like pigeonhole thinkers. And they make an amazingly large group. Often these are very thorough and conscientious colleagues. Good observer. Strong opinion analysts. Experienced lover of logic. That makes them very influential, but also dangerous. Status quo thinkers carefully and conscientiously cultivate their own prejudices, clichés and thought drawers> into which they force others or they gossip until they fit in there.

In addition to the different types of thinkers, the way people think can also be divided into other categories: A distinction is made between the so-called convergent thinkers and the divergent thinkers.

Most people are. It is typical of these types of thinkers that they only see a limited number of options for their decisions. Often there are only two: either - or. Either we do it that way - or we don't do it at all. Either I get the job - or I'm a loser. Either victory - or defeat. They are yes-or-no thinkers who like to categorically exclude everything else.

Not that divergent thinkers always have more options, but they always look for them and usually they find them. There are always alternatives for them. This can even mean that for them the shortest connection between two points is the crooked one. You are open to alternatives, unimagined solutions and compromises.

Even the definition shows that it doesn't sound too flattering to be a convergent thinker. It sounds more like a narrow forehead with a penchant for black and white painting. Lateral thinkers and divergent thinkers, on the other hand, manage to look beyond apparently limited alternatives. Suddenly, completely new possibilities arise. Where others are restricted, lateral thinkers are free to choose.

Tips: How to become a lateral thinker

Some people are born lateral thinkers, they always think outside the box, their ideas don't fit into the typical drawers and their approaches always go against the current. Others find it extremely difficult. If you belong to the second group, we have a few tips that can make you a lateral thinker:

In addition to these tips, various methods can also help you think outside the box. Three examples are:

With the headstand method, you turn an existing question around and force other trains of thought. Instead of asking: "How do we increase sales?", Start with the question "How do we make a loss in any case?" Then collect as many ideas and ideas as possible - which in the end are reversed into the opposite. In this way, you will come across suggested solutions that would otherwise have remained hidden.

Related to this is Edward de Bono's provocation method. In order to generate ideas, certain fixed findings are reversed, exaggerated or even canceled. For example, you could assume that there is an unlimited budget available for implementation - and think further from this assumption.

The idea is simple: you are always against it. They provide counter-arguments, question every suggestion, express constructive criticism and stimulate a discussion. This creates numerous new suggestions and arguments instead of choosing the first option.

In addition to these tips and methods, there are some basic requirements that lateral thinkers need. The following properties are particularly important, which is why you should work on them if you want to think outside the box more often: