What are the functions of a gearbox

Gearbox in the car

There is a transmission in every vehicle with an engine. Its job is to absorb the power of the engine and to transfer it further. More precisely, it's the torque. With the help of the transmission, the torque is translated to the wheels. When speaking of a gearbox in a car, the designation includes the gearbox housing first. Inside there are parts and gears that make up the actual transmission in an impressive structure.

What do you need a transmission for? 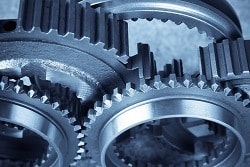 The function of a gearbox is to transmit the torque according to the given requirement. The vehicle's internal combustion engine produces only a relatively weak torque. This is especially the case at low speeds. Gear motors are therefore used in the drive technology of motor vehicles with internal combustion engines. They help to control the engine output as the driver wishes. The transmission connects the engine with the drive train, it adapts torque and power to the required load situation. Every car needs a minimum amount of torque in order to be able to start and accelerate. The gears are also adapted to this performance. The transmission translates so much in first gear that the engine does not die with it and can be accelerated up to around 30 km / h without the engine over-revving.

How does a transmission work

The typical usable speed range is 1500-5500 (diesel) or 1500-8000 tours (petrol engine). Each gear requires a different gear ratio in order to keep the speed in the range in which the engine delivers its optimal performance. In first gear, the main shaft of the gearbox rotates at around 25 percent of the input speed. You can now accelerate until the car engine has reached the highest possible speed. Now you have to shift into a higher gear. The transmission now converts the power to another area of ​​the higher gear. It can accelerate to a higher speed. On the other hand, you can't start off with this so well or not at all.

For the drive, there are engines with four types of gearbox in the car, with different structures and functions:

Manual gearbox in the car 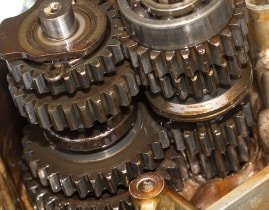 With a manual gearbox, the drive power flows from the engine to the gearbox via a disc clutch. In each gear there is a pair of gears that transmit power to the drive train. The gear ratio of the gear pair determines the speed and torque on the drive axle, the gear is selected by the driver on the gearshift lever.

The classic automated manual transmission has the same mechanical structure as the manual one. Hydraulic or electric actuators operate the clutch and shift, controlled by the shift electronics. It either selects the gear independently or receives the shift command via a rocker switch.

The direct shift transmission is a modern further development with two mechanically independent automatic partial transmissions. Both parts alternately carry the aisles. The control electronics first select the correct gear in the no-load line before the clutch switches to the selected gear without interrupting the train. This geared motor combines the advantage of uninterrupted transmission with the high efficiency of a gear drive. Due to the more complex structure, direct shift transmissions are more expensive to manufacture and maintain.

Stepless automatic transmissions enable stepless speed and torque transmission. The change in ratio is achieved by means of two pairs of conical pulleys, which are connected by a chain or a push link belt.