Android & iOS: These phones get updates the longest 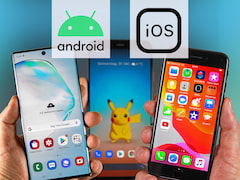 The stars are good that the Galaxy Note 10 (left), Pixel 4 (center) and iPhone SE (2020) will be supplied with updates for a long time
Logos: Apple / Google, Photos / Montage: teltarif.de Anyone who spends a lot of money on a smartphone usually also hopes for long-term support with software updates that deliver bug fixes, improvements and security updates. Many manufacturers now have a transparent update policy so that buying a smartphone no longer has to be a lottery.

We have compiled a list of smartphones that have a good chance of long-term software support. Models that came onto the market from 2019 are taken into account. The background to the forecasts is either official information from the manufacturer (e.g. Samsung) or the past handling of manufacturers with models that are on the market (e.g. Apple). The latter, however, is basically about forecasts on our part that are not set in stone.

The list is not to be seen as a complete, closed construct, update plans of the manufacturers can always change, and new models can be added. With comparatively young manufacturers, smartphones can have good forecasts, but it is not yet possible to precisely define how long models will be supported. As soon as we have the latest information, we will continuously expand and update the list. It starts with "A" for Apple.

The stars are good that the Galaxy Note 10 (left), Pixel 4 (center) and iPhone SE (2020) will be provided with updates for a long time
Logos: Apple / Google, Photos / Montage: teltarif.de The iPhone manufacturer is known for its long-term support for its models. An example of this is the provision of iOS version 12.4.5 for the iPhone 5S earlier this year. At the time, the model was already over six years old. Proceeding from such cases, the prognoses for the current generations are quite high that they will be supported for a long time. So it can be worthwhile - also in terms of price - to take a look at devices from 2018 or even 2017, apart from the models from 2019/2020.

Android 11 has been officially available since the beginning of September. One of the first models to receive an update is Google's Pixel models. Devices from version "2" are supported. The Pixel 2 and Pixel 2 XL are a good three years old. Corresponding forecasts can also be made for the 2019 and 2020 models.

Huawei and thus also the subsidiary Honor may not be delivered with Google services on new devices. Using Android as open source software is not a problem. Huawei is increasingly relying on its own app ecosystem to provide important applications and services. The promise for the future should, among other things, continue to guarantee Android as the operating system and security updates.

It can be assumed that Huawei is very keen to support models such as the P40 series and to make them attractive even without Google services. However, due to the difficult to assess situation, we did not include any specific models in the list. The rumor that Huawei could withdraw completely from the smartphone market was already making the rounds.

LG is also not one of the most transparent candidates when it comes to update schedules. With models like the G8X ThinQ, there are certainly reasons for this because the model is compatible with a second screen. The display has to be adjusted accordingly more complex than with single devices. We have included four models in the list, which one must at least assume that they will receive an update to Android 11 and, in the best case, beyond. Three of the devices listed support the 5G cellular standard. That should be reason enough for you to be awarded longer support.

Nokia published an update schedule for Android 10 a good year ago. We have added models that were introduced this year to the list. They have a good chance of receiving an update to Android 11 as well. Other models from the Nokia warehouse are not excluded. So it is possible that models (e.g. the Nokia 9 PureView) that came onto the market in 2019 can also get hold of the latest Android operating system.

Oppo and realme are among the take-offs in the smartphone market. This year some new models from the manufacturers from China have come onto the market. These devices have a good chance of running on Android 11 and Android 12. In the course of the release of Android 11, Oppo and realme, among others, were named in the same breath with Google, whose selected models can count on the update to the new mobile operating system first. In addition to manufacturers such as OnePlus, early closed beta access for future firmware versions for Oppo cannot be ruled out.

In May of last year, the OnePlus 3 and OnePlus 3T models received the current Android Pie version. The models from 2016 could therefore look forward to long-term support. OnePlus officially promises updates for three years. In addition, the models from the Chinese manufacturer benefit from beta support for new firmware at an early stage. The forecasts for current models are correspondingly good.

Samsung announced in August that selected models will receive updates for a total of three years. The following models from the South Korean manufacturer have a good chance of getting Android 11 as well as Android 12 and, depending on the release, Android 13. Relevant security updates and bug fixes will most likely follow regularly between the major firmware updates.

Sony is a bit quieter than other manufacturers when it comes to the update strategy. We can only speculate about which models will receive firmware updates to newer versions. We have added three models from 2020 to the list. You should be able to assume that there will be at least an upgrade to Android 11 in the future.

The Mi 10 and Mi 10 Pro are among the first to receive the software update immediately since the official release of Android 11. This was preceded by the possibility for Mi-10 (Pro) users to test the closed beta of the Android version. The predictions are good that the two devices will also receive Android 12 and possibly Android 13 as well. Other smartphones from 2019/2020 from the Chinese manufacturer will certainly also receive longer support.

Android 11 has been official since the beginning of September. You can read about the changes in the update in another news item.