Why was you mentioned in a newspaper?

How often do the media name the origin of suspects?

Since Cologne's New Year's Eve 2015/16, the media in Germany have been increasingly accused of hiding or playing down crimes committed by immigrants and refugees. Some editorial offices have therefore switched to naming the origin of suspects more often. The Sächsische Zeitung, for example, decided in 2016 to always mention the nationality of suspects - both for Germans and for foreigners. According to editor-in-chief Uwe Vetterick, this should counteract perceived truths about the crime of refugees. The German Press Agency also announced that it would refer to the origin more often, but more casually and with the aim of avoiding overemphasis on nationality, as dpa editor-in-chief Sven Gösmann explained.

You can find the full expertise here

How is it today, almost four years after Cologne? How often does the origin of suspects appear in the reporting? Macromedia University examined television and newspaper reports from 2019 - and compared them with data from television research from 2014 and 2017. Study author Thomas Hestermann summarizes the results exclusively in an expertise for MEDIENDIENST.

The study shows: in 2019 every third TV report and almost every second newspaper report on violent crime refers to the origin of the suspects. In television coverage, the proportion has almost doubled compared to 2017: At that time, the origin was mentioned in every sixth contribution. It is also interesting to take a look at 2014: Before the New Year's Eve in Cologne, the origin of suspects played practically no role in TV coverage. 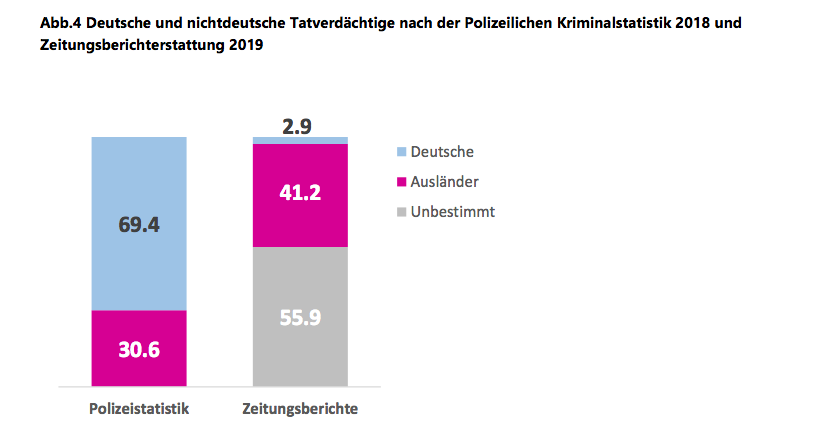 The origin is mentioned above all if the suspects are foreigners. "The reporting completely reverses the police's findings," writes Hestermann. Foreign suspects are mentioned 19 times as often in television reports as their statistical share corresponds to. They are even featured 32 times in newspaper reports. The distortion of the statistical data becomes particularly clear using the example of so-called knife offenses. According to a situation report by the Saarland police, around 70 percent of such crimes can be attributed to Germans: The most common first names of the suspects are Michael, Daniel and Andreas. “On German television, on the other hand, the knifers are called Sayed, Alaa or Ahmad,” writes Hestermann. If it is a question of German violent criminals, the origin is hardly mentioned in any of the television and newspaper reports examined. The main news and tabloid magazines of the eight most watched channels and the federal editions of the high-circulation national daily newspapers were examined.

A look at the entire coverage of current television formats and national newspapers about immigrants and refugees shows, according to Hestermann: "The violent foreigner is a central figure of fear in German journalism." In 2019, every fourth article dealt with alleged violent criminals (25.2 percent) . Since Cologne, the media have been driven by the claim to take a closer and comprehensive look. In the reporting on violent crime, however, the exact opposite occurred: a one-sided focus on foreign suspects.