For many it is as big as possible wealth an important goal in life, driven by the desire for financial security, but also recognition and of course materialism. The good news: Wealth can be earned, especially the first ten years in the job are of great importance. Here it is already clear who will later earn the big money and who will not. It should not be forgotten, however, that there are other types of wealth that have nothing to do with money. What constitutes wealth, why you shouldn't only think of financial wealth and how wealth can be achieved ... 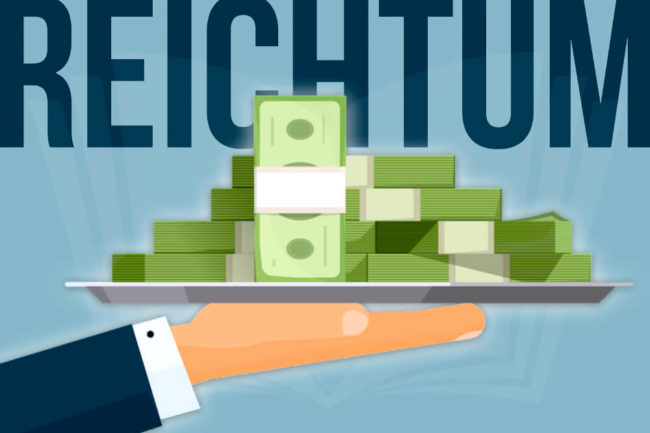 Definiton: What kinds of wealth are there?

At first glance, it seems too small to describe wealth. Most people think of wealth when they think about it Money and material goods, Motto: Rich is someone who is a millionaire, has a dream house and dream car and has enough money to never have to work again.

We also notice that in the typical Synonyms for wealth:

At the same time we all feel that this cannot be the last word in wisdom and definition. It is not either.

„A rich man is often just a poor man with a lot of money.„

This is a fine bon mot from Aristotle Onassis. He had to know: the Greek shipowner and billionaire was considered the incarnation of a super-rich in the sixties.

What we understand by wealth depends on highly subjective and, in some cases, highly emotional values. Anyone who only thinks of money when it comes to wealth ignores the fact that it is different Types of wealth gives:

That's why Wikipedia has a nice definition: Wealth denotes the abundance of intellectual or objective values. Whereby you still talk about the word abundance can debate wonderfully. He is actually already rich who has enough what he has. True to the bon mot: Wealth starts in the heart. 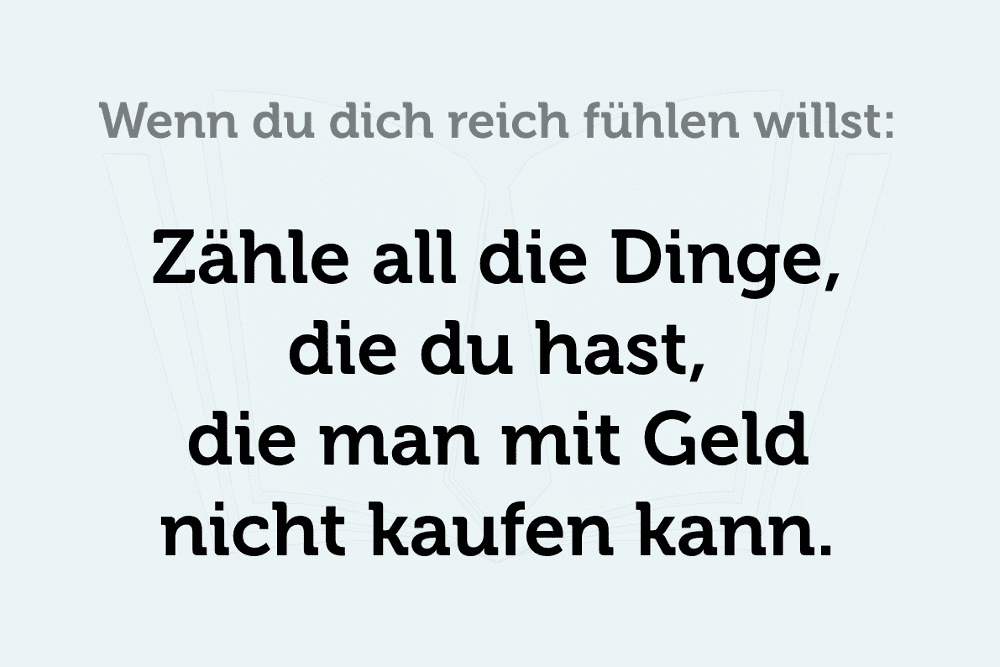 Financial wealth: the first years of work are decisive

At a young age, the starting salaries are usually not that high. Although some jobs and industries can look forward to a significantly higher salary than others right from the start, the basic rule applies: As professional experience grows, pay also rises.

Nonetheless, the first few years of employment are particularly decisive for later wealth. Behind this is a simple calculation example: The less you earn at a young agethe slower your lifetime income will develop in percentage terms. An example:

Salary increases are usually negotiated on a percentage basis (for employees) - and that is exactly what makes the starting salary so crucial. Whether someone starts at a young age with an annual gross salary of EUR 30,000 or receives a 5 percent premium every three years with EUR 50,000 makes an enormous difference:

(Assumption: every three years a salary increase of 5 percent)

A wealth that finances a small house in the first ten years. Not to mention the effects of the differences over several decades, especially if the money is well spent.

It also shows how important it is to have regular salary negotiations. A regular increase in pay by several percent makes a huge difference and can amount to several hundred thousand euros over your entire professional life.

Of course, none of this means that you can't do another big one later Career and income jump could do. But even with this, in the remaining years of work it is hardly possible to catch up on what others have already achieved through a good income in the first few years.

This finding is supported by an income study (PDF). The result: Anyone who later had great financial wealth had a steep climb in their first ten years of work Increase in income book. For average earners, on the other hand, this curve remained much flatter from the start.

Or expressed as a percentage:

Whereby the the biggest leaps in the first ten years took place and thus also allowed the percentage growth to rise more strongly. Or as the saying goes: The first million is the hardest ...

Gap between rich and poor is growing

What does wealth mean in Germany? After all, Germany is considered an industrial nation and thus one of the richest countries of the world. Unemployment has been falling for years, so the prerequisites for making wealth should increase as a result?

That may be the case, but apparently not on a large scale. The numbers speak a different language. As the rich get richer, the poor get poorer - and the Medium-sized companies are slowly crumbling away. This also increases the gap between rich and poor.

At least that is the result of a study (PDF) by the Institute for Economic and Social Sciences (WSI) under the direction of Dorothee Spannagel.

According to this, the poverty rate has risen significantly faster than the proportion of the rich in recent decades. What the study also revealed: In contrast to before, the structures have evidently changed more solidified. Those who are poor find it more difficult than before to escape from it.

There are also clear east-west differences. Poverty is six times as common in the east as represented in the west. When you think of wealth in Germany, strictly speaking, mostly male West Germans - they make up the clear majority.

When it comes to material wealth, it grows Gap not only in this country. Globally, wealth is increasing. With North America and Western Europe, just under a fifth of the world's population has two thirds of global financial assets.

You can learn to get rich

I'm sure you all know these positive ones Affirmations and sayings that some life and money coaches regularly call their students Wealth mantra and magnet hammering in:

Please forget this idiocy and the whole thing Millionaire formulas. The only ones who get rich are the coaches, trainers and farmer catchers who come with such humbug Attracting droves to their overpriced courses in search of a quick buck. In every book and business guide for 20 euros there is more and smarter.

Thomas C. Corley for example, she really knows her way around the world of the rich and beautiful. For five years he kept a close eye on 233 rich and 128 poor people, carefully studying their daily routines, hobbies and quirks.

The result is his book "Rich Habits", in which he the recipes for success of the well-heeled analyzes and reveals. The quintessential millionaire stalker: Unsuccessful people have bad habits. Which in turn means that everyone has the Big money chance has - as long as you quickly turn your bad habits into positive ones.

Or to put it another way: One can learn to be rich. We provide the best tips for you as free PDF download HERE to disposal.

Are the rich really getting richer?

It is an age-old thesis that scientists keep putting to the test: Are the rich actually getting richer and richer, and does wealth create even more wealth as a result?

To answer this question, Daniel Kondor and his colleagues from Eotvos Lorand University in Hungary examined pretty much all transactions in the digital currency BitCoin that could be found on the Internet. So the researchers reconstructed one financial history - as far as possible - every account, and traced the evolution of the money flow (see also here).

Lo and behold: Anyone who held a popular node in this virtual currency network attracted more attention and their prosperity rose more rapidly than that of the normal people. Or short: The rich actually got richer.

The phenomenon is also known by the name Matthew Effect. The real discoverer of this effect is the American sociologist Robert K. Merton, who also gave it its name.

Whether out of envy or a genuine thirst for knowledge, Merton in 1968 dealt with the question of why certain scientists are cited more often in books, studies and articles than others. He soon discovered that the Awareness not an insignificant role plays:

Ever more prominent was one of his colleagues, the more likely he was to be quoted by others, which in turn further increased his fame. Or as the Americans put it today: success breeds success.

We can do the effect today in almost all areas of life observe. Those who are rich benefit from tax breaks more than the average earner. Good students, on the other hand, are more noticeable in school and are therefore usually more encouraged by the teachers than the annoying problem cases.

And top decision-makers, once they have achieved a certain status, usually hardly need to worry about their future jobs.

The 4 Biggest Myths About Wealth

Anyone who ponders about wealth cannot help but come to an agreement Myths to deal with who persistently work around it. Although there is a real core in some of them, Half-truths but stay there anyway.

All of this brings us back to the definition of wealth formulated at the beginning: Only what you understand by it does Wealth is worth striving for. And happiness can also be found in a functioning relationship, healthy children, fulfilling job, and other areas. Because that's the good news: It doesn't cost anything to be happy. Just a couple of minutes.

Do you have what it takes to be a millionaire? These 18 questions show it

Speaking of wealth: Jaime Masters wanted to be a millionaire herself. She has not (yet) succeeded in doing this, but she is a good step further.

Because on the way to the first million, she interviewed numerous millionaires and soon recognized them in the conversations numerous parallels.

From this she finally distilled 18 questions, which supposedly are a strong indication of whether you are too Millionaire stuff to have.

Of course, none of this is a guarantee of really getting rich. But if you do more than half of the following Answer questions with "Yes" the chances are - allegedly - quite good ...

1. Do you often think about how to make more money?

2. Do you pay attention to values ​​and spend less than you earn?

3. Do you already feel successful in many things, but are unsure whether you can build something of your own?

4. Do you feel called to bigger things, but do you have the feeling that everything is moving too slowly?

5. Do you believe that success and prosperity are in your hand - regardless of others?

6. Do you want to give people more, but currently feel unable to do so?

7. Do you want to leave something to the world?

8. Do you want a meaningful job, not just one that is well paid?

9. Do you want to become a better person through personal growth?

10. Have you already tried out business ideas that have failed but do not diminish your desire to test further ideas?

11. Do you only sleep four to five hours a night because of your ideas?

12. Are you afraid of the idea of ​​working for others for the rest of your life?

13. Have you always wanted to be in control of your time, but feel like you are just getting by?

14. Do you feel restricted by your boss and don't want someone to tell you what to do?

15. Do you actually want to travel more, but don't have enough vacation to do it?

16. Read success stories and think: What is it that makes these people so successful? Why haven't I made it yet?

17. Do you still daydream about what you want to be later on?

18. Do you think you have to wait until retirement to enjoy life?