Will Antarctica ever be warm again?

Humanity is turning back the climate clock

The future is the past: mankind is in the process of recreating past epochs in climate history - times that no one has ever experienced. As a study reveals, the Earth could experience a climate in 2030 that was last seen three million years ago. But if climate change continues unchecked, we could even conjure up the extreme warm period of 50 million years ago - with potentially fatal consequences.

In the course of the earth's history, the climate has experienced ups and downs time and again. Global temperatures varied from extremes such as the Ice Age to tropical warm periods with palm trees even at the poles. But for about 10,000 years - since the beginning of the Holocene - the earth's climate has remained relatively stable, apart from minor fluctuations. Fortunately for the human civilizations that developed during that time.

But that is now beginning to change: If climate change continues like this, we threaten to leave the safe climate zone of the Holocene, as Kevin Burke from the University of Wisconsin-Madison and his colleagues have determined. "The earth system is moving towards climatic conditions that human societies have not yet experienced - neither in the history of agricultural civilizations nor since the emergence of modern humans around 300,000 years ago," they warn.

Because even in the warmest period of the Holocene, around 6,000 years ago, global mean temperatures did not rise as high as they are today, according to the researchers. At that time the maximum was around 0.7 degrees above the pre-industrial values ​​of the early 19th century. But we have long since exceeded this maximum: the earth is already around one degree warmer than it was around 200 years ago, as the latest climate data confirm.

Which past epoch suits you?

But what does this mean for the future of humanity? "All historical climate data and pre-industrial climates are no longer suitable as analogs for the climate of the 21st century," explain Burke and his colleagues. With the help of climate models, they therefore looked for times in recent geological history that most closely match the climate predicted for the next few decades.

"We can use the past as a yardstick to understand the future," explains Burke's colleague John Williams. For their study, they used the climate scenario of unchecked warming (RCP 8.5) and one in which climate protection at least mitigates the warming (RCP 4.5). “We're currently somewhere between these two scenarios,” says Burke. The researchers have now examined what the consequences would be by looking back.

Three million years back in 2030

The result: as early as 2030, the earth's climate could correspond to that in the middle of the Pliocene - a time when temperatures were 1.8 to 3.6 degrees higher than the pre-industrial reference values. At that time giraffes and ancestors of the antelopes still lived in Europe and the sea level was significantly higher than it is today. We are still only on the way to this warm period, but we have already exceeded the maximum carbon dioxide values ​​of this era of around 400 ppm. 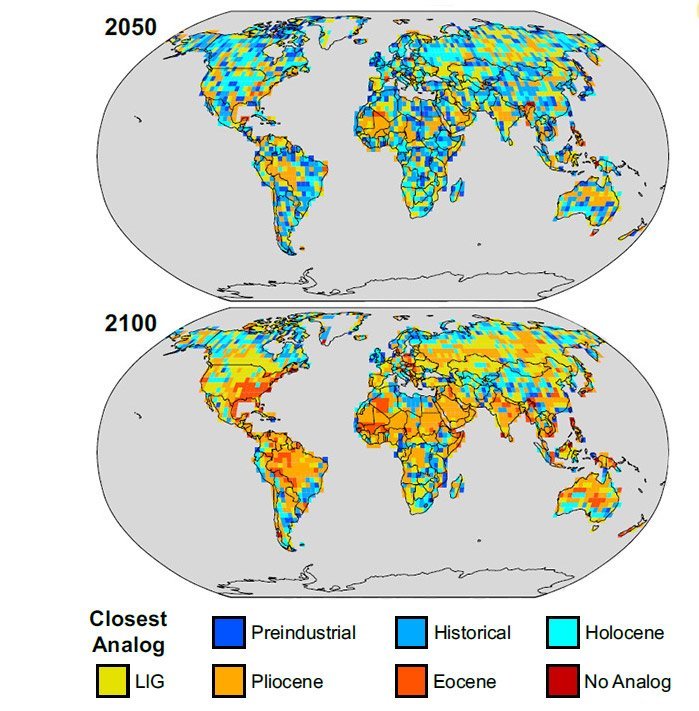 The problem with this: around three million years ago, nature had tens of thousands of years to get used to the gradually rising temperatures. Today, however, the changes are happening in just decades: “Our analyzes raise serious concerns about our adaptability, say the researchers. "Because the climate changes of the coming decades will occur significantly faster than in climate history."

But things could get worse: If it were not possible to prevent unchecked climate change, then an even more extreme phase of the earth's history could return - the temperature maximum of the Eocene. According to the calculations by Burke and his team, the earth could reach this analog in some regions in the interior of the continents as early as the year 2100.

"The unchecked warming of the RCP 8.5 scenario corresponds to a decrease in the climate by around 50 million years - in just two centuries," the researchers say. At the height of the maximum temperature at that time, the global mean temperatures were around 24 degrees - today it is around 15 degrees. There was hardly any ice in the polar regions and even the Siberian Sea had a water temperature of up to 27 degrees. Many animals adapted to the heat and drought by becoming smaller, in the ocean there was a mass death of some animal groups due to lack of oxygen and warming.

For the future, this could mean that many regions will experience a climate that has never existed in human history, as the researchers explain. Such unprecedented conditions are to be expected especially in East and Southeast Asia, in northern Australia and the coasts of the American continent. "In 2100, equivalents to historical and pre-industrial climates will be rare and predominantly in arctic regions," said Burke and his team.

According to the scientists, their results are cause for concern, but not cause for resignation. Because one could still prevent the big climatic time jump. All climate researchers now agree that this has to happen quickly. Some even fear that even a slight further warming could destabilize the earth's climate to such an extent that a new hot period can then no longer be avoided. (Proceedings of the National Academy of Sciences, 2018; doi: 10.1073 / pnas.1809600115)