Can Millennials Save the World?

Generation Y in Greece
CAN THE MILLENNIALS SAVE THE ECONOMY?

What characterizes Greeks between the ages of 18 and 37 years. Your position on the job market shaped by the economic crisis. The dramatic increase in start-ups, the success stories of young people who have turned their innovative idea into a start-up; but also the brain drain - the migration of the best abroad.

What Ioanna Fotopoulou has already achieved at the age of 27, most of her peers have not even achieved when they are twice as old. She has received international prizes and grants for her social commitment, created start-ups from the ground up and experienced defeats, and received numerous awards. Originally from Thessaloniki, she now works as a management consultant in Athens and is co-founder of the Simple Rocks platform, which offers internet marketing services.

Ioanna is a shining example of the millennial generation in Greece. A term that sociologists, politicians and the media use to describe the generation that was born between 1980 and 2000 and their special characteristics. The young people of this generation bring everything with them: They are well educated, technologically sophisticated, travel, watch pay TV and are constantly networked on platforms that offer them multiple levels of communication. “I observe that Millennials - worldwide, not only in Greece - tend to have professional tasks with social relevance. The ideal no longer just seems to be to find a job that can make a lot of money. We Millennials want money, but most of us want that money to be clean and unrelated to practices that can have a negative environmental or humanitarian impact, ”says Ioanna Fotopoulou.

At the same time, especially in Greece, which is in its seventh year of crisis, many millennials remain excluded from the labor market, cannot use their skills in their jobs or are forced to emigrate abroad. Can the Greek Millennials still be the solution to saving the Greek economy?
"Perhaps they will never be able to own their own apartment and only be able to buy their own car late, but that also means that they will not incur the loans and debts that the older generations carry around with them," notes Dimitra Dimitrakopoulou Assistant professor at the Department of Journalism and Media at the Aristotle University in Thessaloniki. “It is this generation that will produce and consume, so we must hope that they will build a better future for the Greek economy. Until now, however, this generation has had great difficulties in producing and thus consuming because of the economic stagnation. It looks like it will be some time before the situation changes ”.

THE SPRING OF THE START-UPS

The millennial generation is often identified with the start-up phenomenon. Most of these are internet-based companies that start out as innovative ideas, are extroverted and can develop very quickly.
There are now around 1000 start-ups in Greece, many of which are in the planning phase or in the first phase of implementation. 27 year old Ioanna Fotopoulou was involved in the founding of three of these companies. “It's a trend of our time, a new fashion,” she says. “I am currently working in my third company. The first one failed across the board. The second went well until I sold it because I couldn't learn anything and couldn't improve. I think we need to talk about failures. The more failures someone has had in their life, the more they will achieve in their next endeavor ".

Last September, Bloomberg published an article with the "encouraging" title:Millennials - You Can’t Afford a Startup, Time to Get a Job. Panos Zamanis, co-founder of the Greek Association of Startups, notes in this context that the article refers to the American economy, where the young graduates from the big universities prefer to work in large, multinational corporations, for high salaries, than Founding start-ups.
"I do not think that the article applies to the Greek reality, because here, with youth unemployment still around 50%, people can only fall back on a very limited number of options," says Zamanis. He himself does not agree with the general equation of start-ups and young entrepreneurs and adds that “innovative thinking goes hand in hand with experience”. For him, however, the Greek crisis had a major impact on the development of start-ups in the country. “The crisis has forced creative people to realize that the solution is no longer the security of the civil service, which has long been a dream career for many Greeks argued that entrepreneurial risk-taking pays off today - provided that it is based on really innovative ideas ”. He adds, “I think we start-up entrepreneurs have reached a point today that we have been dreaming of for years. In the meantime, the attitude has largely prevailed that only real entrepreneurship is the solution; both for the financial problems of individuals and for the general need for Greece to become competitive ”.

THE SUCCESS STORIES OF THE CRISIS

The Greek crisis has actually produced some very successful start-ups. One of them is Taxibeat, which offers an app for smartphones with which you can order a taxi. The company was founded in 2011 and some time ago its sale to MyTaxi, a subsidiary of the auto giant Daimler, was announced. The purchase price should exceed 40 million euros. Taxibeat's founder, Nikos Drandakis, is around 50 years old, but the average age of his company's employees is 28 years. We asked Phoibi Prosalika, Head of HR at Taxibeat, if Millennials could be the solution to saving the Greek economy.
"Yes. The millennial generation entered the labor market under the conditions of the crisis and has mostly had nothing to lose, as they have often not yet built up anything. You now have to start something from scratch and that makes you more conscious in your actions. A few years ago we lived here in Greece under utopian conditions, which have now taken on realistic dimensions. The Millennial generation was also the first generation to have direct access to the Internet since childhood. She can learn and develop at no additional cost. She can communicate and exchange ideas with people all over the world ”.

Taxibeat isn't the only success story among Greek start-ups. Just a few examples: Antcor, a software company in Patras, has been bought by the Swiss company u-blox. The company Avocarrot, which deals with mobile advertising, was taken over by the Glipsa Global Group. In addition, the start-up AbZorba Games, which has become part of Greentube, an Austrian company for internet games. A few years earlier, the Greek start-up e-food.gr also merged with the German online ordering platform Delivery Hero. 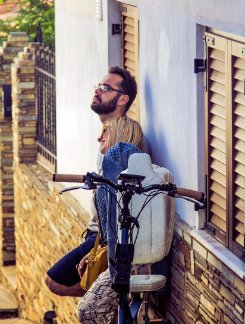 The electric bicycles from Elektronio | @Elektronio Another success story is hidden behind the Greek millennial company Elektronio, as Pantelis Zarkos and Anna Chlioura called their company in Thessaloniki for the production of handcrafted electric bicycles. Elektronio is successful and has now received awards in many innovation competitions, but the road to get there was rocky. “When starting a business coincides with the crisis and all of its negative effects, you have to believe very firmly in what you are working for. First of all it is of course very important to take courage and start. In addition, you have to be fully committed and arm yourself with patience and perseverance. It quickly becomes clear that in such an economically unfavorable environment there is much less room for error, ”explains Anna Chlioura.
When asked whether they might have thought of looking for work abroad before Elektronio, Anna replies. “For some it may be an ideal idea to emigrate and live in a country with better services, better salaries and a better standard of living. But that doesn't mean it's that easy to build a company in an unfamiliar environment and usually against particularly tough competition. For this reason we never really thought about going abroad, because we might have found a job, but then we would never have been able to implement our vision of Elektronio, headquartered in Thessaloniki. Our great willingness to stay in Greece and to live here as we know and love it and to realize our idea here, has ultimately helped us to overcome all difficulties ”.

Brain Drain - The brain drain of the highly qualified

The so-called brain drain is the highest price the Greek crisis is asking. It is estimated that over 200,000 well-educated young people have gone abroad to look for work in the past five years - that's 5% of the country's employable population.
Asterios Samarinas, 31, works as a computer engineer for a company in Luxembourg. After doing his Masters in France, he quickly realized that it was very difficult for him to find his first job after studying in Greece. “Greek companies usually require at least three years of professional experience. There were also some junior positions, but people with ten years of professional experience still came to the interviews, ”he says. Asterios therefore emigrated abroad soon afterwards. He worked for an IT company in Austria for two years and now lives in Luxembourg. “The beginning in a foreign country was difficult. The competition is fierce, but you are judged fairly based on the performance principle. I want to stay here for at least two more years, ”adds Asterios.

Apostolos Potaris, 27, lives in Amsterdam, where he currently works in the marketing department of a multinational corporation. After completing his relevant studies at ASSOE (Athens University of Economics), he completed postgraduate studies in Holland and was thus able to assure himself that the culture there and the opportunities that the country offers him would suit him. “I live differently from my friends who stayed in Greece with a comparable degree. Either they are not paid properly or they have to work endless hours, ”he notes. "My work and the standard of living in Holland allow me to do things that I couldn't do in Greece, for example I make two big trips across European borders every year."

In the end, researching the Greek millennials leaves a bittersweet aftertaste. While they do not carry around the sins of previous generations, they are plagued by the consequences of those sins. They are called upon to structure and rebuild their lives from scratch, which can be challenging but also demanding and daunting.
Dozens of studies have tried to describe millennials - the most representative and interesting statement can be found in the joint survey by the market research institute Harris Poll and the company Eventbrite:
Eight out of ten millennials would rather spend their money on an experience than on any kind of material good.
<?