What is an atomic bomb

What is the difference between hydrogen and atomic bombs?

North Korea announced on Sunday that it had carried out a nuclear test with an advanced hydrogen bomb, also known as a thermonuclear bomb. This would have made North Korea one step further since previous experiments with a first generation of nuclear weapons in the development of nuclear weapons. But how do hydrogen bombs differ from atomic bombs?

The main difference between a hydrogen bomb and an atomic bomb is how it is ignited. With a conventional atomic bomb - such as the two that were dropped by the USA on Nagasaki and Hiroshima in 1945 - the explosive force arises from the fact that the elements plutonium or uranium are split in the atomic nucleus. In an uncontrolled chain reaction, vast amounts of energy are released. This process is called nuclear fission. 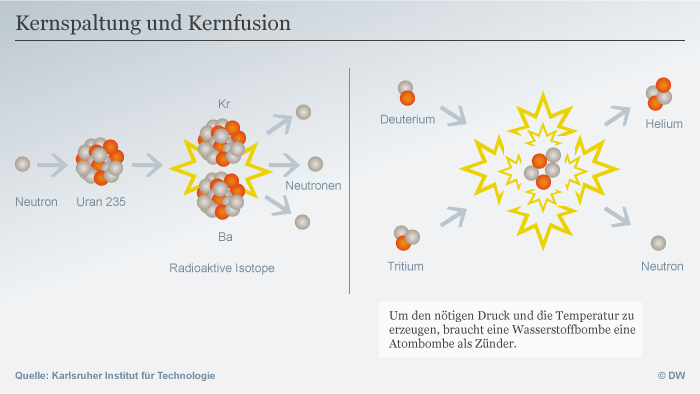 Years after the first atomic bomb was developed in the US state of New Mexico, the United States invented a weapon based on atomic bomb technology. The detonation has been extended so that a significantly stronger explosive force can be achieved. This is called a hydrogen bomb.

Hydrogen bombs are based on fusion, i.e. the fusion of nuclei of the element hydrogen. However, very high temperatures and a lot of pressure are required for nuclear fusion. In order to generate this, therefore, an atom bomb is needed. That is why hydrogen bombs are built in two stages. The nuclear explosive device serves as a detonator.

According to experts, the most recent bomb North Korea tested was very different from previous tests. A photo shows a bomb that has two chambers. This suggests that it could be a two-stage hydrogen bomb.

"The pictures show the shape of a possible hydrogen bomb. With a primary and a secondary nuclear fusion that meet in the shape of an hourglass," said Lee Choon-geun, researcher at the State Institute for Science and Technology Policy in South Korea. 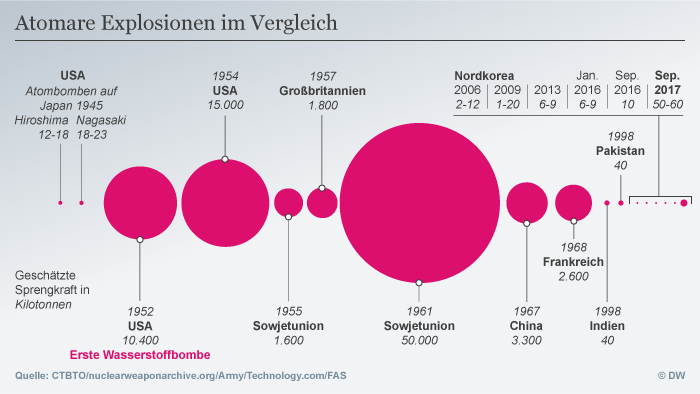