Have we domesticated ourselves?

For more than 100 years, biologists have suspected that modern humans have transformed into "tame" primate in the course of evolution. Now the controversial hypothesis is receiving new impetus: through a find in the human genome.

The story of this discovery begins with a rare hereditary disease called Williams-Beuren syndrome. People who suffer from this syndrome are cognitively impaired and have great problems with spatial perception. What is not immediately noticeable to the outside world, because those affected are mostly eloquent, gentle and sociable. One could also say: They are even more social than “normal” people.

The Italian stem cell researcher Giuseppe Testa has now taken a closer look at the cause of the hereditary disease. Williams-Beuren patients are missing a piece of DNA on chromosome 7, the so-called BAZ1B gene - and then there is a striking anatomical detail: They have a special face shape, their chin is delicate, their foreheads comparatively broad.

The consequences of choosing a partner

"If you compare modern humans with Neanderthals, you see a similar tendency," Testa said in an interview with science.ORF.at. “We have a more delicate face compared to our extinct relative. And we obviously have highly developed social skills. "

Charles Darwin already interpreted these characteristics as signs of self-domestication. According to the idea, humans could have gradually transformed into a “tame” species by choosing a partner. Similar to how the dog, cat and goldfish were made into what they are today, namely pets, through artificial selection. 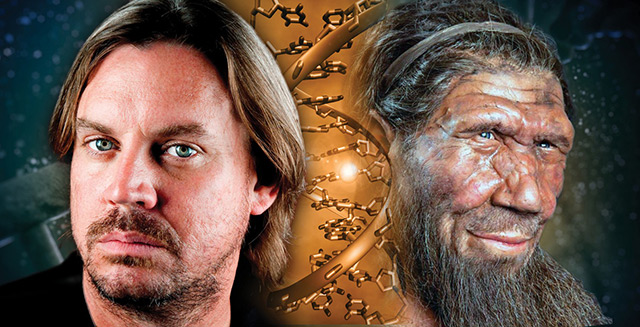 In the course of history, the idea has also been formulated in all kinds of racist variants or misused for ideological atrocities (from the degeneracy theory in the 19th century to Konrad Lorenz ‘racial phantasies in the 1940s). At its core, as an evolutionary biological hypothesis at the interface to culture, it is still debatable: The Japanese philosopher Masahiro Morioka, for example, interprets human civilization as the result of that same self-domestication.

As far as we know today, this is still speculation. But Testa has discovered a few genetic pieces of the puzzle that at least suggest such a reading. According to his experiments, the BAZ1B gene is responsible for the development of the human face - hence the reason why people suffering from Williams-Beuren syndrome have this special face shape.

When Testa examined chromosome 7 in genetic databases, he also found what he was looking for. The BAZ1B gene of Neanderthals and Denisovans apparently differs from the Homo sapiens variant by a few mutations. According to Testa's interpretation, these changes in the genome have also changed the face of modern humans, making them more delicate and childish in their proportions.

It remains to be seen whether the mutations also stimulate social behavior and language skills - and thus BAZ1B became the focal point of domestication. It would be possible: It has been known for about ten years that an additional copy of the BAZ1B gene leads to autism and language difficulties. The symptoms are in many ways exactly the opposite of those in Williams-Beuren patients who lack a copy of this gene.

More on this topic: