Veterinarians wonder if dogs can transmit Ebola. And a new report sheds light on whether illegally imported bushmeat from Africa could cause the virus fever to break out in Europe.

Even if there are still large gaps in knowledge and urgent new developments - such as vaccines against Ebola - are still a long time coming, some secondary theaters of the virus epidemic are now opening up. Recently, the World Association for Small Animal Medicine, the Canada-based WSAVA, presented an assessment of whether dogs can transmit the Ebola virus. And this week the European Food Safety Agency (EFSA), whose headquarters are in Parma, published an opinion examining whether illegally imported bushmeat could bring Ebola from West Africa to Europe. 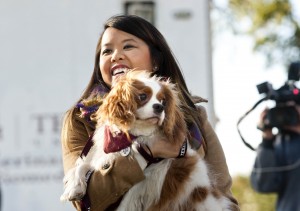 © APNina Pham with her dog Bentley

Such scenarios are not unthinkable. But unlikely. The WSAVA therefore publicly regrets that the dog of the Spanish nurse who was infected while caring for an infected clergyman was killed. The case had caused a worldwide sensation: while the nurse and her husband were in the hospital and adhered to strict quarantine, the dog was first given food and then euthanized in the couple's apartment on the instructions of the authorities. "Sadly, the dog was not tested for the virus," regret the WSAVA veterinary experts. “From our point of view, the available technologies should make it possible to carry out tests and then find a quarantine regulation” - that is in any case better “than an automatic euthanasia of exposed animals”. During these days the World Veterinary Organization FVE followed this view. The Spanish approach should not become a precedent, it said in a statement. Instead, individual decisions should be made on a case-by-case basis in the future. The United States appears to have taken this advice to heart. The spaniel of the Texan nurse Nina Pham was quarantined after its owner fell ill with Ebola. When Pham was released cured, she got her dog back.

Scientific answers to the question of whether dogs can transmit the Ebola virus are rare. The WSAVA is therefore referring to an almost decade-old study in which 440 dogs from affected villages were examined after an Ebola outbreak in Gabon. Almost a third of the animals had antibodies against the Ebola virus. However, the blood samples from the dogs did not contain any virus antigen or viral DNA; the animals were also symptom-free. It remained unclear whether dogs also excrete the viruses - at least temporarily - and thus represent a danger to humans. The authors of the study, led by the French veterinarian and virologist Eric Leroy, recommended at the time that this risk be investigated with experimentally infected dogs in order to better assess the role of pets in future outbreaks. 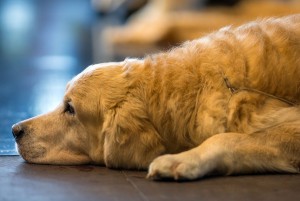 Scientists at EFSA, the European Food Safety Authority in Parma, are following a different lead. You have asked yourself whether so-called “bushmeat”, the meat of illegally hunted wild animals such as monkeys and flying foxes, could possibly be imported into the EU and cause Ebola cases there. After all, it is believed that the current epidemic in West Africa originated in infected animals. Humans have eaten the meat of such animals or have had contact with their excretions.

In their opinion, the EFSA experts conclude that the risk of transmission through bushmeat is low. Bushmeat is sometimes imported illegally, but only in small quantities. Bushmeat consumption is commonplace in different regions of Africa, in view of this the number of different outbreaks caused by it is limited. The authors of the report describe a current study in the “International Journal of Food Microbiology” from this year, which provides initial indications that bushmeat is actually brought to Europe every now and then. The luggage of more than 60,000 passengers from non-EU countries was examined at Vienna Airport. A total of 262 meat products were found; six passengers had bushmeat in their luggage. The bushmeat products came from Nigeria, South Africa and Ethiopia. However, the products were not raw, but smoked, dried or cooked.

Overall, however, far too little is known about the matter. How much bushmeat is imported into Europe in total? How is it handled and prepared here? The experts critically point out all these gaps in knowledge and finally note that thorough cooking (at over 100 ° C) kills the virus. Bushmeat was in all probability one of the central sources in the Ebola outbreaks of the past in Africa. With regard to the export of the virus to Europe, the poached meat apparently plays a subordinate role. However, EFSA plans to further sound out the risk potential of the Ebola virus. In a few weeks, the European experts also want to assess the risk that pets may pose.

Can pets transmit Ebola? Scientists discuss dogs and "bushmeat" as an infection risk

Veterinarians wonder if dogs can transmit Ebola. And a new report sheds light on whether illegally imported bushmeat from Africa could cause the virus fever to break out in Europe.