The very personal opinion of H. Maurer, who believes that the danger posed by too large a population is not discussed enough in public.

In my longer article on the threat to the environment (triggered by the survey in the article The Worries of Austrians), I mentioned overpopulation, which is still growing, as a very big problem, and mentioned some striking data that I repeat here :

When I went to elementary school (just after 1945), the earth had 2.3 billion people. As of the beginning of 2017, it has 7.5 billion. By 2100, even if growth slows down, that number will be 10.5 billion. India, which at that time still included Pakistan, Bangladesh and Sri Lanka, had a total of 97 million inhabitants in 1900. Today, WITHOUT the three countries mentioned, it is around 1.3 billion and with an (albeit decreasing) growth of over 6% per 5 years. During this time Austria has grown from 6 to over 8 million people, has a growth rate of approx. 2% per 5 years on paper, but adjusted for immigrants, a population decrease of 3% per 5 years.

The following diagrams, which can be called up immediately from the geography department of the Austria Forum for any combination of countries, are examples of how the growth of the world's population is developing in different countries. 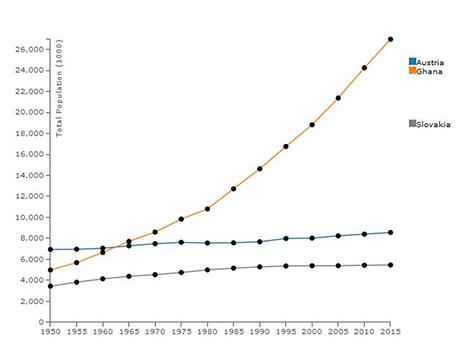 Austria is growing slowly, Slovakia almost not, Ghana rapidly: In 1950 it was half the size of Austria, and in 2015 it is almost three times as large 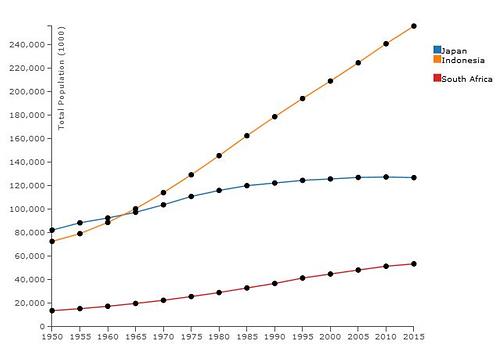 The population of Indonesia has quadrupled since 1955, Japan is beginning to decline slightly, South Africa is growing steadily 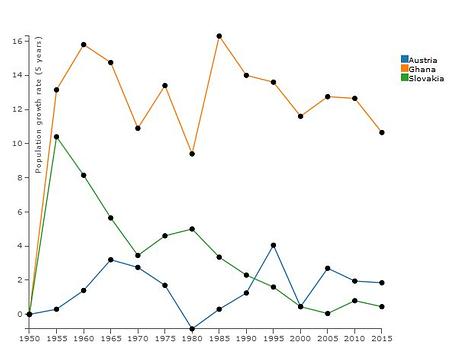 Ghana grows by 11% in 5 years, Austria by 2% (only through immigration), Slovakia is stable 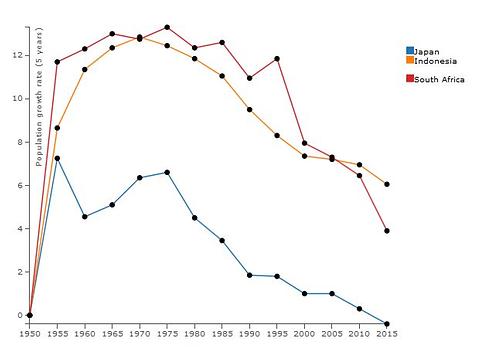 Japan is shrinking somewhat, Indonesia and South Africa's population growth has slowed, but is still at 5% in five years

In a book that grew out of a discussion about BTX (a precursor to the Internet), a discussion that went back 20 years, I wrote, "It is wrong to fear future overpopulation of the earth" (because we already had severe overpopulation at the time). Please read pages 121-127 of the book: XPERTEN 0Der AnfangGraz2004.

What I wrote back then is still true, apart from a few discrepancies in the numbers (as often happens with predictions). I will try to first summarize the consequences from the lines above and then explain that we urgently need to take action. The WHAT is not easy, but I offer provocative solutions and I am sure that a team of thinkers can find much better ones. The future population development, however, is so crucial for all of us and humanity in the future that the problem must not be hushed up, but discussed and lead to action.

A clip that shows how dramatically (by 34%, approx. 2.5 billion people) the world population will grow by 2050 (4:06). Also of interest is the last picture in the film, which shows the change in population figures from 2015 to 2016 based on the 20 largest countries in the world: 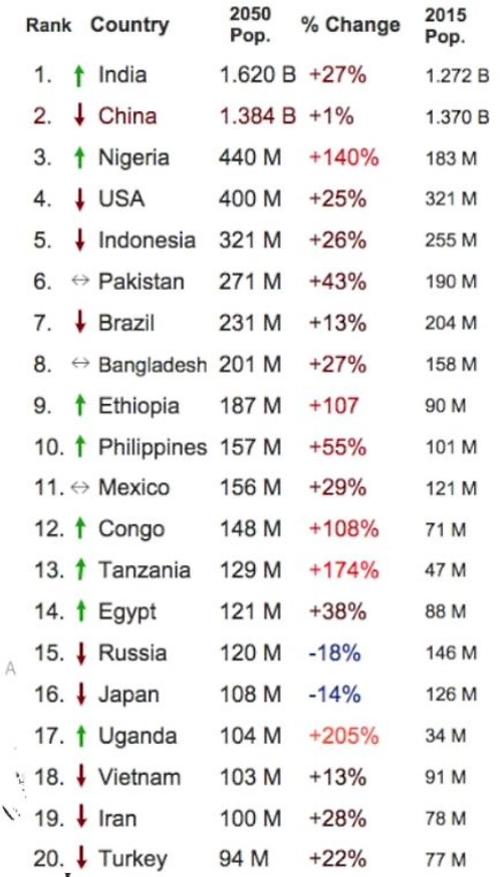 The present world population is so large that humanity can only survive for a certain time at the expense of the future. The point in time in the year (it is now the beginning of August) by which we have already used up all the renewable resources that the earth supplies in one year is advancing.

There are three aspects that are not yet taken into account:

Firstly, we also consume a lot of non-renewable resources such as fossil fuels, ores and other raw materials that can hardly be replaced, of which often only small amounts are available worldwide. A classic example of this is palladium, which plays an essential role in countless applications, e.g. in the construction of catalytic converters in internal combustion engines and in electronics. Because of the low stocks (mainly in Russia and the USA), palladium has become so expensive that it is now close to gold and platinum in terms of price and is therefore around 30-40 times more expensive than silver. When the palladium runs out on earth, a rethink will have to start in many technology sectors.

Second, it does not take into account that the standard of living of 2/3 of mankind is so low that it has to be raised if we want to have a peaceful world in the long term, which will, however, increase the demand for water, energy, food and raw materials tremendously. Water is a good example: 10% of the world's population currently has no access to good drinking water!

Thirdly, the population will continue to grow: from the current 7.5 billion to at least 10.5 billion in 2100. That is an increase of 40% and, due to the growing standard of living, an increase in resource consumption of perhaps even 100%. So when someone thinks that we can achieve something by saving a few percent here and there, reality is overlooked.

Taken together, the above arguments mean that the population must (gradually!) Shrink to less than half, let's say 3 billion people worldwide. Austria is also too densely populated. An Austria with only 3 million inhabitants would solve almost all problems of energy generation, traffic congestion, urban sprawl, garbage disposal, food supply, etc.: The quality of life would increase significantly.

In this sense it is incomprehensible that in discussions about topics such as climate change, the environment, etc. the population figures are never taken into account. This almost taboo must be broken.

In most European countries, the population would decrease significantly anyway (we have a reproduction rate of less than 1.5 in Europe; a reproduction rate of 2.1 would be necessary for a constant population). This means that countries like Austria can easily achieve a population reduction of 1% per five years by reducing (not stopping!) Immigration, i.e. by 50% after a few generations. The outcry from politicians that we need an immigration of young workers because of the age pyramid is not justified: Increasing automation will allow an increasingly smaller percentage of the population to provide for everyone in a reasonable way. The reason that some non-innovative, traditional large-scale companies may scream is that one can earn more with cheap labor. I wish all companies healthy growth, but this has to happen through innovative methods, not through cheap labor. As unpopular as it may sound: I consider child support for one child per family to be good, but hardly for two children anymore, and from the third child onwards the support should be negative: It just has to get into the mind that the world doesn't have too many people endures.

I think, to put it hard, parents have to decide whether they want to go on a great vacation every year or buy a yacht, or whether they want to have a large group of children around them, who in any case pose great challenges for each parent. I have little understanding for families with many children, where both parents work intensively and deport the children to kindergartens and all-day schools.

If the 1-2 child family becomes the standard in Austria / Europe, I would be in favor of promoting multi-family houses (for 3-4 families) instead of single-family houses, with a certain common infrastructure (laundry room, table tennis room, swimming pool, barbecue area, ... ) in order to prevent the children from becoming isolated and to have an "extended family" where a couple can go on vacation without children without a guilty conscience, see my age-old article in XPERTEN 0Der AnfangGraz2004, for which I was very much at the time was attacked, as might happen again this time.

Even if Austria, in Europe, succeeds in gradually reducing the population (over generations) to 50%, how is that supposed to happen where many more people are or will be living today if we don't help. I consciously say: help, don't intervene. How can this be done?

First, we are triple our development aid. BUT: It can only be accessed from a country where the reproduction rate is below 2.0, i.e. the population is no longer increasing, but is slowly falling. This is the "reward trick".

Second, we try to understand the phenomenon of large families. On the one hand, they go back to the fact that those affected know too little about birth control, or on the other hand, many want children as old-age insurance. This last aspect should not be overlooked: in many countries, which today have high population growth rates, there is no sensible health and pension insurance, but you NEED children to look after you later. This means that a large part of our development aid should flow into sensible medical and retirement provision.

The approaches described are probably not the philosopher's stone, mainly because they do not take into account the diversity of cultures and problems caused by children are taken as seriously in some peoples as lung cancer by chain smokers. Better methods must also take this into account and at the moment I don't know any answer other than "education" or "pressure through reward". In addition, one is confronted with the fact that population size usually also means greater economic and military strength. But: To this day, an Israel asserts itself in a predominantly hostile environment, not through its size, but through its innovative strength.

This article is deliberately provocative and in parts exaggerated. But this is the only way to achieve what is actually necessary: ​​to make people aware that too high a population is putting increasing pressure on the world, the environment and the quality of life. Help us by making more meaningful suggestions: Here in the Austria Forum you can use the function in the menu (top right) "Comment on contribution" to announce any comments, approval or rejection, etc. ... you only have to register once as Register user of the Austria forum. You can also do this under a pseudonym. The Austria-Forum stores your email address in encrypted form, nobody from the Austria-Forum team knows it. You will not receive any additional SPAMs or the like by registering. Why should Africans come to Europe? ... where Europe is already far too densely populated by comparison?

Here are the numbers:

Of 41 countries in Europe, all but six have a population density higher than that of 36 of Africa.

So: Europeans are quickly emigrating to Africa, there is still a lot, a lot of space!

First of all: I see no remedy at all against the impending end of the world. By "end of the world" I mean that, because of the population bomb, we will have a world that will be so unworthy of life that one can dream of today's world in the "1st world countries" (e.g. Europe) as a paradise from which one was expelled, but which just went under.

Using the example of development aid: starting there will / cannot work. In order for EH to be effective, there would have to be structures in the countries to which it is given (also in the minds!) That make development aid superfluous. A contradiction in terms. - At the moment, development aid ends up - to put it bluntly - partly as Rolls-Royces and Ferraris in the garages of various African potentates, partly in the coffers of arms manufacturers and dealers, partly to alleviate the terrible misery of a pitiful population. Structurally, it does nothing. At best, the recipient countries are saved from even greater impoverishment, in a certain way - horribile dictu - the terrible conditions are thereby prolonged.

In any case, the topic of "overpopulation" should come up to change something. In 20 years it will be too late.