France wants the crown, Ronaldo too

Defeated the world champion, now the title should come. "We can arouse emotions and make you forget your worries," said coach Didier Deschamps after beating Germany 2-0 in the semifinals. "The win against the world champion is a particular joy for us. We have shown them, our abilities and our enormous qualities," added goalkeeper Hugo Lloris. However, the captain of the Equipe Tricolore urged his teammates to discipline. "There is still one step left. We have to get back from cloud nine very quickly, have to concentrate again. If we can do that, it will be very difficult to beat us."

Griezmann wants to hold up the trophy

Since Thursday evening at the latest, France has also had a new soccer hero: Antoine Griemann, who with his two goals in the semifinals won the knockout. of the German national team and with already six goals will almost certainly be the top scorer of this EM. "My only goal is to hold up the trophy on Sunday," said Griezmann. "It's going to be a big game, an important game." For the third time after the European Championship in 1984 and the World Cup in 1998, hosts France want to close a home tournament with a final triumph. Opponents on Sunday at the Stade de France in St. Denis (Kick-off at 9 p.m. CEST, from 8.30 p.m. on DW livestream) is Portugal. 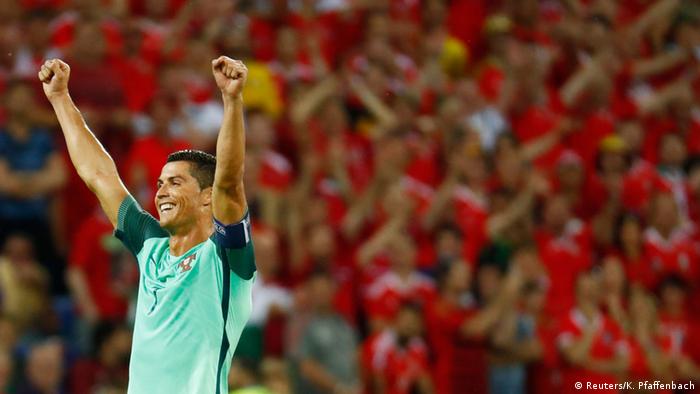 Superstar Cristiano Ronaldo, the linchpin of the Portuguese team

Ronaldo's dream of a big title

Cristiano Ronaldo & Co. also dream of winning the European Championship. "Now we have to get ready for Sunday and make our dream come true," said Ronaldo. The captain, record player (132 international matches) and record scorer (62 goals) of the Portuguese national team has already won many titles with various club teams and has received a lot of honors. The 31-year-old superstar has so far been denied a title with Portugal in a major tournament.

In 2004 he was very close to him. As the youngest player on the team at the age of 19, he experienced Portugal's bitter 1-0 defeat in the final against outsiders Greece at the European Championships. At the EURO in France, Ronaldo has already scored three times, most recently in the 2-0 victory in the semi-finals against Wales. "Even if I ended my career today, I would feel privileged," said the three-time world footballer during the European Championship. "But I've never denied that I would love to win a title with my national team."

Santos: "We always have a plan"

Host France is the clear favorite not only among betting providers, but also for most experts. While the Portuguese fought their way through to the final largely with minimalist football, France thrilled with offensive power and already scored 13 goals in this tournament - more than any other team. However, coach Deschamps does not want to know anything about the role of favorites. "That will be open," said the success coach. "Just because we kicked Germany out, we don't have any additional staff."

From the Portuguese perspective, the balance sheet is sobering. In the past ten duels between the two nations, there was not a single victory against France, the last success so far was 41 years ago. Coach Fernando Santos sees no psychological disadvantage for his team: "Portugal shouldn't be afraid of other teams. We believe we can beat any opponent." The 61-year-old can count on defensive boss Pepe again, who returned to training after his injury-related loss for the semifinals. "We're not the best team in the world but it's not easy to beat Portugal," declared Santos confidently. "We always have a plan."