What is side pressure exerted by liquid

Hydrostatics - pressure in a liquid at rest

When you cool a beer bottle in water, a certain pressure acts on it. In the next eight minutes we will explain how you can determine it.

Pressure calculation in the resting state

you can then calculate it exactly. 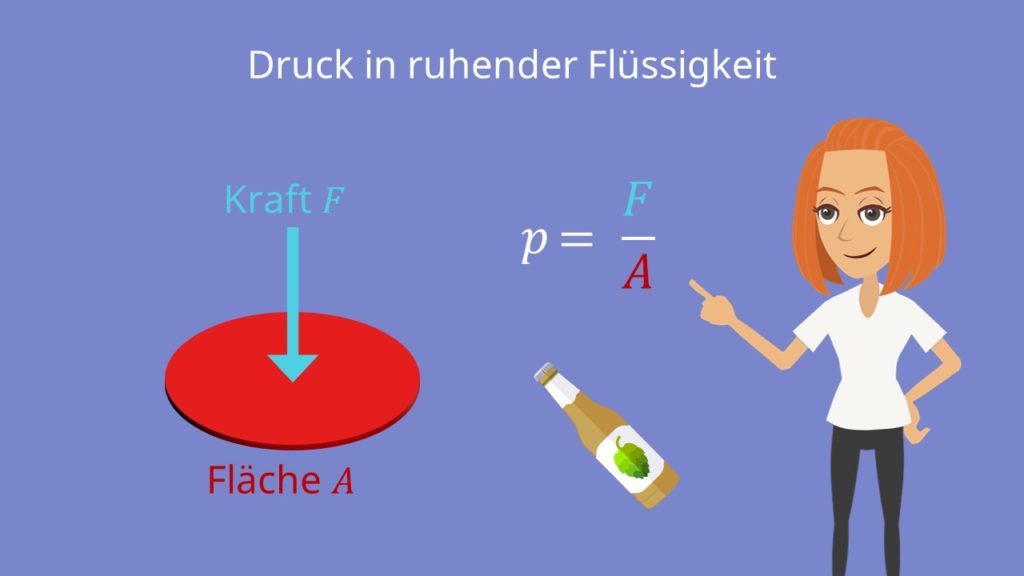 You've probably heard of air pressure. This means that the air acts on a surface with a certain force and pressure is created. Now you will certainly ask yourself whether the air that constantly surrounds us also exerts pressure on us and other objects. The answer is yes. This pressure is the so-called ambient or atmospheric pressure

, which is always 1 bar. It is exactly the same in liquids. The liquid acts with a certain force on a surface and thus exerts pressure. The surface can either be the walls of the container in which the liquid is located or a body that is located in the liquid.
However, it is not so easy to calculate the pressure here. Other influencing factors must also be taken into account. So that you understand this, the best way to explain it to you is by means of an example.

Imagine you have a container that is filled with a liquid and does not move. Now you put a rod in the shape of a cylinder in it horizontally. First we only consider the pressure in the x and y directions.
As you can see, there is pressure on the rod in the x and y directions. The question now is: When is the cylinder in equilibrium, i.e. when does it not move left or right, or forwards or backwards? 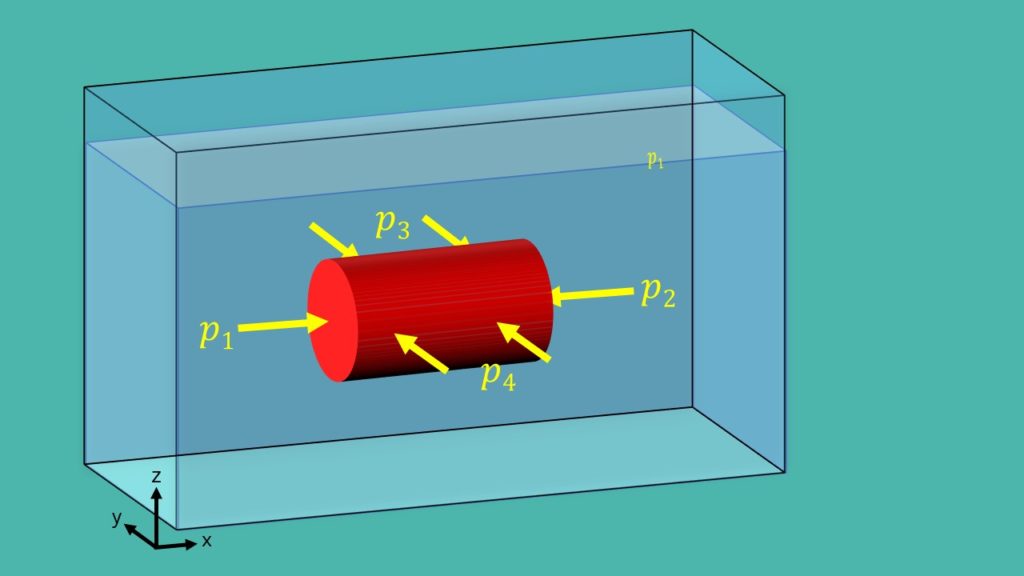 From the sketch one can conclude that p1 = p2 and p3 = p4 must be for this. Since there is no x or y here, the pressure does not depend on x and y.
In order to be able to view the pressure in the z-direction, we change the sketch a little. To do this, the rod is placed vertically instead of horizontally in the container. Since we are now looking at the pressure along the z-axis, the weight of the rod also plays a role here.
The pressure now acts on the top and bottom of the cylinder's face. In order to know when the rod is in equilibrium, we now determine the equilibrium of forces.

to F and use them for F1 and F2. The weight Fg is the mass m times the acceleration due to gravity, so

The formula is now

You know from physics that mass equals density times volume, that is

is. V in turn is calculated by area times height, i.e.

Because according to our sketch

applies, you can now for the crowd

write. If you put the mass in the previous equilibrium condition, you get

. If you now divide by A and after

dissolves, you see that here is not just the pressure

occurs, but also the height h. So the formula is

Since this formula only relates exactly to our example, we will explain the general case to you.
The pressure

is the ambient pressure

the depth pressure sought p. In general, the formula for calculating the pressure is thus

Let's summarize this again: The pressure in a stationary liquid does not change in the x and y directions. But it increases linearly with increasing water depth h.
Even if the pressure does not depend on x and y, the liquid can still exert pressure on walls. Does that sound confusing? Don't worry, it's all half as bad. We will explain it to you again using an example.
You have a container filled with a liquid. However, it now has a small rectangular flap on one side through which the liquid can flow out. But since you don't want anything to get out there, you press against it with your finger. You now want to know how much force you have to hold against it? To do this, you should first find out what force the fluid is exerting on the valve from the inside.

So how big is the force on area A? The fluid pressure acts from the inside

. As you have just learned, this can be done with the formula

Now the question arises why you are here

. Using the sketch, you can see that z is the distance from the surface to the hinge of the flap.

is nothing other than the position of the surface center of gravity of the flap. So for a rectangle

. But be careful: with the formula

you have to pay attention to where the coordinate system is and adjust the signs accordingly!

What you also already know is that

Because not only your finger strength but also the ambient pressure acts on the outside, this must also be taken into account. With

you can then calculate the total force exerted on the flap:

Are you now betting for

then you get the following equation:

Since the force is seen as a magnitude anyway and applies in the direction of the associated vector, the minus can be omitted. As you can see, apparently only the part of the force generated by the liquid alone remains. The ambient pressure is completely eliminated and is therefore unimportant.

For you this means that the force that you have to apply must be just as great as the force that the fluid exerts on the wall or on the flap.
You can optimize the whole thing by pressing with your finger exactly where the force of the fluid acts on the flap. But where is that? Can you calculate that? Yes you can. Even relatively quickly.
To do this, we set up a moment equilibrium around the hinge of the flap. That means we consider the forces with their point of application that cause the flap to move around the hinge. As we have already established, the force of the fluid pushes from within and the ambient pressure from outside. The distance from the hinge to the point of application of force is the so-called lever, which we designate with y. So the equation is: 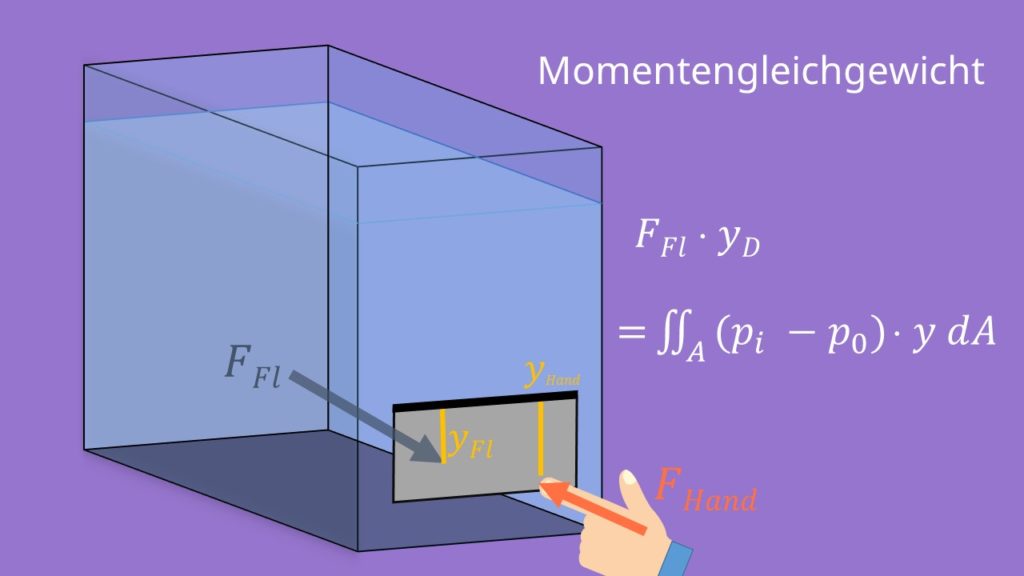 is the position of the point of application of force, which does not automatically correspond to that of the center of gravity.

you get by inserting it

is described as the moment of inertia of a body around the x-axis. This will be with

designated. Now let's write instead of the integral

As you already know is {

. But since we only need the distance from the hinge to the center of the area,

With Steiner's sentence, we are almost there. This sentence reads: {

- Insert the equation, you finally have the finished formula. So this is then

For other surfaces, you can look up this formula in the formula collection.
So, now you are well informed about the pressure in a liquid and how it affects different constructions. Take care and see you soon.