Who is the President of AIIB 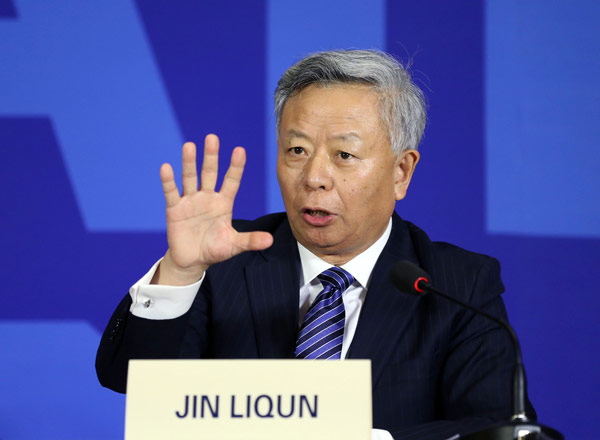 President of the AIIB, Jin Liqun

A total of 30 of the 57 future founding members of the Asian Infrastructure Investment Bank (AIIB) have so far recognized the bank's statutes and will become "full members", as the first president of the AIIB, Jin Liqun, announced on Sunday. The 30 members represent more than 74 percent of the shares in the bank. The statutes are an essential requirement for the bank to be legally effective and members must pass them in domestic law before the end of this year in order to become full members. The statutes came into force on December 25th last year.

"I am committed to running the bank to the highest possible standards as set out in the articles of association for transparency, openness, accountability and independence," said Jin, who will be President of the bank for the first five years. Speaking of the bank's oversight mechanism, Jin said there would be a clear division of responsibilities between the board of directors and management. The AIIB will have a special department for compliance with rules, effectiveness and integrity, which reports directly to the board of directors. “It is important that not only is something great on paper, but that it is actually carried out. [...] As President of the Bank, I will ensure that the supervisory mechanism is implemented without compromise. We have the confidence to tell the world that we mean what we say. We will achieve the goal of building the AIIB into a true multilateral financial institution with the leadership of the 21st century, ”said Jin.

China also assured that the country would not apply for loans from the AIIB in the initial phase. The AIIB's priorities are not to support domestic projects, said Shi Yaobin, the Chinese vice finance minister. Other countries have more urgent need to improve the infrastructure. The first batch of loans should be approved before the end of this year, Jin said.