How did Liszt get so good

The pianist Franz Liszt composed piano pieces that are so difficult that no one but him could play them. Thousands of tones pounded down on his audience at breakneck speed. A key lion was born! But Franz Liszt was more than a piano virtuoso: all of Europe raved about him ...

The music academy in Weimar is officially called the Liszt University of Music Weimar. Liszt would have been delighted. The composer, pianist, conductor and music teacher Franz Liszt campaigned for a long time to establish music schools and the first German "orchestral school" was actually founded in Weimar, where Liszt lived and worked as a conductor for a while. Every student has been trained in all orchestral instruments, piano and conducting!

And not only there, also in Budapest, the music academy today bears the name of the famous Hungarian artist: The Franz Liszt Music Academy was even founded personally by Liszt in 1875. Hungary was part of Austria at the time and Liszt grew up speaking German. Although he always felt like a Hungarian, he didn't learn Hungarian until he was old and wasn't very good at it ...

Franz Liszt himself had a good musical education: his father Adam was an administrative officer for Prince Esterházy and played the cello in the orchestra under Joseph Haydn. Little Franz came into contact with excellent music at a very early age. The father recognized the boy's talent and sent him to the best teachers in Vienna, Carl Czerny and Antonio Salieri. At the age of nine he gave his first piano concerto. The young Franz traveled all over Europe with his ambitious father and was celebrated as a child prodigy and "reborn Mozart". When his father died, Franz was only 15 years old. The loss was so bad for the young pianist that he did not perform for two years. At that time he was living in Paris with his mother. To earn money, he taught piano.

This is the Parisian air ... 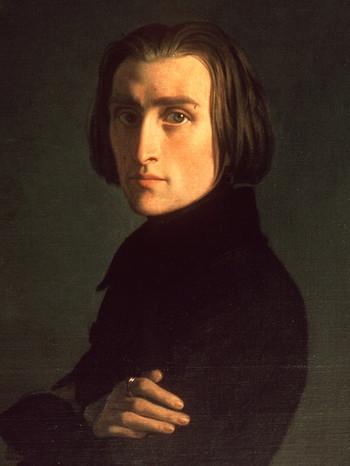 To sniff "Parisian air" was very stimulating and very exciting for artists of the time: Paris was an important musical center back then! By the time Liszt was 20 years old, he had already got to know many famous composers personally: Frédéric Chopin, Niccolò Paganini, Gioachino Rossini, Vincenzo Bellini, Giacomo Meyerbeer, Hector Berlioz and Felix Mendelssohn Bartholdy - the crème de la crème! However, Mendelssohn expressed himself very disparagingly about Franz Liszt and Chopin even called the former boy prodigy a "pianistic zero".
Liszt had some catching up to do and practiced like crazy! As a pianist he was also successful, he became a piano professor in Geneva. But initially nobody wanted to hear his compositions. It was said of him that he was "unable to compose". But he persisted and from 1840 he was celebrated in Paris not only as a piano virtuoso, but also for his piano compositions.

Successful - as a pianist and composer 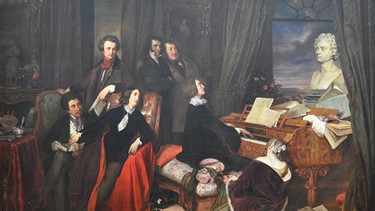 Liszt was now one of the most important piano composers in Europe. He lived in Italy for two years, traveled across the continent and finally settled in Weimar as a conductor. There he wrote his most important compositions and took care of the performance of contemporary music, among others by Robert Schumann and Richard Wagner, with whom he was friends.

The current music of this time was sometimes controversial, as was much that is new and unfamiliar to the ears. Liszt himself developed the form of symphonic poetry. This is a symphonic orchestral work which - in contrast to the classical symphony - consists of only one movement, but in which the tempo can change frequently. A symphonic poem is always based on a "program", that is, an idea. Liszt was very committed to program music because, in his opinion, listening to a work helps the audience to know the ideas that inspired the composer to create his music.

A trailblazer for the new

Liszt not only wrote music, Liszt also wrote a lot about music: that is, he tried to make his ideas of how music should develop in his time understandable to others. Liszt is considered to be one of the main representatives of the New German School, which published its articles in the Neue Zeitschrift für Musik and campaigned for new paths in music. He founded the General German Music Association and organized music festivals.

Liszt was present at the first two Bayreuth Festival founded by Richard Wagner. When he traveled to the Bayreuth Festival for the third time, he was already seriously ill. Shortly afterwards, at his funeral, he met high-ranking musical celebrities for the last time: the composer Anton Bruckner played the organ and improvised on motifs from the opera "Parsifal" by Richard Wagner.