Life as a doctor is always tough

A few minutes extra for a birthday: In the Apollo cinema, the 25th anniversary of Luc Besson's "Léon - The Professional" will be celebrated with a director’s cut 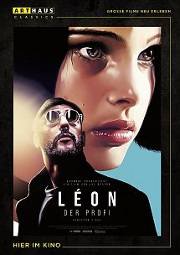 She was able to lay the foundation for her career with her portrayal of Mathilda in 1994: Natalie Portman in "Léon - The Professional", movie poster

When I was with friends in France when I was 15, we held regular film evenings. At the top of the list were, of course, films by Luc Besson, and I would have to lie if I said that “The Fifth Element” was not permanently burned into my top 50 list. Shortly before I returned to Germany, we watched this one film that influenced me even more: “Léon”. Or how the title was expanded to German: "Léon - Der Profi". I remember exactly that I found the beginning of the film to be very brutal (after all, a child was shot and had to cry terribly at the end. And also that the legendary sentence Mathilda (played by Natalie Portman) uttered in the film how many other people have not let go to this day: "Is life always so hard, or only when you are a child?"

By the time I was 15, the film was long out of theaters. Unfortunately, that's how it was with a lot of good films that I would have loved to see on screen. Fortunately, we are still surfing a retro wave uninterrupted today. It's not just fashion that repeats itself, thanks to various anniversaries, the films keep popping up in the cinema program. That is why “Léon - The Professional” can now be seen a few more times in the cozy Apollo cinema. And if you still have no idea who this Léon is and why Matilda aka Natalie Portman thinks she's asking the big questions in life, here's a charming introduction.

"Léon - The Professional" is a thriller or action film by Luc Besson and dates back to 1994. At the center of "Léon" is the eponymous protagonist Léon (Jean Reno), who lived his life in New York through his work as a contract killer for the Italian mafia financed. As taciturn as he is and ice cold, he submits to his own moral guidelines. He would never give a hair a blow to women or children. When almost the entire neighboring family is wiped out, his life changes drastically. Only twelve-year-old Mathilda survived because she was shopping at the time of the murders. Unsuspecting, she seeks protection with her neighbor Léon, who reluctantly lets her in. Mathilda swears revenge and wants to bring down the murderers of her family. To achieve this goal, she wants Léon to train her as a professional killer.

As early as 1994, the film received high praise on the one hand, but was also criticized for the implied sexual tension and questionable relationship between Léon and Mathilda on the other. Many scenes that would have made “Léon - The Professional” look even more drastic have been cut out. For the 25th anniversary, a director’s cut version is finally being released, which does not contain all of the cut scenes, but at least some of them and therefore stretches the film by a full 22 minutes. It is also this version that is running in the Apollo cinema today and will not only attract newcomers to the cinema, but also die-hard Léon fans.