How did you get into the Kaaba?

Central shrine of the Muslims in Mecca

The "Kaaba" (cube) is the holiest building in Islam and is considered by Muslims to be the oldest church in the world. It is an almost cube-shaped building around which the great mosque in Mecca, the "Masjid al-haram", was built. The Kaaba is covered by a black curtain ("kiswa") made of silk and cotton, into which the Shahada and Quranic verses are embroidered with gold thread. The "Kiswa" is renewed every year after the Hajj. The inside of the Kaaba is locked. The building is only opened twice a year for the purification ritual.

Muslims all over the world align themselves with the Kaaba for their prayers (“Salat”) five times a day. The direction of prayer (“Quibla”) is displayed in every mosque. During the "Hajj", the great pilgrimage, the seven-time circling of the Kaaba ("Tawaf") is an important ritual. 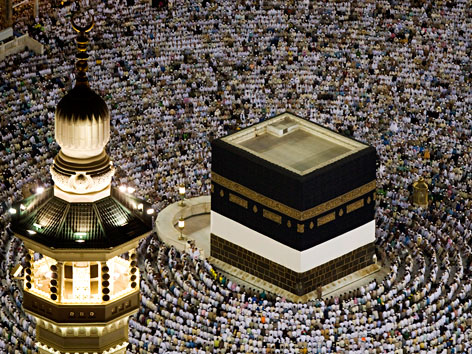 During the pilgrimage, the pilgrims circle the Kaaba. Muslims all over the world use the Kaaba as a basis for their daily prayer.

Black stone as part of paradise

The "black stone" (Arabic: "al-Hajar al-aswad"), which is now set in gold, is embedded in the eastern corner of the Kaaba. According to legend, Archangel Gabriel brought him out of paradise. On the pilgrimage, the pilgrims try to touch or even kiss this "black stone", but this is not possible for everyone because of the crowds. The pilgrims want to follow the example of their prophet Mohammed, who also kissed the "black stone", but do not worship the stone as such. 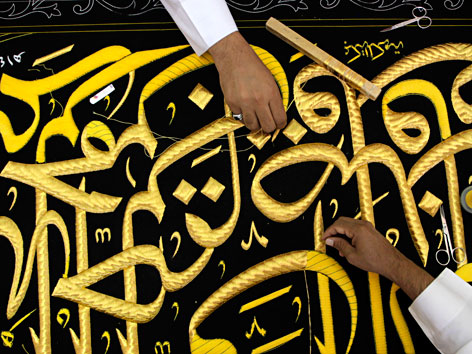 Every year the black, gold-embroidered cape of the Kaaba, the "Kiswa", is renewed.

The Kaaba was already a place of worship in pre-Islamic times, in which the god Hubal in particular, but also other pre-Islamic deities such as al-Lat, Manat and Uzzat were worshiped. Even then, the Kaaba - and thus Mecca - was at the center of pilgrimages. After the arrival of the Muslims in 630, Mohammed freed the Kaaba from all idols, but otherwise left it unchanged.

A history of renovations

The Kaaba had only recently been rebuilt by members of the Meccan Quraish tribe in the year 600 after it had been badly damaged by floods and a fire. According to the Koran, the holy book of Muslims, the Kaaba was built by Ibrahim (Abraham) and his son Ismail as a holy shrine for the worship of the one God. According to legend, however, the first person, Adam, built the Kaaba before it fell into disrepair and was forgotten.

Over the course of history, the Kaaba has had to be renovated and rebuilt repeatedly. The damage to the Kaaba in 930 by the Karmatians, a radical Shiite group of Ismaili tendencies, who also kidnapped the "Black Stone" was particularly drastic. In 1629 the Kaaba was destroyed by heavy rains. The Kaaba has not changed its appearance since it was rebuilt in the same year with Meccan granite.

The immediate vicinity of the Kaaba is also of particular importance to Muslims. In front of the northwest wall is "Abraham's Square" (Arabic: "Maqam Ibrahim"). Pilgrims try to get there after circling the Kaaba to say a personal prayer. The shrine contains the stone on which Abraham is said to have leaned when building the Kaaba. In the immediate vicinity of the “Maqam Ibrahim” and the “Black Stone” is the “Zamzam” well, with whose water the god Hagar, Abraham's wife, and her son Ismail are said to have saved from dying of thirst.